BNS
aA
Some 5,000 people gathered outside the Lithuanian parliament in Vilnius on Thursday afternoon to express discontent with the failed parliamentary vote to impeach MP Mindaugas Bastys and the performance of the ruling Lithuanian Farmers and Greens Union (EU). 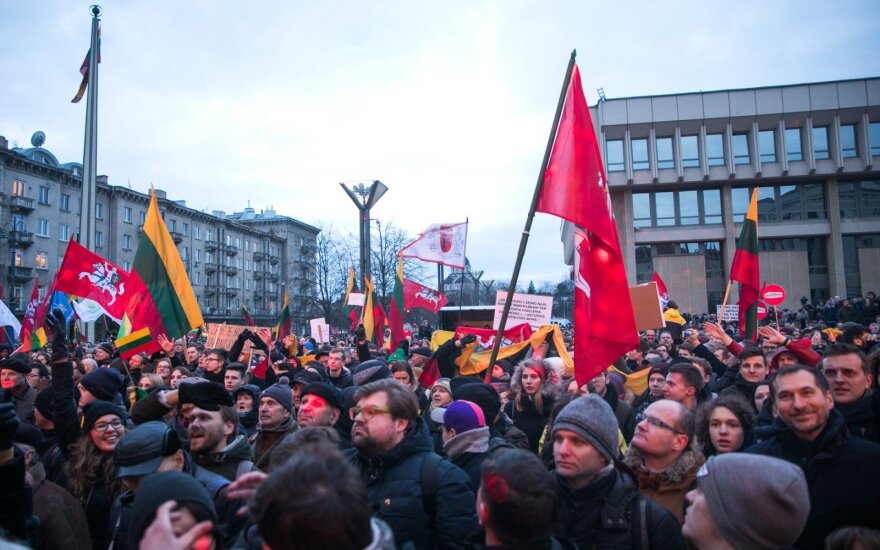 The event in the Independence Square was organized by Laisvės TV, an online television station set up by journalist Andrius Tapinas.

"As citizens, today we are telling the institution in a nice manner with flags – we accuse you today," Tapinas said on the stage.

"This parliament trampled over the ruling of the Constitutional Court and managed to keep the mandate for a person who was found by the superior legal institution of our country as having grossly breached his oath and cooperated with KGB agents," he added.

Related articles
V. Nekrošius: there is no chance of snap Seimas elections
Thousands expected to protest in Vilnius against failed impeachment of MP Bastys

Some of the participants brought Lithuanian official and historic flags. A few flags of the opposition conservative party can be seen close to the stage.

One of the participants held a slogan saying Russia's Karbauskis in Our Land, referring to Ramūnas Karbauskis, the leader of the ruling LFGU. Other slogans called upon the parliament to stop breaching oaths and selling Lithuania.

Police representatives told BNS that around 5,000 people were present in the protest rally.

"I'm sick of it. The entire system, Karbauskis, (Health Minister Aurelijus) Veryga and the gang," Aurelija, 64-year-old Vilnius resident, told BNS when asked to explain why she came to the event.

She said she could not specify a single good thing that the 2016-2020 parliament had done so far.

"It is time that they ceased to govern us," said the woman, expressing support to early elections.

Benas, 15-year-old school student from Vilnius, said he was protesting against the Seimas ballot on Bastys' impeachment.

"Mindaugas Bastys breached the Constitution, he breached the MP oath, such people cannot be members of the Seimas, they cannot decide on our laws. This was the last straw," said the teenager, also criticizing the recent restrictions imposed on alcohol sales.

"I believe there should be efforts against alcohol addition but the efforts here look like we were Saudi Arabia. Fully unnecessary prohibitions. I believe the efforts should be finding alternative things to do instead of banning," he added.

The event is supervised by the police force, including some officers in civilian clothing. Parliamentary Speaker Viktoras Pranckietis and other politicians also joined the event.

Held under the slogan We Accuse!, the event was organized by Laisves TV after the parliament failed to garner enough votes in a secret ballot on Tuesday to strip Bastys of his mandate despite the Constitutional Court's ruling that the lawmaker had grossly violated the Constitution and breached the oath by concealing his ties with Piotr Voyeiko, a former KGB agent.

V. Nekrošius: there is no chance of snap Seimas elections

Laisvės TV , an online television station set up by journalist Andrius Tapinas , is organizing a...