BNS EN
The unsanctioned protest rallies that kicked off in Minsk and other cities of Belarus against the so-called unemployment tax give more capacities to the Belarusian opposition, one of the country's opposition leaders Anatoly Lebedko has said in Vilnius. 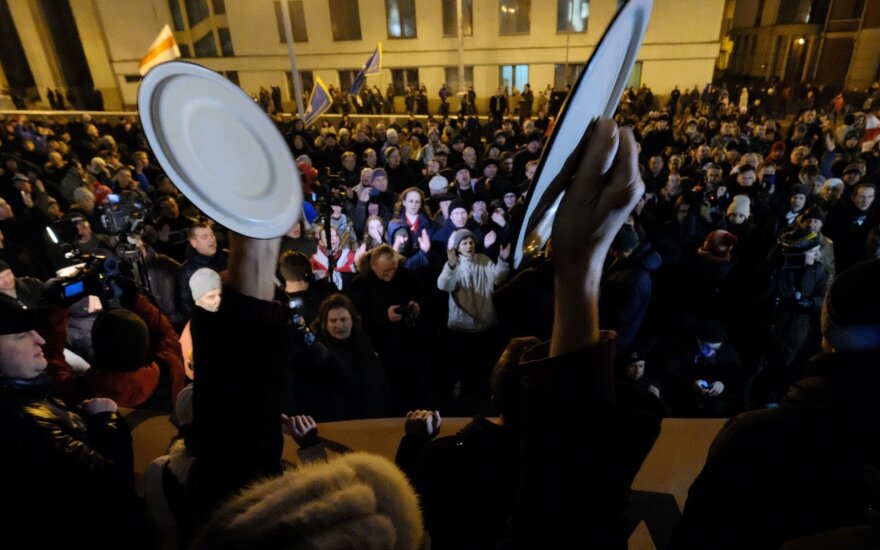 "I am starting to like today's situation, people are starting to realize that there is no need to wait for Santa Claus. (…) This gives capacities and a possibility of changes for opposition," Lebedko said during a discussion organized by the parliamentary group For Democratic Belarus and the Eastern European Studies Center.

He emphasized that people took to the streets, knowing they would take part in unsanctioned rallies.

Vital Rymasheuski of the Belarusian Christian Democrats emphasized that opposition had to join the protest rallies.

"We have to be present in the protests, as otherwise we're not opposition. (…) If the opposition does not control the protests, this will be done by pro-Russian forces," he added.

Another Belarusian opposition activist Sergey Kalyakin, the leader of the Just World (former Communist) party, maintained that 20,000-25,000 people would take to the streets on March 15 instead of the current 2,000. In his words, the people of Belarus have already seen that the protests will not trigger any repressions.

"Something unique happened in Belarus – this time they did not even fill out protocols for violation of public order. People realized they could protest," he added.

On Friday, thousands of people walked the streets of the Belarusian capital to protest the tax on unemployment introduced by the country's hard-line President Alexander Lukashenko. The annual tax is about 224 euros for persons who have worked under 183 days in the past year.

The Belarusian attitude towards the Astravyets Nuclear Power Plant (NPP) under construction in its...