BNS
aA
Saulius Skvernelis will remain Lithuania's prime minister under the coalition memorandum signed by the leaders of three political parties in Lithuania, and the Social Democratic Labor Party of Lithuania will nominate a new Seimas speaker. 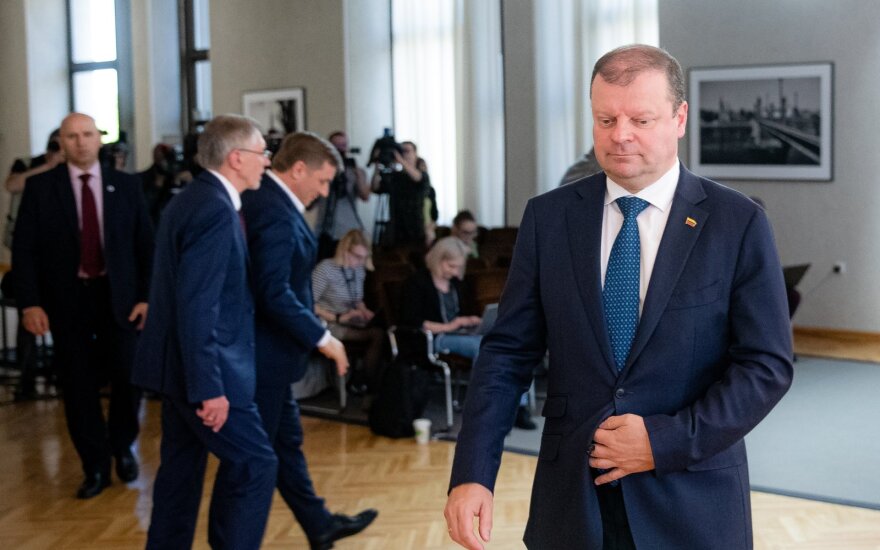 "It’s been agreed that Saulius Skvernelis remains prime minister, and the position of the Seimas speaker belongs to the Social Democratic Labor Party of Lithuania," Ramunas Karbauskis, leader of the Lithuanian Farmers and Greens Union, told BNS Lithuania on Thursday.

Viktoras Pranckietis, representing the LFGU, is now speaker of the Lithuanian Seimas.

Karbauskis says Pranckietis "is acting inadequately", arguing about his chances of staying in the position.

"Every self-respecting politician has to realize that he is not appointed forever but he is appointed until the coalition agreement is in force, and he represents the ruling majority," the politician said.

The LFGU leader says Pranckietis "will become ridiculous to anyone who has at least some knowledge of politics."

"If he thinks that he'll be able to stay in this position, let's imagine how that will look like. (…) He will definitely not represent the ruling majority. It will be a Seimas speaker who represents himself," Karbauskis said.

Pranckietis on Thursday expressed his surprise at why the Seimas speaker's position was included into the coalition talks, saying that "it's a statutory position elected by the Seimas," and it might be discussed during the start of the parliament's work.

The speaker also cited the Statute of the Seimas, which states that the speaker is elected for a term of four years and might be dismissed in specific cases.

BNS Lithuania was not able to contact the Seimas speaker or his spokeswoman on Thursday afternoon.

Karbauskis says the agreement on the positions of prime minister and Seimas speaker is part of the ruling coalition memorandum signed on Thursday. In his words, Skvernelis plans to introduce President-elect Gitanas Nauseda to the memorandum on Friday, and if he approves the principles of the ruling majority, Skvernelis will stay as prime minister.

Skvernelis said earlier in the day he would meet with Valdemar Tomasevski, leader of the Electoral Action of Poles in Lithuania – Christian Families Alliance, on Friday to discuss the future coalition. Tomasevski, however, said his party is in no hurry to join the ongoing ruling coalition talks.

SDLP leader Gediminas Kirkilas told journalists after the meeting his party wants three ministerial portfolios in the government, first of all, the social security and labor.

The Order and Justice party would like to get two ministerial positions, its leader Remigijus Zemaitaitis said.

Karbauskis says agreements on the position os prime minister and Seimas speaker have been reached yet, and the ministerial positions and the parliamentary committees will be divided during later negotiation stages.

A coalition of the LFGU, SDPL, the Order and Justice party and the EAPL-CFA would have 77 seats inb the 141-seat Seimas.