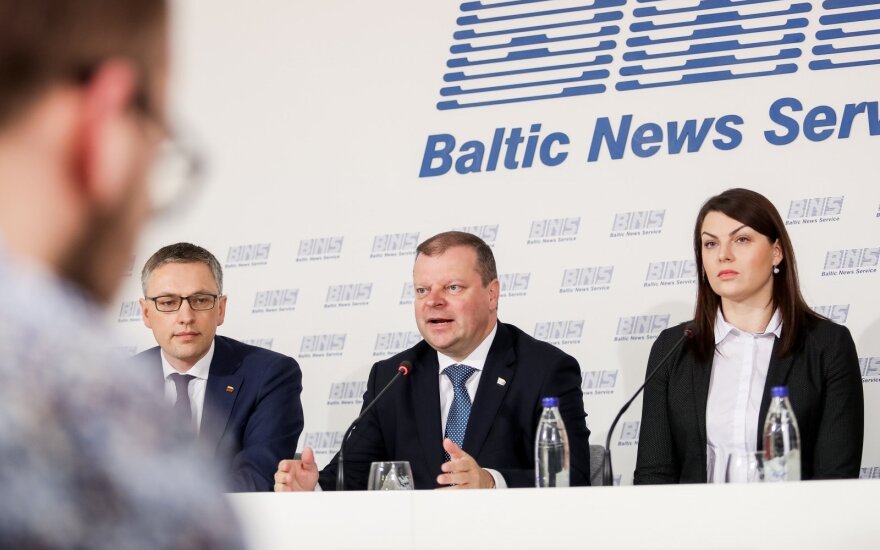 Firstly, he stated that decisions made before through individual laws impoverished the most vulnerable citizens and were signed by the president. "All these laws were signed by the Lithuanian president, not making use of the opportunity to defend the weakest members of our society, thus I will never sign under a budget, which is potentially anti-constitutional and will pre-program the decrease of social welfare, whether through pension, wage or social benefit cuts," S. Skvernelis said.

In terms of foreign policy, the PM pledged to focus on strategic partnership and "moving from personal, emotion-based foreign policy to foreign policy primarily ensuring and defending our national interests." This, according to him, would include seeking a bilateral cooperation format with the US and a bilateral meeting of the two countries' presidents.

Related articles
Skvernelis’ campaign intrigue: three famous women will endorse him
Skvernelis after meeting Matijošaitis: I do not want to discuss the presidential elections

S. Skvernelis also spoke negatively of Lithuania's decision to vote in favour of the UN resolution, which described US President Donald Trump's decision to recognise Jerusalem as the capital of Israel.

D. Grybauskaitė's foreign policy toward Russia and Belarus also faced criticism, with the candidate seeing no positive signals, which would allow to re-establish contacts with Russia, however at the same time, he was against "such extremes as we saw."

"I would not want to have such extremes as we saw, when one day you are hugging the Belarussian president and shaking hands with Putin, but after a time, Lithuania becomes the only country in the European Union, which does not have any political contact with the countries I mentioned," S. Skvernelis said.

Skvernelis after meeting Matijošaitis: I do not want to discuss the presidential elections

On Friday Prime Minister Saulius Skvernelis visited projects being developed in Kaunas and met with...