BNS EN
aA
Saulius Skvernelis who has made a successful career from a police officer to candidate for Lithuania's prime minister has never lacked determination or ambition. His impulsive character has so far won him public support, however, can become a challenge in search of complex political compromise. 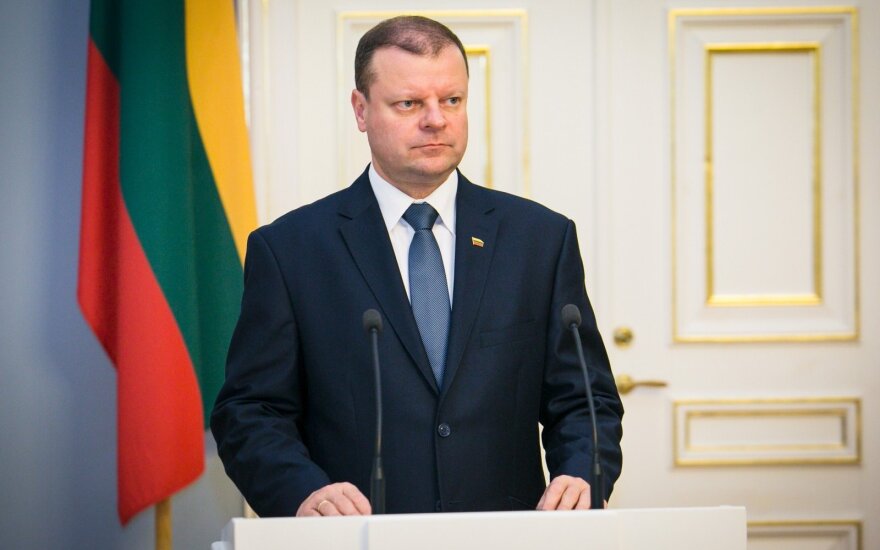 "As the minister of the interior, he could feel when his position should be stated. It was sometimes different than that of heads of other institutions, for instance, the president or the Seimas speaker. He simply matched the public sentiments," political scientist Ramunas Vilpišauskas told BNS.

From Police To Politics

Born in Kaunas, Skvernelis graduated from a secondary school in Marijamoplė and from the Vilniaus Gediminas Technical University with a degree in mechanical engineering. At a later stage, he acquired a degree in law at the Mykolas Romeris University. He taught at the Police Academy, headed the public police at the Trakai Police Commissariat and later the traffic police there.

In 2008, Skvernelis was appointed deputy police chief and was promoted to Lithuania's police commissioner general in 2011. As the police chief, he boosted public confidence in the police force, however, discussions about the police reforms he initiated are still a subject of discussions.

After resignation of Alfonsas Dailis Barakauskas from in the wake of corruption in 2014, Skvernelis was appointed to replace him in the post of interior minister.

"It was both joy and understanding of the responsibility he faced. His understanding that he would have to leave the job he loved, to take off his uniform, to put his shoulder-straps on a shelf and wear a costume of a politician. This is a once-in-a-lifetime thing," said Lithuania's border chief Renatas Pozela who was in Morocco together with Skvernelis on the day of his appointment.

His fellows in the interior system recall Skvernelis as a demanding and ambitious chief.

"Whether someone likes it or not, he has always been emotional and, at the same time, a very tough chief – he used to put his opinion in a very strict manner. I have never seen anyone object him. You cannot take away his ambition, determination and pursuit of goals," Sergejus Madalovas, former head of the Public Security Service, told BNS.

During his term as the interior minister, Skvernelis topped Lithuania's popularity lists and constantly compete with President Dalia Grybauskaitė and Prime Minister Algirdas Butkevičius for the leading position among the most popular politicians.

Skvernelis on a few occasions made front-page headlines over conflicts with then Parliamentary Speaker Loreta Graužinienė – through his spokesman he has dubbed her as coming out of nowhere, a phrase his spokesman later insisted on having invented himself. The interior minister has also said questions from Graužinienė kept him from doing his work amid the Vilnius police efforts to catch a dangerous fugitive armed with an automatic weapon.

After Lithuanian border guards gunned down a suspected smuggler two and a half years ago, he publicly rebuffed Grybauskaitė who had accused the officer of excess weapon use: "Never kneel before injustice, violence, pressure and fear," he wrote in an emotional letter to the country's officers.

In the run-up to the 2016 Seimas elections, a few political parties started inviting him to their candidate lists, however, Skvernelis decided in spring to lead the list of the Lithuanian Peasant and Green Union, resigning from the Interior Ministry.

"When you choose a party you go with, you chose a political force where you can play the first violin. We and the Liberals already have enough leaders and he could hardly expect to be the first violin with us. This is the main reason why he chose the Peasants and Greens. It is a logical and pragmatic move," Algirdas Sysas, former chief of the election bureau of the Social Democratic Party, told BNS.

During the election campaign, Skvernelis accentuated social issues and spoke in support of higher taxes in an effort to help the most impoverished part of the population. The politician said he would also support initiatives to lower the value-added tax on the most necessary food products, however is against rapid growth of minimum monthly wages.

On some issues, he is more liberal than the party's leader Ramunas Karbauskis - Skvernelis backs legalization of same-sex partnership and is against abortion bans.

Skvernelis, 46, is not confident about his command of the English language, noting he was working on improving his skills. During a broadcast a few months ago, he refused to give an English-language answer to Andrius Tapinas to a question about the three main goals to be pursued by the Peasant and Green Union, should it win enough mandates to form the ruling coalition.

In his free time, Skvernelis enjoys watching basketball games and working in the garden, often humming songs by Lithuania's legendary music bands Foje and Antis. His library mainly consists of history books, while Three Comrades by Erich Maria Remarque is his favorite book, telling about lives of World War One veterans in Berlin of 1928.

In the last months of the 2016 parliamentary election campaign, Skvernelis had to shift his focus to his family after birth of his son. The candidate also has a small daughter. This is his second marriage.

Lithuanian President Dalia Grybauskaitė on Monday signed a decree accepting the resignation of...