BNS
aA
The Lithuanian parliament's Committee for Legal Affairs is working to establish whether Lithuania could have provided Turkey with information about uses of ByLock chat app. Ankara maintains the app had been developed specifically for mobilization of coup supporters, and having it on a mobile was a sufficient reason for arrests. 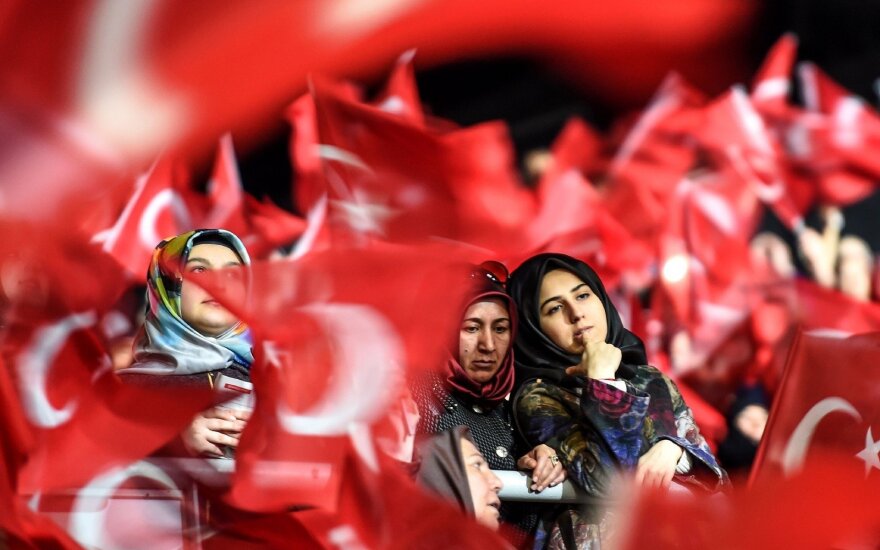 At a Pro Government demo in Turkey
© AFP / Scanpix

The parliament's panel was approached by the Human Rights Monitoring Institute (HMRI) for a check of validity of reports in the Turkish media about Lithuania's cooperation on ByLock consumer data. The committee's chairman Julius Sabatauskas confirmed to BNS that the probe was in progress, adding there was so far no data to prove Lithuania's complicity.

Related articles
The EU-Turkey Refugee Agreement must be brought to an end!
Foreign Minister slams efforts to block Istanbul deal amid religious reasoning

"There have been written inquiries, we now want to have a verbal conversation to be able to reply to the Human Rights Monitoring Institute. We want to establish the fact and find out whether there was collaboration but have no data so far," he added. The issue will be discussed at the committee's meeting behind closed doors on Wednesday.

HMRI representatives said they did not want just to establish the validity of the Turkish media reports about Lithuania's assistance to Turkey but also to analyze the situation in general – whether there are enough safeguards in international cooperation agreements against the use of transferred information for persecution.

"As there has been a similar case with Ales Belyatsky and provision of his data, we asked to establish whether there are sufficient safeguards in international cooperation agreements to prevent such cases, i.e., if Lithuanian institutions can project that the data could be used for prosecution, they would envisage safeguards to be able to refuse providing the data," she added.

Reports appeared in the Turkish media in January that Ankara had secured cooperation with Lithuania and received data about ByLock app users who were suspected with links with Muslim spiritual leader Fethullah Gulen who Turkey accuse of organizing the 2016 attempted coup.

Turkish Foreign Minister Mevlut Cavusoglu has postponed his official visit to Lithuania, which was...