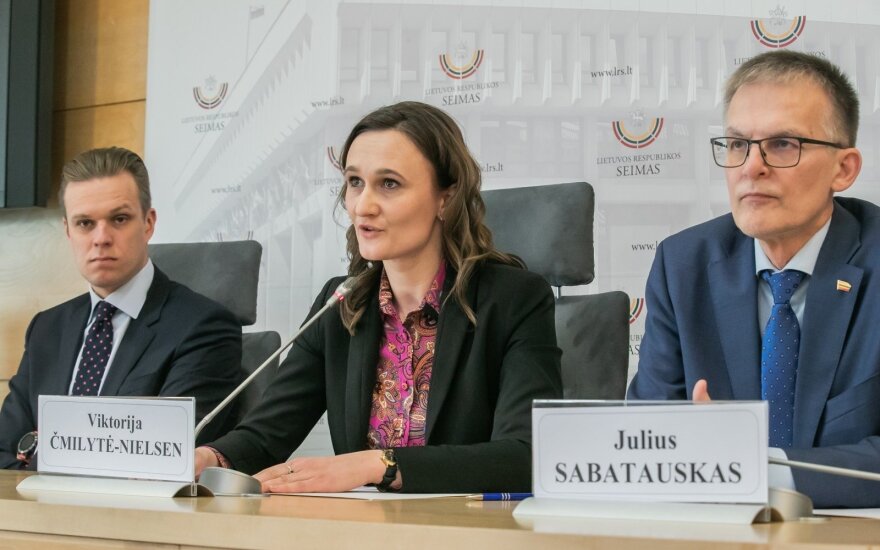 During a Friday press conference, the opposition parties declared that the post of opposition leader would go to the Liberal Movement Seimas group prefect Viktorija Čmilytė-Nielsen.

The post of leader should be handed to the Social Democrats this autumn and to the Conservatives right before the Seimas elections.

"In consideration of the Seimas majority systematically seeking to restrict the public and opposition's civil rights, abuse administrative resources granted by government, pressure the news media and independent institutions and also in order to obtain the opportunity to more effectively prevent ever more frequent initiatives that are harmful to democracy," the opposition groups explained the basis of the agreement.

The opposition groups agreed to appoint Viktorija Čmilytė-Nielsen as opposition leader, rotating the office based on Seimas group size proportionality. The opposition groups will work, present legislative and other legal acts, will vote and offer alternative political ideas independently based on their own party programmes and values.

The rotation will go as follows: the first regular parliamentary session (from the signing of the agreement to September 10, 2019), the office of opposition leader will go to the LRLS Seimas group prefect, for the second regular session (September 10, 2019 – March 10, 2020), for the third and fourth (March 10, 2020 to the end of the Seimas term) – the TS-LKD group prefect.

After the municipal elections, Vitalijus Gailius will depart Seimas following his election as Joniškis mayor. Another liberal MP – Arūnas Gelūnas – will also withdraw, having won the competition to become the head of the Lithuanian Art Museum.

A riddle awaits Karbauskis prior to the Seimas elections

Based on the ruling parties’ results in the municipal elections, we can predict their potential...