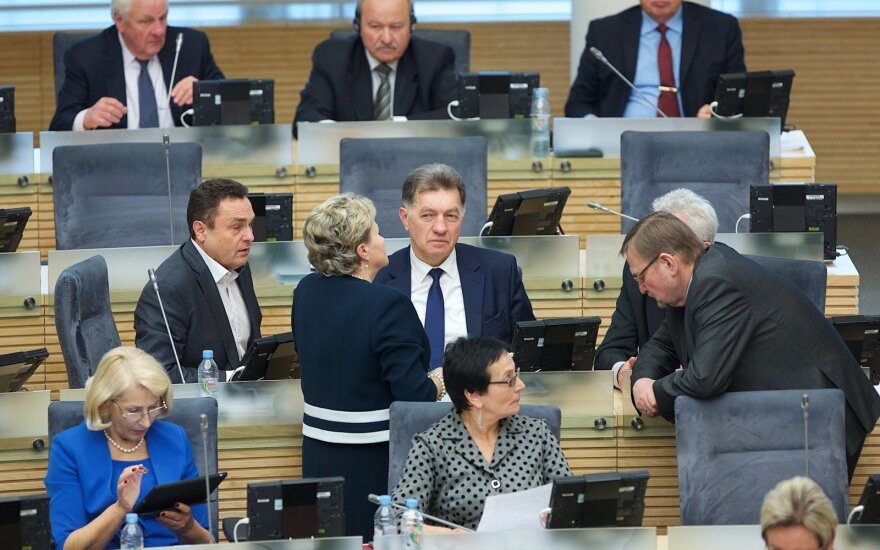 The main focus of the Polish electoral action’s statement was its opposition to the new Labour Code and its liberalisation of labour relations, accusing other parties who are in favour of the project as pandering to large businesses. The representative for the LLRA-KŠP Zbignev Jedinskij outlined a three point scheme that the party wants to focus on – creating good business conditions allowing for profits and contribution to the state budget, the necessity to correctly collect tax and the importance of redistributing tax income and corruption prevention.

The leader of the Lithuanian Freedom Union Artūras Zuokas highlighted the heating infrastructure of the country as an important factor in the country’s economy, speaking for the reduction of gas powered heating and instead the implementation of renewables with a vision of each building being capable of providing its own heating in the future. He spoke of the necessity for Lithuania to catch up to the other two Baltic States in economic indicators, stating a goal of an average wage of €1450, minimal wage of €450 and variable tax rates, with reduced VAT on various groups of products such as healthy food, family related goods or public transport.

The Order and Justice party representative Remigijus Žemaitis highlighted the need to raise domestic consumption and rejected suggestions of rapidly raising the minimal working wage, stating that such a raise would not prove to be a “panacea”. He spoke on the need to reform the Lithuanian tax system with failures in regard to the lowest earners paying relatively more taxes and the failure to collect tax or pay it. According to Žemaitis many businesses simply do not pay taxes, particularly in the small business sector, in no small part because of the problematic bureaucracy surrounding taxation. The politician also spoke for VAT exemptions, rather than a flat decrease in VAT for everything.

Linas Balsys, the head of the Lithuanian Green Party was highly critical of many of his colleagues, particularly those issuing promises of rising wages or gifted apartments. According to the politician some of the promises are utopic and laughable, not the sort of thing the “Greens” plan to do. Similarly to the Order and Justice representative he focused on the need to improve the quality of the tax system as well as the collection of taxes, also noting the need for VAT exemptions or differentiation rather than only a flat decrease. Another key factor in Balsys’ statement was income inequality, both gender based and overall.

The most spirited speaker of the evening proved to be Stanislovas Buškevičius of the coalition “Against corruption and poverty”, who already at the beginning of his statement got into an argument with the debate moderator Edmundas Jakilaitis. Buškevičius expressed resentment regarding the low pace of wage increases in Lithuania as compared to its Baltic neighbours. He recommended state ownership for companies providing basic services such as gas, heating and electricity, not passing up the opportunity to criticize Artūras Zuokas, who as the former mayor of Vilnius was seen to have mishandled the management of the municipality’s heating arrangements. Buškevičius also expressed a need to tax particularly big property, but not in terms of physical entities, but operations such as supermarket chains or banks.

The conservative leader is too young and inexperienced to be aiming for the prime ministerial post,...