Media Briefing
aA
That the Lithuanian Farmers and Greens Union is backed by the shareholders of various companies is a circumvention of the law, which not only the Central Electoral Commission (VRK) should take interest in, but also security institutions, Homeland Union – Lithuanian Christian Democrats Seimas group member Gintarė Skaistė told LRT Radio, lrt.lt writes. Nevertheless, Prime Minister Saulius Skvernelis sees no issue: “We live in a country under the rule of law. None of the companies have been sentenced or have been compromised. The party itself will decide, what donations to accept or not accept, whether you want it or not.” 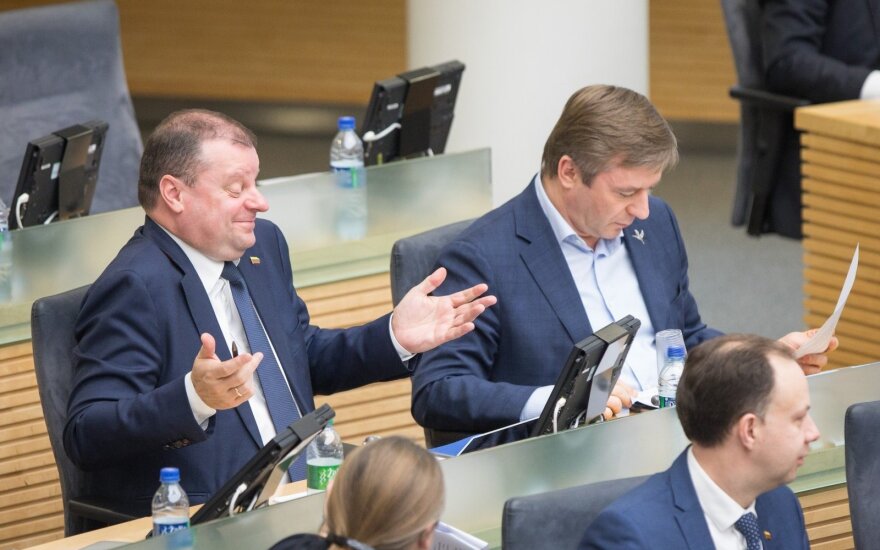 According to an LRT investigation, the ruling party is receiving the maximum permitted donations for municipal elections by physical individuals, some of whom are linked to Belarussian fertiliser loading and transport companies. This fertiliser is also imported to Lithuania by the "Farmer" leader's business.

Commenting on this information, S. Skvernelis states that legal entities have no right to support parties, but private individuals can choose to support any political power. According to the head of cabinet, the party makes the final decision on whether to accept the donations.

In the end, S. Skvernelis was unwilling to comment on the party's actions: "I am not a member of the "Farmer" party. Let the party decide. [...] If the company's shareholders are donating to the "Farmer" party or candidate, then it's bad, but if they donate to other parties, then it's ok? The law allows physical individuals to donate and they can choose, who to donate to and how much."

Lietuvos Rytas journalist Vytautas Bruveris is convinced that there was no other opinion the prime minister could have expressed because he himself is linked to the political party: "It is difficult to expect any other evaluation from the prime minister's side. He cannot comment more strictly or point out problems simply because he belongs to the same crowd even if he emphasises that formally he is not a party member. Formally, the prime minister is right. Now laws were broken. No one was sentenced by the courts."

V. Bruveris stresses that while formally everything is fine, it is clear that this is a manipulation of the law. According to the analyst, when company shareholders donate to parties, the law is cleanly circumvented and this is likely done by not only "Farmer" backers.

"I believe that it is a widespread practice among the other political powers as well. In this case, the fact that the "Farmers" are backed by businessmen related to R. Karbauskis' business, his partners, who have a clear Belarussian fertiliser line, that's also natural in a sense. We have seen and heard a number of times that this oligarch (I mean R. Karbauskis) involves the staff and shareholders of his companies in political activity," V. Bruveris says.

Commenting on the situation, Liberal Movement chairman Eugenijus Gentvilas states that it has become usual for R. Karbauskis to assure he was not familiar with people related to him: "All we need now is for him to begin claiming he is not familiar with the "Farmer" electoral roll leader in Klaipėda. [...] The LRT investigation mentioned backers, Vidmantas Dambrauskas and Arūnas Tūma, who are part of the "Farmer" roll in the Klaipėda municipal elections and for the mayoral race, they hired the leader of the electoral roll, the director general of the state enterprise Klaipėda Port Directorate, Arvydas Vaitkus. When you check, you find that he has not contributed any personal funds. So, you see, the Belarussian fertiliser business representatives are comprising and financing the list, hiring the head of a state company."

Homeland Union – Lithuanian Christian Democrats Seimas group member G. Skaistė also states that the "Farmer" leader's claim that he is not familiar with the specified individuals is rather peculiar. Same as S. Skvernelis, she notes that every party has the right to decide whether to accept donations or reject them.

"Seeing such large sums, it is certainly worth looking to the people donating. When the LRT performed the investigation, it is very easy to trace, who those people are and why they are making these donations. It also looks quite peculiar, as mister Gentvilas pointed out that in principle, the electoral roll is headed by the chief of Klaipėda port A. Vaitkus. All the individuals donating large sums are directly linked with companies in his sphere of influence," G. Skaistė highlights.

She asserts that in such a case, it would appear that there are efforts to trade in influence – a person, who wishes to gather funds for his campaign, urges or even pressures companies under his influence and their leaders to donate maximum sums to his party.

"It looks quite odd and cynical, but looking at it in terms of the law, perhaps it is simply a legal circumvention of the law. [...] I believe that the first reaction should be not only from the Central Electoral Commission, which should prevent such things and [...] perform independent investigations, propose legislative amendments. I believe there should also be a response from the State Security Department because Klaipėda port isn't just any company, but a strategic company of importance to national security, thus what is happening in it should matter to not only regular individuals, but also institutions related to national security," G. Skaistė said.

V. Bruveris also states that this situation should firstly be handled by state institutions and special services: "Relevant services should firstly do their work here and they should uncover or present information, answer questions on whether there is something criminal and illegal here, if there is sale of influence or if they have some operational or other information on this matter. If not, then little can be done."

With a third more civic electoral committees aiming to participate in the municipal elections than...