Ludo Segers | the Lithuania Tribune
aA
During its second day, the Vilnius Democracy Forum moved into high gear with two panel discussions that saw expert insight into various threats to democracy. As autocratic regimes figure high on the list of threats to democracy, Putin's Russia, China and even North Korea were never far from the discussion. 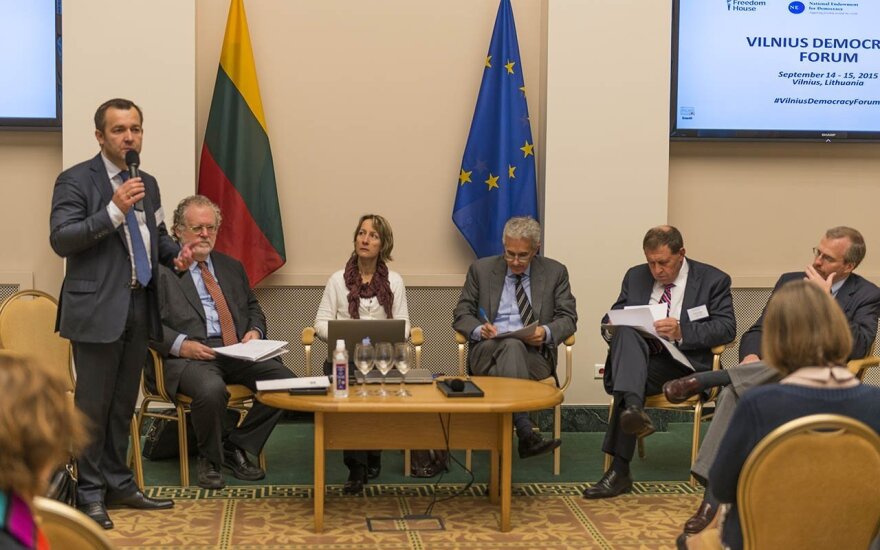 Ramūnas Vilpišauskas of Vilnius University started off proceedings with a panel that included David Kramer, formerly of Freedom House and now at the McCain Institute. Mr. Kramer pitched the ideas of democracy against autocracy and urged the West to make it clear why democracy is the better option. 'Why else would refugees flee to the EU and other democracies and not to Russia?' he asked the audience. He also urged the West to clean up its act in dealing with corruption, an export of Putin's Russia that has seeped into such international organisations as FIFA and the IOC. He suspects that the investigation into FIFA is a scary situation for Moscow. He also wants the rest of the global community to see Russia live up to WTO standards, including hard action to enforce international court settlements. More specifically he suggested the West to go after Russian state property abroad, including the facilities of RT, to ensure the Yukos arbitration (50 billion dollars) is executed. He praised the US for taking the lead with the Magnitsky Act that includes naming and shaming those that are involved in human rights abuse and that have seen sanctions levelled against them. But he said that larger economies in Europe should lead in ensuring similar legislation in their countries. Finally, he called the financing by Russia of extreme right-wing parties that have as their goal to dismantle democracy, such as Marie LePen's Front National in France, shameful. He added: 'It is a real source of embarrassment and designed to undermine the system.'

Andreii Illaniorov, a former close advisor to Putin, turned his attention to the dis- information war and blackmail by Russia's leader. He said: 'Putin has a goal to design new borders, a new order and to weaken border states.' He suggested that the West inform Russians about the kleptocracy and take steps, similar to those taken by Lithuania, which he praised for having turned itself from 100-percent gas dependency to complete independence.

Jeffrey Gedmin of Georgetown University in Washington DC deplored that the West has failed to connect the dots between the multiple fronts where Russia wages war and actions. 'To understand Russia requires understanding the KGB mindset,' according to Jeffrey Gedmin. He added: 'That mindset includes deception, manipulation of the minds which they have elevated to an art and science'. He predicts that the Minsk Agreement will fail, as it lacks a forced settlement. In dealing with propaganda, he suspects that Putin is not in the least worried about an effective response from the West. He said: 'Facts are not important in Putin's Russia, except to support the narrative' and that narrative according the Mr Gedmin is 'to describe the US as hypocritical and decadent and that democracy and capitalism are decaying.' Jeffrey Gedmin suggests that the West must inform, at least Russian opposition, of the effects of kleptocracy, looting and the self-serving nature of Putin's regime. He predicts that Russia will be an empty shell after all the looting comes to an end. He lamented the limited funds to operate effective alternative information. He points out that TV is expensive, but that a budget that allows for 30-minute broadcasting daily, will simply not do.

Professor Walter Russel Mead spoke about the New World Order in which China and Russia act as revisionists, all be it with different agenda's. One likes high oil prices, the other wants cheap resources. Russia has its eyes on the EU, China on Japan and Iran on the Middle East. In Syria, he sees Iranian and Russian interests coming together, although Putin has for the first time moved rather far from its home base. He said 'President Obama follows a populace in the US that is tired of war and terrorism, particularly overseas'. Meanwhile, Russia sees the EU has vulnerable and he worried that the EU may have overextended itself, particularly with a monetary union. In one of the more colourful metaphors of the day, he described Putin as a baboon that loots whilst the tourists visiting Cape of Good Hope have their attention on pleasant sceneries elsewhere.

During an exchange with the audience the failure for the West to respond to Putin's actions was brought up as it allows Putin to set the agenda, but the experts do not see Putin to launch an attack in the immediate future. However, they urged to make it very expensive for Putin, the low oil prices are an important element in that battle. Andreii Illarionov described Putin as not being stupid, but devoid of emotions and very rational. He makes himself useful to like-minded politicians such as Italy's Berlusconi and Germany's Schroeder, as well as the Czech President. Mr Illarionov described Putin as being in some sense a European and sees Russian like a nice island in Europe called Sicily. He said: 'It is not socialism, it is Sicilialism', referring to the Mafia culture that reigns in that part of Southern Europe. David Kramer worried about the infiltration by Putin into some influential Washington think-tanks but praised Congress for bi-partisan support, particularly in enacting the Magnitsky law.

The mid-day session was chaired by the animated Ambassador Žygimantis Pavilions and delivered more insights. The former Lithuanian ambassador to the US and the panel then set out to come up with ideas and find answers to move the Forum forward and bring ideas to strengthen democracy with concrete action.

MP Benediktas Juodka, speaking in Lithuanian, wondered what was withholding the US from delivering LNG to disarm Putin. He was pleased with the pledge of Speaker John Boehner to contribute to energy security.

Maria Leisnner of the Community of Democracies sees RT as harmful to civic society. She described also the dangers of 'revolving kleptocracies', with every four years a new batch of looters getting into the fray. She asked for a global campaign to explain the benefits of Rule-of-Law and links to democratic principles.

Jason Donovan, from the US State Department also stated that democracy and security thrive in the presence of each other and that President Obama has urged diplomatic representations around the world to stand with and support civic society.

Laura Jewett showed the audience extensive support in the Eastern Neighbourhood for democracy. She also pointed out that Putin has not gotten the support he expected to get in redrawing borders and his aggression inside Eastern Ukraine.

The National Endowment for Democracy's Christopher Walker spoke about dramatic changes in the global arena and what it represents in challenges for transatlantic democracies. The West was lulled into the believe that the post collapse of the Soviet Union would be an upmarch for democracy, accelerated by the arrival of the Internet. He urged the democratic communities to confront resurgent authoritarian regimes, and in particular the massive investments by China, Iran and Russia into media. Mr. Walker said, 'Using 'soft power' and TV, their main message is to undermine democracy'. He pointed out that TV still makes up 90 percent of information supply in Russia. He suggested the West to pull its resources together. Meanwhile Russia is taken actions against NGOs by blacklisting them. He urged North America and in Europe to combine efforts with a values-based approach including 'educating' decision makers about the nature of modern propaganda, and providing resources to provide democratically-oriented news and information that make effective arguments about democracy and democratic ideas.

Stephen Nix, the regional director for Eurasia at the Republican Institute stated the great strategic importance for the United States to see democratic flourish in Europe and Eurasia. He said, 'The dangerous actions by Russia and Vladimir Putin pose the greatest challenge to security and democracy since WWII'. He worried about, even in absence of a return to the Cold War, that there is a a clear competition of ideologies and to the idea for free elections, accountable governance, and rule of law versus authoritarian ideals of what he called “managed democracy.” He sees Putin still working on expanding his sphere of influence. Mr Nix said, 'containing that and the West's response is going to define the second half of the 21st century'. He sees the EU has having to play a much larger role in absence of a US that has so many complex issues to address in the global arena. In the new partnership countries he urged the EU with help of the US to support the new democratic elected governments in their task to reduce corruption, improve the rule of law, and represent the real interests of their constituents. Stephe Nix worries that Ukraine has been falling out of the news picture and is fallen into a permanent “frozen conflict”, preventing Ukrainian's EU accession. Only membership in the EU will assure that democratic values will prevail.

The Forum finished with The Vilnius Declaration reaffirming and reinvigorating the transatlantic commitment to democracy and in particular freedom, human rights, rule-of-law, the sovereignty and inviolability of international borders. All of these being violated, challenged and stifled by states, such as Putin's Russia bordering on the EU.

Professor Vytautas Landsbergis intervened towards the end of the Forum requesting that there also would be a mentioning honouring those, particularly in Lithuania, that fought hard to ensure that the countries were able to transit safely and with minimal human loss from the ugliest of autocratic systems into flourishing democracies. Professor Landsbergis and those gathered expressed their worries, particularly with respect to the situation in Russia.

Professor Landsbergis, with agreement of all, wanted, particularly, to honour the memory of the late Yuri Afanasiev, Boris Nemtsov, Anna Politkovskaya, and the many advocating values that will live on long beyond the passing of their championing the cause for democracy.

Russian public and opposition figures who took part in the Free Russia Forum in Vilnius said that...