BNS
aA
A demo military operation was performed in the Gaižiūnai training ground, central Lithuania, on Thursday in the framework of NATO's Saber Strike 2015 exercise, observed by Lithuania's president and generals of NATO countries. 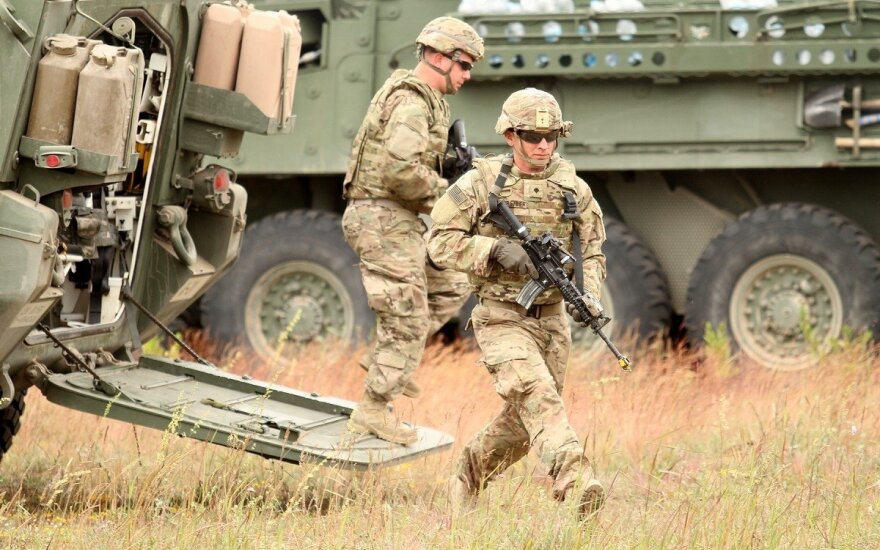 "It is a very important exercise – development of the implementation of the Wales agreement, we see that the NATO partners are meeting their commitments, we are also (meeting) our commitments, we are boosting our defence capacities and our abilities, qualifications and possibilities to cooperate with and work with armies of our partners. The interaction is successful, we have been equal partners for years and I can only applaud that Lithuania is becoming a serious partner rather than a stretched out hand amid the accelerating quality of our armament, emergence of new equipment and new weapons," Lithuania's President Dalia Grybauskaitė told journalists in Gaižiūnai.

During the event, the guests were introduced to the military equipment and weaponry used by Lithuanian and Allied troops in the exercise, as well as the results of the training.

The visitors were invited to observe a spectacular dynamic display of a combined operation involving the US Abrams battle tanks, the Stryker, the Boxer, the Pandur armoured personnel carriers and the Wiesel armoured weapons carriers, of the allied forces, and other equipment. The combined operation will also feature the US B-52 strategic bomber and US close air support A10-C Thunderbolt II aircraft.

During the exercise, NATO Allies had to take over enemy positions. The military equipment involved in the military operation had to pass a mine field, neutralizing the obstacle by powerful explosions.

The Abrams tanks and armoured vehicles moved towards the fortifications, followed by deployment of troops who attacked the enemy. The territory was taken over after a brief fight.

"We saw during the display how efficient infantry of our country and other countries can operate, the coordination and joint staff performance procedures – the benefit is huge," Lithuania's Chief of Defence Major General Jonas Vytautas Žukas told journalists.