Russia's population drain of the century

Mindaugas Jackevičius
aA
A week ago, President of Russia Vladimir Putin took on the issue of emigration in Lithuania, wildly exaggerating the drain it has had on the country's population. What he chose to ignore was that the problem is even more pronounced in his own country: people are fleeing Russia in higher numbers than ever before. Lithuania is one of the destination of their choice. 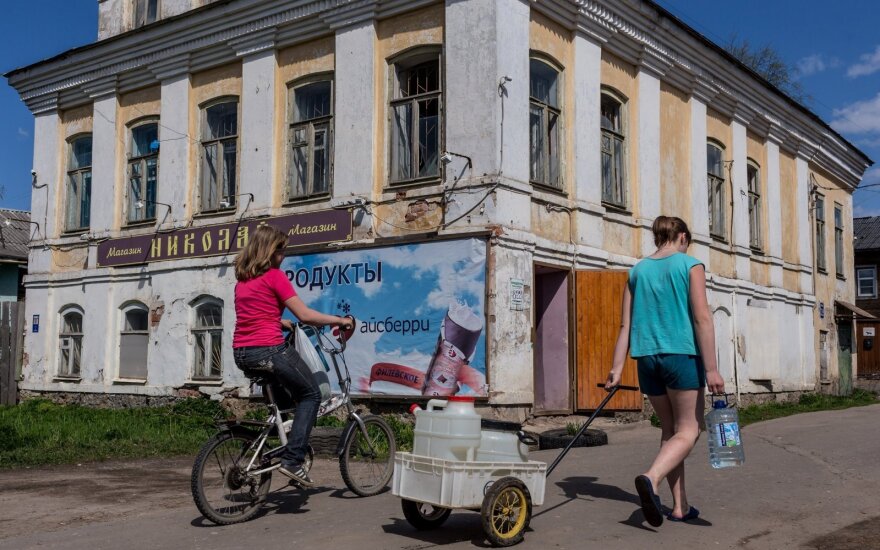 During a youth meeting in Kaliningrad, Vladimir Putin told people at the rally they should not rejoice over difficulties of other countries, such as emigration out of Lithuania. “Soon, there won’t be anyone left to come (to Kaliningrad Oblast). How many people were there [in Lithuania] in Soviet times?” Mr. Putin asked.

The Governor of Kaliningrad Oblast, Nikolay Tsukanov, volunteered with the answer. According to him, previously Lithuania had a population of 3.5 million, whereas now the number dropped to 1.4 million. Mr. Tsukanov was was wildly off the mark - in fact, the population of Lithuania currently stands at about three million.

It appears that emigration is a bigger issue in Russian than it is in Lithuania.

As reported by the news agency Bloomberg, the first eight months of 2014 saw 203,659 people leave the Russian Federation. The outflow is said to be bigger than ever since the start of the 21st century.

Highly-qualified foreign professionals are also leaving the country. According to information gathered from the Federal Migration Service of Russia, almost 250,000 Germans have left the country in the last quarter. That’s a third of all German nationals who work in Russia. Another statistic is that from January 2014, suggesting that approximately 40 percent of nationals (who had recently started working in Russia) of the United States, Great Britain and Spain have left.

The population of Russia, according to some sources, grew by 178,000 in 2014. The reason for this is simple: after the annexation of Crimea, 2.3 million people were added to the country's population.

The Federal Migration Service reported in its website, gks.ru, that in 2014, the population of Russia stood at 143.7 million. In comparison, in 1993 there were 148.6 million people in the country.

A rush to Lithuania

In fact, more and more Russians choose to live in Lithuania. In 2010, there were 605 residency applications from Russian nationals. The Migration Department of Lithuania reports that the number of requests grew significantly in 2014, to 2,644.

In 2010, there were 1,601 requests from Russian nationals to renew residency residency permit, while last year, the number grew to 2,923. The first three months of this year saw 2,026 such requests.

The number of people granted residency permits has also grew markedly over the recent years. Last year, Lithuania gave out 2,770 permits to people from Russia who applied for temporary residency. Another 2,930 people have extended their permits. In the first half of this year, 2,082 citizens of Russia have had their permits extended.

While Russians seem to be eager to move to Lithuania, there is no reciprocal movement of Lithuanians to Russia. Last year, according to the daily newspaper Lietuvos Žinios, President Putin’s repatriation programme, launched in 2006 and aimed at bringing Russian-speakers to their historic home, was a fiasco. In eight years, only 90 people from Lithuania used the opportunity to move to Russia.

Run on the middle class

Both Russian and Western media have spotted and reported on the trend of emigration from Russia. Radio Svoboda recently said that people are leaving the country in greater numbers than ever before over the last 15 years.

Reuter, quoting official government figures, came to the same conclusion. According to the news agency, Russia is facing serious issues of emigration and loss of skilled labour. During the third term of Vladimir Putin as president, Reuters notes, emigration grew five times compared to 2000.

Some experts doubt the accuracy of official Russian government statistics and assume the actual figures are even bigger.

Russians are leaving the country because of political and economic reasons, according to emigration consultants Sergey Kuznetsov and Yakaterina Kadieva, authors of the Facebook project "Чемодан. Вокзал. Куда?" (Suitcase. Station. Where to?)

Ukrainian website Gordonua.com reports that, in 2014, almost 300,000 people left the Russian Federation. That is almost twice more than in 2013.

“Some people claim the leave Russia for political reasons, the popular argument is that 'It is hard to breathe in Russia, it's getting scary'. Others speak of economic factors, noting that business is dying, which is especially true for businesses that deal with imports to Russia. Almost everyone thinks there aren’t any future for the social model, they are concerned about education of their children, uncertain whether they will get adequate healthcare in their old age. These reasons are intertwined, depending on how people perceive their interdependence,” Mr. Kuznetsov notes.

Most of the emigrants are people from the middle, according to the emigration consultant.

“Basically, the people who leave Russia are the ones with whom you'd gladly be friends under normal circumstances. Pleasant, educated, open and active people are the ones who leave. The good old middle class, people who believe in straightforward, European and even, I dare say, universal human virtues. I wouldn’t say that these people are intimidated, they’re just unhappy with what’s going on here,” Ms. Kadieva adds.

The emigration consultants note that only a small fraction of people leave the country "in the 1970s Soviet format - that is, for good".