Arnas Mazėtis
aA
How is Russia going to interfere in Lithuania’s upcoming presidential and municipal elections? How will Lithuania overcome the growing threat to national security? What is Russia’s role in the context of this growing threat? 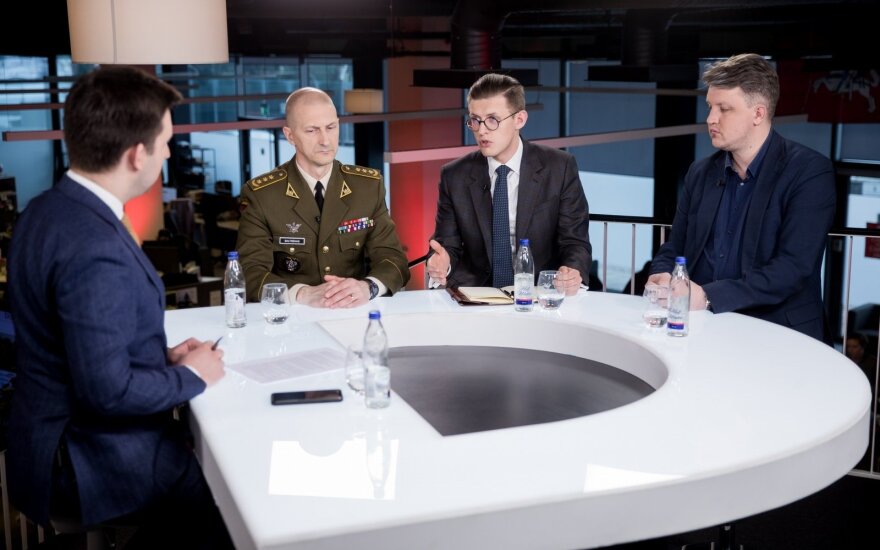 DELFI correspondent on Defense Issues Vaidas Saldžiūnas discussed this in the studio with Colonel Remigijus Baltrėnas, the Head of the Second Department of Operational Services that presented an assessment of the threats to national security, and Arnoldas Pikžirnis, the Prime Minister's Adviser on National Security.

Col. Baltrėnas believes that there are lots of ways in which Russia can interfere in the upcoming elections however experience in other European countries shows that it's not very successful.

Related articles
Identifying the biggest threats to the country, wanting to both punish and be friends
Military intelligence head does not reveal, what he presented to the PM: have a calm Christmas

"First of all one needs to make a distinction between two areas: conventional and military capabilities, and non-conventional actions. I'll start with the military. Military capabilities, especially in the Kaliningrad area, are intensifying full on. They're intensifying in comparison with 2017 and even more so this year. These capabilities have a tendency to grow and both financial and human resources are allocated to them. On the other hand, there are as you mentioned non-conventional means such as operations of influence, cyber spying and recruitment. In actual fact I haven't seen much of a change in this regard, especially regarding cyber spying. Russia has cyber spying capabilities and, when appropriate, they are specifically directed. (...). Which one is more threatening is a matter of probability. This year we know that the military threats exists and is growing. Its use depends on the context as a whole. This year the assessment is that military capabilities and the use thereof in Lithuania is highly unlikely solely because of actions taken by NATO to strengthen defence capabilities" said Col. Baltrėnas.

In the meantime, according to the adviser to the Prime Minister on Matters of National Security, we are getting all the necessary information that helps us to prevent any provocation.

"We need to speak first of all not so much about which areas are the most impacted but rather about the ones at which attempts to influence are being made. There are of course constant attempts being made such as by using money to influence public opinion or to have an influence in strategic facilities.

DELFI analyst Vaidas Saldžiūnas believes that Russia is trying to exert influence in the capital cities of large countries.

"The report mentions not only Brussels but other capital cities of large countries. We see that some of these actions in Lithuania have failed. Various investigations have shown that the attacks do not change the Lithuanian leadership's strategy. But attempts to exert influence through organisations and the EU, let's say in order to mitigate sanctions is something Russia has tried to do in different ways by trying to persuade large countries not to adopt such hardline positions.(...) All attempts therefore when given over Brussels, Berlin or Paris can have various interests which could overlap with Russia's. It's then that we could end up in a difficult situation because the signs aren't there at the moment bearing in mind that we have allies not only in Europe" says Vaidas Saldziunas.

According to Col. Baltrėnas, all means are being applied in order to prevent any kind of provocation.

"Actual intervention should be assessed objectively. Firstly, what means can Russia use to exert influence - In recent years there's very often been talk about cyber spying or its impact. No intelligence agency can tell 100 percent if it can. Today however the maximum cyber security measures are applied. Bearing in mind both on the Central Election Committee website as well as electronic security however it must not be forgotten that Russia's propaganda machine is making great strides with huge amounts of money being invested in it. It's something that's testing our democracy" says the colonel.

"Essentially, cooperation between institutions began rather early. In this regard we speak frequently with the actual Facebook administration which in this case is helpful when it comes to identifying any danger signals we receive. It's all to do with specific issues raised in the US Congress and European Parliament where Facebook representatives must answer unpleasant questions. As far as cyber web page security is concerned, it must be ensured that a person's opinion is not controlled.

At this point we're really expressing our gratitude to the Ministry of National Defense for its assistance. Of course, at this time people's observations are most needed as is their reaction to certain provocation. In actual fact, if we were to take a look at the general trend in Europe, Russia isn't all that innovative bearing in mind the ways it chooses to intervene in the electoral process, always using the same methods.

In his opinion, these days one must also not forget the huge influence of social media.

"One needs to understand the extent to which social media can influence the election as a whole and that cooperation between institutions that receive specific information is crucial. The same with allotting funds during advertising campaigns. We've had cases where in other countries funds were allocated to counter campaigns. It's things like these that need to be very closely monitored and addressed" said Mr. Pikžirnis

"It's probably positive news that up to now none of the methods have worked which means that our democratic system is functioning the way it should and that the relevant councils are working the way they should. In this respect Russia hasn't done anything new. Elections in Eastern Europe have shown that Russia is working in the same old way and still on the same path – it's either aggressive or uses cyber intervention" the colonel told DELFI

Military intelligence head does not reveal, what he presented to the PM: have a calm Christmas

The head of the State Security Department (VSD) Darius Jauniškis and Second Investigation...