BNS
aA
Replacing the government months before general elections would be "irresponsible", Lithuanian President Dalia Grybauskaitė said on Wednesday, after the Social Democratic Party had accused her of attempts to overthrow PM Algirdas Butkevičius' cabinet. 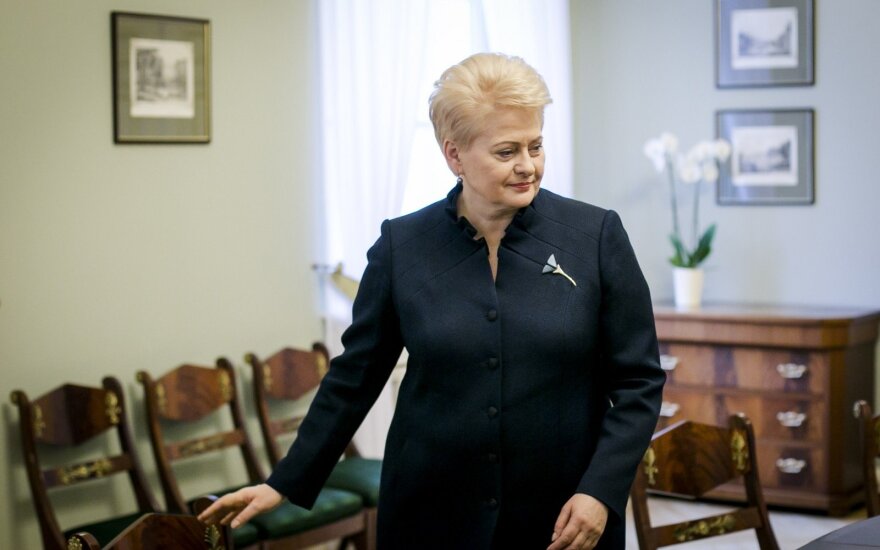 "Just seven months before the elections, government replacement would be an irresponsible move," the president told reporters.

"I strongly believe that this government is capable of completing the term, although it should make appropriate decisions and take political responsibility for the things being discussed in public these days," she added.

Last week, the Social Democratic Party, which heads the government, said that it had "been subject to an obvious and continued pressure from President Dalia Grybauskaitė. Therefore the party is raising the question: does the head of the state want the current government to resign and a new one to be appointed - which would only be a minority government?"

Related articles
Social Democrats ‘left with no option but to fight back against president’
Whose ratings will take a hit after stand-off between president and prime minister?

Grybauskaitė has said that Prime Minister Butkevičius should take a principled stance on the suitability of Environment Minister Kęstutis Trečiokas after investigators published transcripts of his phone conversations with Druskininkai Mayor Ričardas Malinauskas.

In the conversations, Malinauskas is urging Trečiokas to press on with a government resolution on lifting zoning requirements that helped the mayor win a court case about allegedly illegal construction in Druskininkai.

Butkevičius has said he would ask Minister Trečiokas to step down, if he is proven to have lied. Butkevičius is expecting conclusions from his lawyers on the issue on Wednesday

The lawyers are analyzing whether Trečiokas, of the Order and Justice party, lied to the parliamentary Anti-Corruption Commission in his testimony of the circumstances of the approval of the governmental resolution on lifting zoning requirements.

If it turns out that the minister lied, Butkevičius has pledged to ask Trečiokas to resign and, in case of his refusal, to suggest that President Dalia Grybauskaitė remove him. The minister has said he would stay on, insisting he only told the truth to the parliamentary commission.

The Anti-Corruption Commission interviewed him in an inquiry into suspicions that Druskininkai Mayor Ričardas Malinauskas incfuenced the environment minister and other members of the government over cancellation of resort zones. Transcripts of their telephone conversations show that the mayor expected the resolution to benefit the municipality in court proceedings.

After a stream of allegations of misconduct and corruption against the Government, Lithuania’s Prime...

Whose ratings will take a hit after stand-off between president and prime minister?

After a recent stand-off between the Social Democratic Party and Prime Minister Algirdas...

Minister of Environment Kęstutis Trečiokas , a member of the Order and Justice party, denied...

Lithuania’s Prime Minister has claimed that Lithuania’s president has been blackening the...

Lithuania in "medium-sized" political crisis but coalition likely to remain

Lithuania is currently undergoing a “medium-sized” political crisis, according to Lithuanian...

The Social Democrats claimed on Friday that Lithuanian President Dalia Grybauskaitė has been...