Remove indecent monuments of a painful past

(2)
Robert van Voren
aA
In the summer of 2015 Vilnius municipality removed four Soviet statutes on the Green Bridge linking the suburb Šnipiskes with the city center. The statutes represented farmers, students, industrial workers and “defenders of peace”, depicting Soviet soldiers who liberated the city from the Nazis in 1944 and subsequently imposed the second Soviet occupation. The statutes were a prime example of Soviet realism and for Soviet standards quite innocent: there was little heroism to be seen, no images of political leaders like Lenin or Stalin, just examples of four classes of Soviet citizens being part of Soviet life. Yet for Vilnius mayor Remigijus Šimašius they depicted a lie and for that reason should not be retained: "The statues represent a lie. Their heroic portrayal of the Soviet people – that is all a lie ... The statues are a mockery of the real people who had to live during the Soviet period."
Sekite svarbiausias naujienas socialiniuose tinkluose! 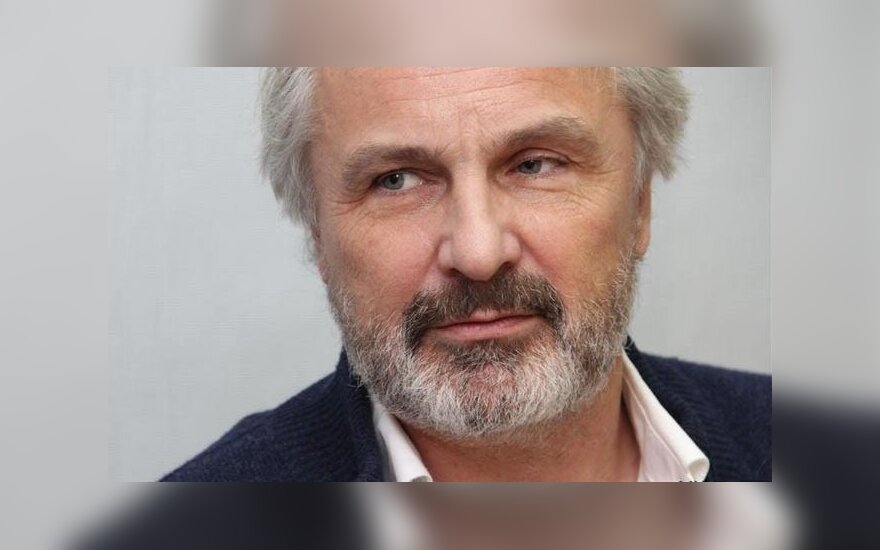 Robert van Voren
Related articles
Vilnius to hold discussion on Kazys Škirpa
For Your Freedom and Ours?

I remember some 6-7 years ago an exhibition of Soviet design was held in one of Vilnius’ museums. My stepson was then a young adolescent, and walked around in a world that had ceased to be and images of which had almost disappeared from every day life. A brand new Moskvich was standing in one of the halls, household tools that were dysfunctional yet in a strange way beautiful, and in one corner a television screen showed a clip of residents receiving their brand new flats in Fabioniškės. People were smiling, dancing, happily receiving their key and entering the flat for the first time. “That is all fake, right?” my son asked, “of course they were not happy, they are acting.”

The fact is that people were happy, very happy even, finally being able to move in a brand new flat, often coming from a noisy crammed kommunalka, and have their own private environment. What is a lie is to pretend that people were not happy. Soviet life was maybe much more grey than life in an open society based on the rule of law, but millions of Lithuanians led happy lives, even if alone because they knew no other.

I do not deny Lithuania was occupied by the Soviets, but the overwhelming majority of Lithuanians became part of the Soviet regime, either in compliance or in collaboration, and the number of Lithuanians who dared to stand up before glasnost and perestroika started is extremely small. As German historian Wolgang Thierse writes, “There are real perpetrators and real victims, guilty ones and innocent ones and then in between the many others, we – who lived there, busy getting by, more or less decent, more or less clever, more or less cowardly or brave.”

Most of the Soviet statutes in Vilnius were removed immediately following the reinstatement of independence, one of the first to go the big ugly Lenin standing on Lukiškės square, a Soviet phallus in front of the KGB headquarters. The statutes were collected and put in Grutas Parkas, so that future generations can go see them, imagining a bit what life was like, and see who the leaders were that held a nation captive and imposed a totalitarian regime. I think it is a good idea: rather than destroy and erase, use these elements of the totalitarian past as educational instruments. They have become a means to help people remember, and hopefully think twice before endangering freedom and democracy again. I was against the removal of the statues on the Green Bridge, because they were much more an element of normal Soviet life, both happy and sad, a past that cannot be undone and should not be erased from Lithuanian history.

What I don’t understand, however, is the fact that while Soviet elements are removed from public life so easily, it seems to be impossible to remove monuments to Lithuanian nationalists who during the difficult years of war became perpetrators and participated in the annihilation of virtually all of Lithuanian Jewry. They are still revered as heroes of Lithuanian independent statehood, defenders of the Lithuanian nation, but in fact they became war criminals when facilitating or participating in the largest mass murder ever on Lithuanian soil. In my view their crime is much more than the killing of innocent men, women and children alone. They erased one of the brightest parts of Lithuanian heritage; they rid the country of countless industrialists, scientists, artists and other members of the intelligentsia, a crime that not only affected Lithuanian Jews but Lithuania as a whole.

One of the factors that made the Holocaust in Lithuania possible was the lack of communication between Lithuanians and Jewish Lithuanians. The communities lived side by side, but Lithuanian Jews were seen as “different” and thus a first step towards their annihilation was set. This separation continued for many decades, kept in place by Soviet rule, yet luckily the younger generations of Lithuanians have started to see Jewish Lithuanian history as part of their own history. And thus to them the disappearance of much of Jewish life from Lithuania becomes what it is: a national loss, a personal loss.

In such a climate, it is impossible to maintain monuments for murderers and collaborators, such as the plaque for Juozas Ambrazevičius at my Vytautas Magnus University in Kaunas and the plaque for Noreika on the Vrublyov library in the capital. For me it is astonishing to imagine that a street remains named after Kazys Škirpa, the leader of the Lietuvos Aktivistų Frontas, whose vehemently anti-Semite statements and propaganda paved the way for the Holocaust. Those wishing to keep that name claim that Škirpa remained in Germany and therefore personally did not take part in the murder of the Jews. Yet they tend to forget that Škirpa stayed in Germany against his own wish, and thus was prevented from direct participation. And mind you, Stalin and Hitler also did not kill anybody personally, does that mean they are not guilty as well?

Lithuania is coming to terms with its past. Finally. It is a painful process, but I see change all around. New Lithuanians grow up who realize what happened, who mourn the dead and that what was lost. In such a country, these wrongful monuments ought to be removed. Justice must be done; there is no other way. In my view, they should be collected in one spot, like the Lenins and Stalins in Grutas park, and be part of a truthful exhibition on what happened during those very dark days and what roles these persons played. They should become a warning that the line between good and evil is a thin one, and that society needs to remain vigilant in order not to let things slip back. And above all, they should be used in a fashion that does honor to those who became their victims, and whose graves forever dot the Lithuanian countryside.

The Vilnius Town Hall is hosting on Tuesday evening a discussion on whether or not to rename a street...

Events marking the International Holocaust Remembrance Day are getting underway in Lithuania on...