Regions of Russia – equal subjects of federation or hostages to centre?

Linas Kojala, Vytautas Keršanskas
aA
Based on its Constitution, Russia is a federation. It is natural, given the state‘s size and regional differences. Furthermore based on social and economic indicators the federal subjects are vastly different – from Chechnya where a bloody war raged and risks of instability remain to Siberia, blessed with rich oil and gas reserves. 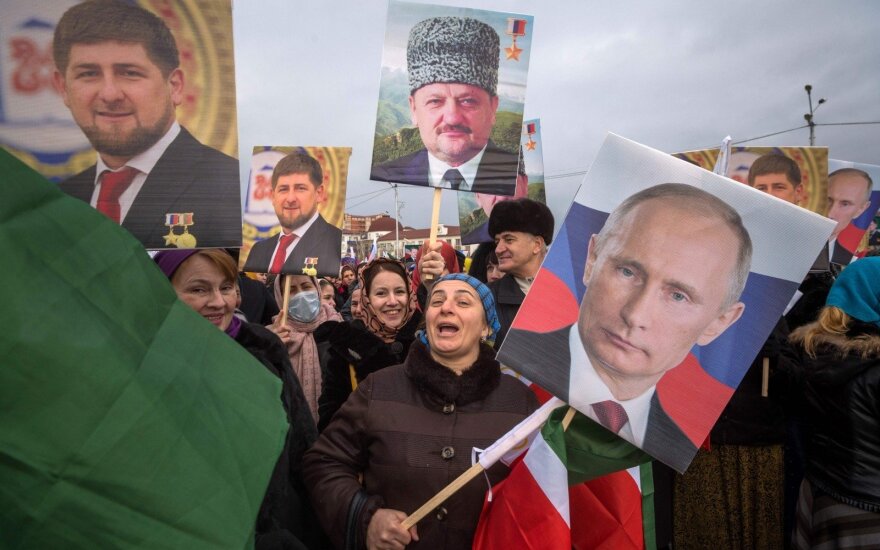 Demonstration of support in Grozny
© AFP/Scanpix

In some regards the differences are absolutely massive. For example based on 2011 GDP per capita data, Sakhalin with 30 thousand euro per capita exceeded Ingushetia twentyfold. Such numbers significantly exceed Western states such as the United States of America or Germany where the gap between the richest and poorest is respectively 5 or 2.5 times. Analogous contrasts appear in unemployment figures, varying from just a few percent in Moscow up to a third in, once again, Ingushetia.

Currently the regions gain a majority of their income from income tax (almost a third), 22% comes from income tax, with another 18% from the federal budget. That said in some cases without input from the federal government some regions would be left at the edge of a precipice, so it is unsurprising that 86% of Ingushetia‘s and 81% of Chechnya‘s budgets are a result of central government assignations. In 2014 the sum of all region budgets reached €135 billion euro, a figure far shy of the federal budget which reached €220 billion. It is clear that the federation dominates in regard to the regions, particularly given that the federal subjects cannot gather their own taxes or change their sizes.

Related articles
Putin’s Russia – can hitting rock bottom destroy the system?
Kojala – we have to remain calm and see NATO as one unit

Thus a federation system in Russia should seemingly mean that the subjects and the regional government which represents them should be strong and independent, subordinate to the central government only insomuch as the Constitution and other key pieces of legislation regulate. What Vladimir Putin has created over his years in power, however, illustrates clearly the term created for the Russian political system – “federation without federalism”.

The development of post-Communist Russian Federation

“On paper” the Russian Federation is comprised of 83 federal subjects, which are separated based on six levels of autonomy. A republic, of which there are 22 in Russia, is the most autonomous subject, each with its own constitution and official language. The borders of republics are based on historical territories of ethnic minorities. Four autonomous districts (Russian – okrug) also are notable for their ethnic background, but they do not have the right to a constitution of their own or an official language. A district (Russian – oblast), a fringe (Russian – krai) or autonomous district are equivalent to an autonomous county, but lack the ethnic element. Finally federal cities form the sixth level, these are large cities that operate as independent regions. Based on the Constitution, these subjects of varying independence should have varied significance in the Russian Federation political subordination.

After the fall of the Soviet Union, the state was led by Boris Yeltsin, who told the leaders of a forming political elite – “Take as much autonomy as you can swallow”. The call was heard, but two factors made for a development of Russian federalism that B. Yeltsin did not have in mind.
A weak central government in Moscow failed to control processes outside its borders, thus the economically or politically strong regions managed to obtain a level of autonomy little different to sovereignty. Secondly we have to take into account the political culture of regional leaders, which stemmed from a Soviet Union heritage. The most independent federation units were the most inclined to authoritarian rule, thus B. Yeltsin’s presidency ended with a risk of total collapse of the Federation. Authoritarian regional leaders such as Murtaza Rakhimov of Bashkiria were only nominally loyal to the Kremlin. Tatarstan even threatened to support Kosovo in 1999 because it was critical of Moscow’s pro-Serbian foreign policy. At the same time it is counted that an entire 20 thousand pieces of legislation duplicated authority between the regions and federal government.
Taking power in the year 2000, Vladimir Putin was keenly aware of this. His main goal in domestic policy was to restore the Kremlin’s power in regard to the federation subjects. This was based on not only the continuing conflict in Chechnya, but also an understanding of the need to neutralise the overly independent regions. He was also seeking to take control of energy resources and use them not for the growth of separate regions, but the entire state.

Federation subject law had to be harmonised with federal law. Notions of “sovereignty” were removed from regional legislation, which had such a status. In May 13, 2000 a presidential decree split all federation subjects into seven federal counties, which were to be governed by special representatives directly subordinate to the president. Thus the central government strengthened its control on power structures in the regions – by having the presidential institution assign regional leadership. The leaders of regions were withdrawn from the upper house of the Russian Federation and thus lost the capacity to participate in the creation of federal legislation.

The federal subjects were also bent to the Kremlin’s rule by enforcing vertical governance through electoral system restrictions. In 2004 the direct election of governors was abolished, instead they would now be assigned by the president. Direct election was returned briefly after the mass protests of 2012, but next year legislation was passed which allows the governing bodies of regions to decide whether they need direct elections or not.

The biggest influence to the federal subject’s independence, however, would be the reform of budgeting and taxation. In 2000-2001 the central budget began receiving more and more funding (for comparison – in 1999 the central budget received 44%, while in 2007 already 66% of the entire state budget), while from 2005 the “most profitable” taxes (such as VAT, excises, mineral excavation taxes) were directed into the control of the central budget. The loss of independence experienced by political and economic leaders in regions was decisive in the great increase of federal government influence in regions.

Such a rise of central government influence on the federal regions was ensured by a form of relations solidified after the year 2000. The regional government, seeking to obtain favourable conditions from the centre, for example in making decisions on developing infrastructural projects, declared absolute loyalty to the centre in return. For example the regional government of the Tatarstan Republic “negotiated” such grandiose projects as the millennial celebration of the Kazan city (360 million USD assignation from the central budget) in 2005 or a Universiade (1 billion USD) in 2013. In the case of regions such as Tatarstan the centralisation of power allows for “purchasing” of local elite loyalty, which helps both assure territorial integrity and brings “correct” results in national elections.

Similarly, with limitations on the regional subjects’ ability to perform external relations, attracting investment to regions becomes possible only through the federal centre. For example due to its geographical position the exclusive Kaliningrad Oblast had the opportunity to become an economic centre in the region or at least develop an exclusive model of trade with the EU (to which Kaliningrad is an enclave), which could have become a pilot project for EU-Russian cooperation.

The entire post-communist Russia period was marked by support from the Kaliningrad political and business elite for various initiatives of opening up to the EU market, but the central government had a different vision for the development of Kaliningrad, both due to a fear that by opening up a subject which is already separated from the rest of Russian territory there could later rise various dilemma over territorial integrity and due to the use of Kaliningrad for the purposes of the centre’s foreign policy. The central government is not operating on a principle of putting the welfare of the people first, but focuses on aspects of national security and territorial integrity, limiting the potential to make Kaliningrad into a field where it would be possible to test the possibilities of cooperating with the EU.

Thus it is unsurprising that today Russia is operating more as a unitary, rather than federal state. This is based on Putin’s reforms, seeking to strengthen the central government vis a vis the regions as well as the fact that the President’s protégés are directly assigned as regional governors and consolidate power. While the election of governors has returned once again, it is doubtful whether this will cause any loyalty issues because various bureaucratic requirements are being raised (to gather signatures from regional representatives and etc.)

Such a trend reflects the entire perspective of Russian development, which is based on consolidating power and limiting the rise of any alternative sources of political influence. Having economic and other leverage, the Kremlin becomes nigh on invulnerable.

The election of the Russian Duma was a paradox. On the one hand, fourteen parties were on the list;...

It‘s a country where the average annual salary has dropped by almost a tenth and is now on not much...