(3)
the Lithuania Tribune
aA
A new documentary by leading Baltic journalists investigates the Russian President Vladimir Putin's master plan for and interference in the Baltic States by following a $100 million money trail that funds Russian-backed proxies in the Baltics. 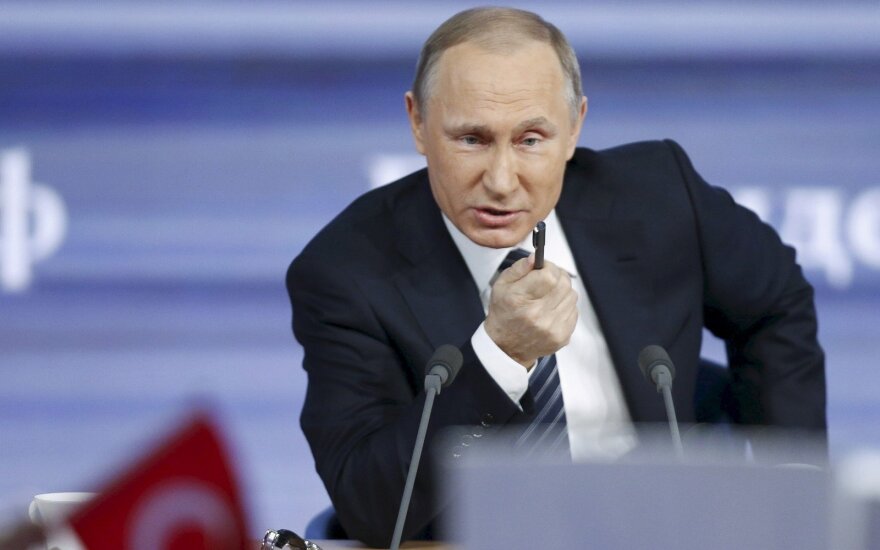 Opening at the end of Russia's 2008 war in Georgia, the film focuses on how the Kremlin has been influencing the local population and politics in the Baltic states, home to some one million Russian-speaking residents.

It shows how the Kremlin funded and otherwise meddled on behalf of local politicians with pro-Putin views to get them elected to important international posts, as with Latvia's Tatjana Zdanoka, who won a position in the European Parliament with Russia's support.

The Master Plan follows the money behind a network of Russia-sponsored NGOs, with offices in more than 100 countries, uncovering a trail revealing at least $100 million provided annually by the Kremlin — an amount the filmmakers suspect is the tip of an iceberg.

The Master Plan trailer from Mistrus Media on Vimeo.

The film shows how some of these NGOs have pushed alternative history books, providing them free to schools throughout Europe. Among other topics, for example, the books cast Russia as having liberated the Baltic States from Germany, rather than occupying them.

The legitimacy of the Baltic States' independence is questioned, and their annexation is justified. Leaders of other NGOs hold forth at various international summits abroad, working to promote Russia's foreign policy interests.

The Master Plan also surveys Russia's relentless propaganda war in the Baltic States. The Russian state media channels are freely accessible in the Baltics and the main news source for 70% of their Russian-speaking communities.

They have gone to great lengths to "create a fog around the truth," as Inga Springe, a Re:Baltica journalist, puts it. Much of the rest of the local population feels they can't trust any version of the information they receive.

Meanwhile, the few Russian journalists who strive to report real news are often fired, and at times forced into exile.

Galina Timchenko, the former editor-in-chief of lenta.ru, previously one of the most popular news sites in Russia, was fired by the Kremlin-linked owner at the lead up to the Crimean takeover.

"They needed to clear the information channels before the Crimean operation," Timchenko says in the film, speaking from the office of her new media outlet, Meduza, based in Latvia.

Journalist Sanita Jemberga came up with the idea for the documentary after Putin annexed the Crimean Peninsula from Ukraine in 2014.

She came across a WikiLeaks cable which mentioned Modest Kolerov, a Russian media "spinmeister". An unknown source in Ukraine sent the cable to foreign leaders in 2006 and spoke of Kolerov's role in "influencing Crimea's information space," and referred to Crimea as Ukraine's "soft underbelly," noting it was a "fertile ground for troublemakers."

Nearly a decade later, that proved to be the case. "You replace the word Crimea with 'the Baltics' and it would read the same," Jemberga told Mother Jones.

A major difference between the Baltic states and Ukraine, of course, is that Latvia, Lithuania, and Estonia, are all members of NATO and the European Union, an affiliation that at least theoretically would give the Kremlin pause.

"It's not like we're afraid that Russia will come in tomorrow," said Springe, "but there is a constant uncertainty."

"It's pretty clear if you invade a country, Article 5 applies," said Jemberga. "But what if you attack the communications? What if you do some kind of flare-up on the border but you actually don't come in? What if you steer the local population, send in some militants who are not dressed in Russian army clothing to flare up this thing? Does NATO intervene?"

"So far," noted Springe, "Putin's actions show that he is a man who takes advantage of opportunities."