Vykintas Pugačiauskas,
www.lrt.lt
aA
Russia has announced it is planning to set up a military aviation base in Belarus, while Minsk refrains from comment, even after a meeting between Belarusian President Alexander Lukashenko and Russia's Vladimir Putin. 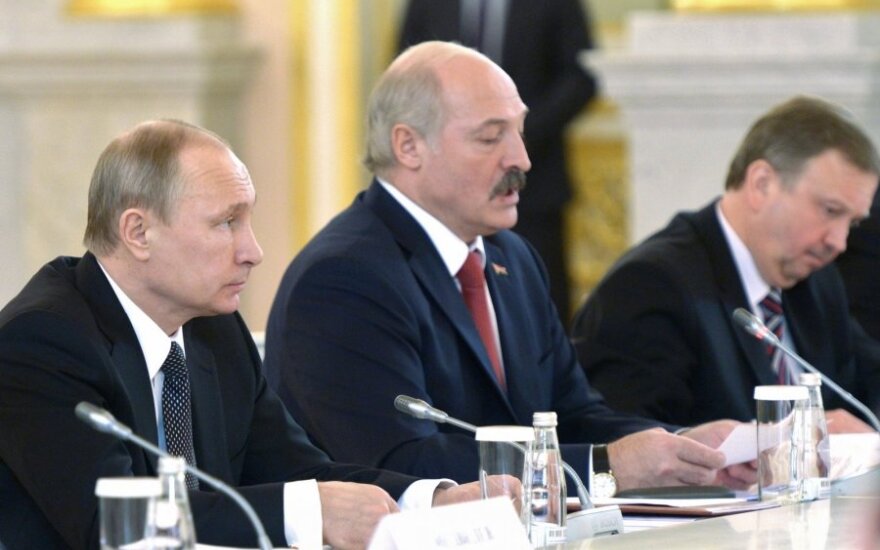 Moscow insists it already has a preliminary agreement with Belarus on deploying Russian fighter jets for decades to come, while observers in Minsk see it as the Kremlin's pressure on Lukashenko at the most inconvenient time, on the eve of an election, limiting his freedom to flirt with the West.

Moscow wants to set up a military base in either the Barbuysk Airfield or Baranovichi, where Belarus has its own air base. President Putin has instructed Russia's defence ministry to finalize an agreement with Minsk which would allow Russia to operate a base for fifteen years and, unless there are objections from either side, automatically extend the agreement for fifteen-year terms. The base would reportedly let Russia defend external borders of an ally state from international terrorists, while decisions to use fighter jets would be made by a joint force commander.

Minsk has yet to make any comments about hosting a Russian military base, although Russia's prime minister mentioned it several weeks ago in Gardin. Last Friday, Lukashenko visited Putin, but neither made any mention of the base.

"I've been president for years. Not ten or fifteen, but already twenty years. Over this time, you should have been reassured of our twists and turns. So there is no need to reproach us for turning away from someone. There's nowhere for us to turn. We have always been with you and will continue for a long time," Belarusian President Lukashenko said.

There have been signs, however, that the Belarusian leader was rather reluctant to accept the base, especially in the run-up to a presidential election. Minsk's dependence on its bellicose big neighbour is a touchy subject.

"I am sure that the election will pass at the highest level, in complete compliance with our own, Belarusian and international standards. I'd like to wish you good luck," said Russian President Putin.

According to experts in Minsk, the Kremlin's move will put the Belarusian leader in a different position and will considerably limit his freedom, especially as Lukashenko has been trying to ingratiate himself with Western powers with gestures like mediating in Ukraine truce talks and releasing some political prisoners.

Minsk has a history of burying Moscow's decision it does not entirely embrace under red tape. But this time, Belarusian analysts say, Lukashenko has been arm-twisted by Moscow, his only ally in efforts to avert economic recession.

The Russian base would transform Belarus's entire geopolitics. The two countries already have a joint defence policy, a common airspace defence system and a navy communication base; Russia has regularly sent its military planes to the country. However, until now, Lukashenko could enjoy all these advantages without irritating Lithuania, Poland and other NATO neighbours too much.

Russia has military bases in Armenia and Kyrgyzstan, but these countries are located in genuinely turbulent regions, while Belarus has never faced any risk of being attacked by its neighbours.

The opposition in Minsk - and probably the government as well - is concerned because of the Crimea precedent, where Russia used its military bases to take over foreign territory. Moscow will also have a leverage to maintain its influence in Belarus even after Lukashenko's departure. Moreover, it is yet another warning for the Western powers not to try to lure Belarus into its camp - as they did with Ukraine.