BNS
aA
Members of the public will be able to watch massive military exercises to be held in Lithuania in June as part of the drills that will take place in civilian areas, the military said on Wednesday. 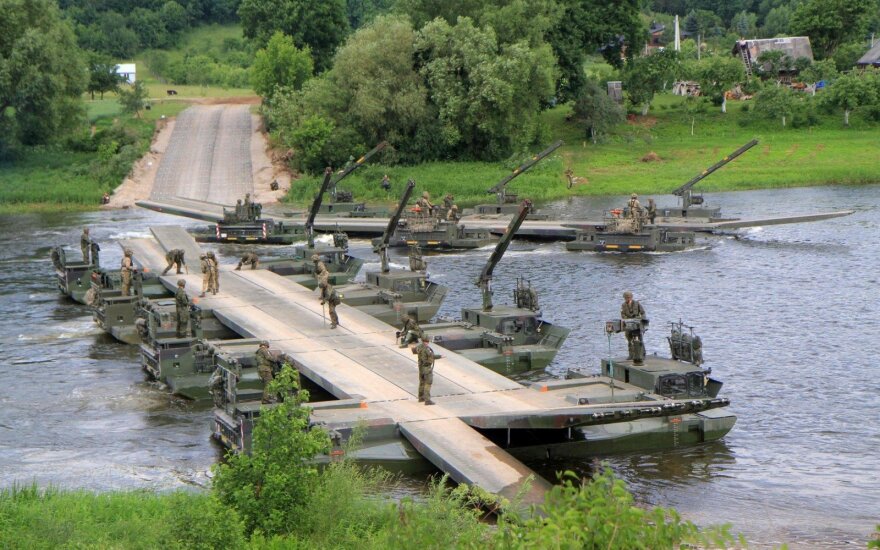 "Although the exercises will be held mainly in firing ranges and military training areas, some episodes will take place in the Alytus county and the regions of Kaunas, Klaipėda and Šiauliai. So, people in Lithuania will certainly be able to watch certain drills," Major General Vitalijus Vaikšnoras, the Chief of the Joint Staff, told reporters.

Thunder Strike 2018 and several smaller national exercises, and the multinational drills Baltops and Saber Strike will take place in Lithuania next month, involving more than 10,000 troops in total.

Thunder Strike 2018 will be the largest national exercise in the history of the Lithuanian Armed Forces, involving more than 8,000 military servicemen and officers of the interior security system, Vaikšnoras said.

"Events will start from a local conflict and will gradually move to a hybrid war scenario. Forces (that are not part of the Armed Forces) in peacetime and the Lithuanian Armed Forces' rapid response units will be activated. The Armed Forces will later response to a wide -scale military conflict," he said.

A mobilization drill for reservists will traditionally held as part of the Thunder Strike exercise.

The military say that different exercises to be held in the country in June will involve up to 13,000 Lithuanian and Allied servicemen and officers, below the threshold for international monitoring.

Several tens of thousands of troops will be training in the Baltic Sea region next month, but the military say that these exercises will be separate and not interconnected.

Several military exercises will take place in the Baltic Sea region in June, with tens of thousand...

An annual exercise Hunter of anti-tank units is starting in the Pabradė training ground, eastern...

A military training is starting in the Jonava and Kaišiadorys districts, central Lithuania, on Monday...