Ludo Segers | the Lithuania Tribune
aA
Lithuanian Prime Minister Algirdas Butkevičius started his visit to the US capital on 6 October with a busy schedule. 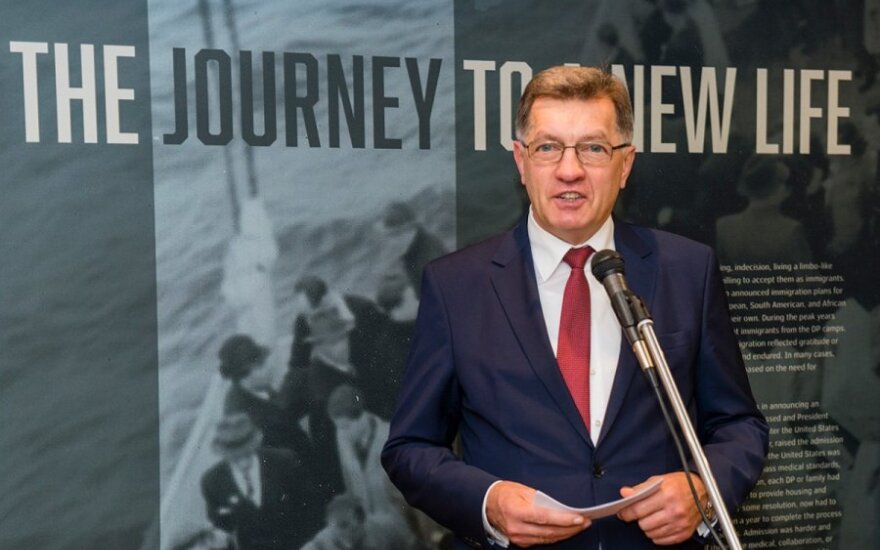 Accompanied by a large delegation, Mr. Butkevičius met on Monday morning with Dr. Jeffrey Alexander at the SRI, the International's Centre for Science, Technology, and Economic Development where they were given presentation on cooperation with Lithuania in innovation of ecosystem development. From there the delegation travelled to the US Holocaust Museum. Arthur Berger, Senior Advisor, met Mr. Butkevičius and after a tour of the museum, the prime minister lit a symbolic candle and signed the book of commemorations.

After the visit to the museum, the prime minister attended a luncheon meeting hosted by the American-Lithuanian Business Council at the Lithuanian Embassy in Washington. Mr. Eric Stewart, president of the American-Lithuanian Business Council, greeted the Lithuanian delegation and praised the country: "The opportunities in Lithuania are abundant, but notably energy, agriculture, IT/health and defence all offer immediate opportunities for U.S. Companies," said Eric Stewart. "Lithuania is a great place for American companies to do business" and "most companies reinvest and hire more Lithuanians after they’ve made their initial investment."

In turn, Prime Minister Butkevičius praised the investments made by US companies. Mr. Butkevičius pointed out that Lithuania had climbed in the global competitiveness ratings and said “Lithuania is now placed 17th in the Global Doing Business ratings and most recently the Lithuanian Parliament has made amendments to the Labour Code to lighten the administrative burden for the employers”. He added that Lithuania would join the eurozone on 1 January and would also become a member of the OECD.

In the afternoon, the prime minister attended a meeting at NASA where associate administrator Robert Lightfoot welcomed the delegation to NASA’s headquarters. After a short briefing about the cooperation between NASA and Lithuanian, Mr. Lightfoot presented Mr. Butkevičius with a Lithuanian flag that recently returned from space. The meeting concluded with the signing of a bilateral cooperation agreement, which included an international internship programme at NASA. The agreement was signed by Mr. Arūnas Karlonas, director of MITA and NASA’s Robert Lightfoot.

Later in the afternoon Mr. Butkevičius met also with Rabbi Andrew Baker of the American Jewish Committee in a private meeting. 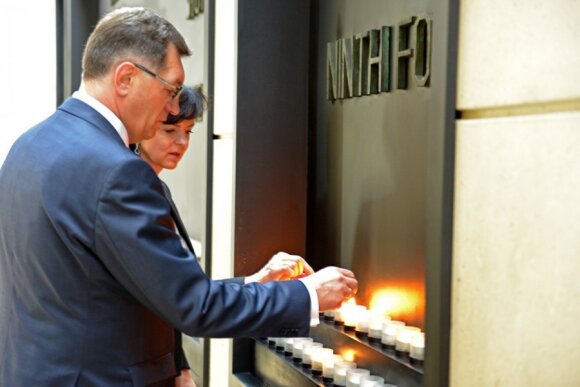 At the end of a very busy day in Washington Prime Minister Butkevičius opened the exhibition "No Home To Go To: The Story of Baltic Displaced Persons" at the Lithuanian Embassy in Washington, DC. The exhibition is dedicated to the history of the Diaspora of Baltic Displaced Persons (DP) during the last years of World War II and the immediate years that followed (1944-52).

In his introduction, the Lithuanian Ambassador to the USA, Žygimantas Pavilionis, said: “The Baltic states did not only receive moral support from countries like the USA that did not recognize the illegal annexation by Soviets, but the Displaced People living abroad, mainly in the USA, provided a huge moral support.“

Ambassador Pavilionis referred to them as “Birds of God“ (Dievo paukšteliai). The prime minster, in turn, remarked: "This exhibition honours all those intellectuals and the cultural elite that escaped Soviet aggression. We can only imagine the struggle in the Displaced People camps; Lithuanians, Latvians, and Estonians that loved their countries but were unable to return, believing that their situation was temporarily.“

Mr. Andris Razans, the Latvian Ambassador, said: “The plight of these DPs often had a personal connection to many in the Baltic countries and that when signs of aggression show up in Europe, as the situation is again today, all this history seems again not far away“. Estonian Ambassador, Mr. Eerik Marmei, praised Lithuania for organising this exhibition. He said: "Many of the 25,000 Estonians that live in the USA today were people that first passed via these Displaced People camps. These people had a close connection to their relatives back home. It is through their efforts and their ideals that the hope for freedom remained alive.” 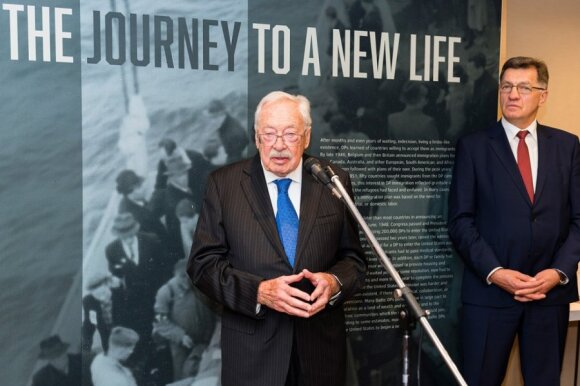 Irena Chambers, the curator of this superb exhibition, explained that although providing a comprehensive insight, such exhibition is also an unfinished project. In 2014, 70 years after the Soviet invasion and aggression, the Displaced Persons maintained an active social life, established schools, and created a Baltic University. These people wrote books, had theatrical gatherings, and their artists were celebrated in exhibitions, whilst cherishing their language, cultural traditions and maintaining their ethnic identity while in exile.

The exhibition is a travel through the history of Lithuanian, Estonian, and Latvian family life. They preserved their history through family and relics: diaries, documents, and photographs.
The honour to open the exhibition was left to Balzekas Museum President, Stanley Balzekas, Jr. This exhibition became possible through the joint effort of Balzekas Museum of Lithuanian Culture in Chicago together with the Vytautas Magnus University and the Lithuanian Emigration Institute, as well as the Lithuanian, Latvian and Estonian community in exile. The exhibition will remain for a while in Washington, DC before travelling in 2014 and 2015 through all the largest cities in the United States and Canada.

The high quality of this exhibition is supported by the Lithuanian Council for Culture, Lithuanian Minister of Foreign Affairs, the State of Illinois Arts Council, Kazickas Fund and Lithuanian Foundation and other foundations and private individuals.

The evening concluded with a reception attended by a large group of American dignitaries, including leading members of the Latvian and Estonian community.

Lithuanian Prime Minister Algirdas Butkevičius and his delegation are visiting the United States...

On 5-14 October, Minister of Foreign Affairs Linas Linkevičius as part of the delegation headed by...