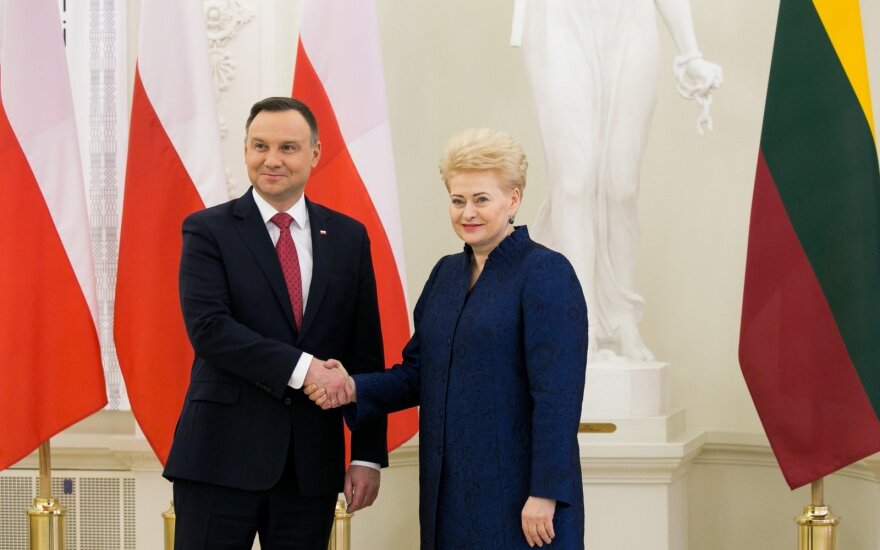 "We are determined to bolster security and stability in Europe and the world, to strengthen our bilateral relations in the fields of defense, economy, energy, transport, and others," they said in a joined statement marking the 227th anniversary of the Constitution of May 3, 1791.

The presidents underlined that "the letter and spirit of the Constitution kept alive the aspirations for freedom, political identity and sovereignty, during the hard times of occupation".

"The aims and ideals of the 3 May Constitution are as relevant today as ever. As we face multi-dimensional regional and global challenges, we are ready to stand up to them with unity and resolve," they said.

May 3 is an important national holiday in Poland. In Lithuania, the date is celebrated more modestly as critics say that the Constitution reduced the independence of the Grand Duchy of Lithuania in the Commonwealth of the Two Nations.

Lithuania-Poland relations have been warming up recently. The two neighboring countries have exchanged top-level visits.

Poland had frozen top-level visits to Lithuania for more than five years, accusing Vilnius of failure to ensure the right of the Polish ethnic minority in Lithuania -- criticism rejected by the Lithuanian government as unfounded.

Lithuania's transport attaché should start working in Poland from June

Lithuania's transport attaché should start working in Poland from June. The Baltic country hopes it...

The leaders of Lithuania, Latvia, Estonia and the European Commission (EC) are meeting in Brussels...

In a congratulatory speech at the Lithuanian parliament for restoration of the country's independence...

Baltic countries speak out against EU sanctions on Poland (3)

The three Baltic prime ministers said in Vilnius on Friday that they were against EU sanctions on...

Amid the recent thaw in relations between Lithuania and Poland , parliamentary speakers of the two...