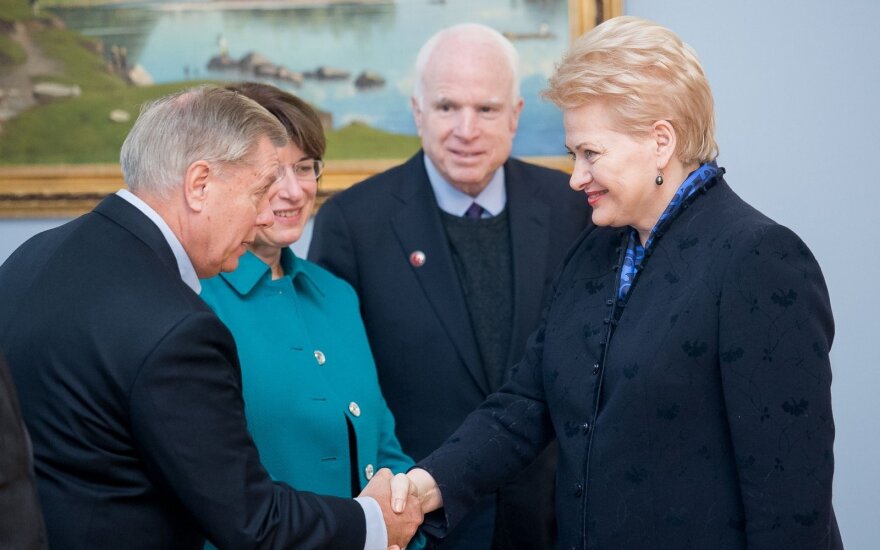 "Given the changing geopolitical environment, the active role that the United States plays in Europe and the region continues to provide the most reliable security guarantees for the Baltic states and for the whole trans-Atlantic community," the President's Office said in a press release after the meeting.

The meeting between Grybauskaitė and Republican Senators John McCain and Lindsey Graham, as well as Democratic Senator Amy Klobuchar addressed Lithuanian-US defense cooperation and implementation of the decisions taken at the latest NATO summit in Warsaw.

Beginning early in 2017, multinational NATO battalion troops will start arriving in Lithuania. A rotational presence of a US battalion is also planned.

In the president's words, Lithuania trusts the US as the leader of the free and democratic world.

"(The country has) repeatedly demonstrated its strong commitment, based on specific capabilities, to NATO’s collective defence," reads the press release.

With the United States and Europe targeted by coordinated cyber attacks, a strong focus was placed on response to hacking. To ensure cyber security, the Lithuanian president said, it is necessary not only to strengthen data protection, but also to safeguard national computer networks from being attacked and to test regularly their resilience against hacking.

US troops should always be in Lithuania - McCain (1)

US troops should be stationed in Lithuania at all times, US Senator John McCain said in Vilnius on...

The Lithuanian parliament on Thursday passed a resolution congratulating US President-elect Donald...