(2)
BNS
aA
Lithuania's President Dalia Grybauskaitė stated on Wednesday that a dialogue with Russia is impossible until Moscow "is engaged in aggression" and supports "terrorists in eastern Ukraine". 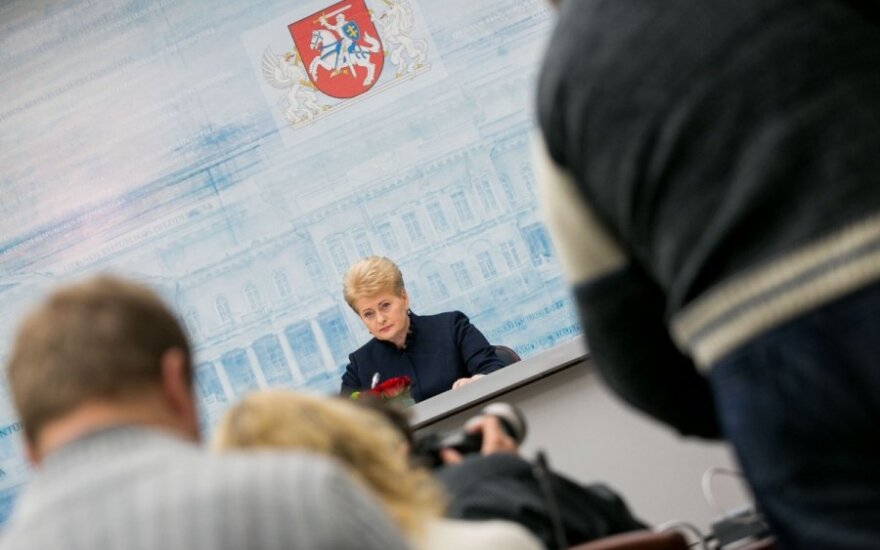 "As long as Russia is engaged in aggression and as long as Russia supports terrorists in eastern Ukraine, a dialogue is not possible," the president said at her annual news conference on Wednesday.

She said that the "EU has only applied targeted sanctions, which are not aimed at the Russian nation and the people of Russia," and they have already yielded results.

"There are no grounds to talk about lifting the sanctions, as the situation and the Russian actions in eastern Ukraine and elsewhere have not changed, therefore, the reasons for imposing them remain valid," said Grybauskaitė.

EU's economic sanctions taken due to Russia's actions in Ukraine are due to expire in July. Making them milder before the deadline or extending them requires support from all 28 EU nations.

French President Francois Hollande stated on Monday that rigid Western sanctions should be recalled, if progress is achieved in the settlement of the Ukrainian crisis.

President Grybauskaitė said she would propose new candidates to head the State Security Department and the Prosecutor General's Office this year.

Speaking at the news conference, she said that neither security chief Gediminas Grina, nor Prosecutor General Darius Valys "lived up to the expectations in connection to their performance".

"New things in the structures are welcome," Grybauskaitė told journalists.

Grina's five-year term is due to expire in April, while Valys' term in office will end in June.

The president refused to specify new candidates on Wednesday.

President Grybauskaitė also said she would approve of a minimum wage increase in July.

"The agenda also includes discussions about the raising of the minimum monthly wage on 1 July, which I would approve of. I’d say it is possible to increase the minimum wage to 325 euros, from 300 euros. I think it would benefit the economy,” she said at the news conference.

Restrictions of Russian TV rebroadcasting is not censorship

The Lithuanian Radio and Television Commission's intentions to restrict broadcasts of two Russian television channels for violations of law are not censorship or restriction of free speech, Lithuanian President Dalia Grybauskaite says.

"It is only censorship when discriminatory laws are in effect or when there are political instructions or pressure to do these things. This is purely a decision made by a commission, executing its rights and duties – the decision will be made by the commission based on its opinion," Grybauskaitė said at the news conference dedicated to overview developments over the past year.

Later on Wednesday, the commission should decide on sanctions for Russian television channels RTR Planeta and NTV Mir Lithuania, which are accused of instigating hatred and publishing biased information their November broadcasts. The commission's head Edmundas Vaitekunas has said that broadcasts of the channels may be banned for up to one year, once all procedures have been completed and refusal by representatives of RTR Planeta and NTV Mir Lithuania to follow the requirements made in negotiations.

The body should also decide on turning to court over suspension of broadcasts of some content of Ren TV Baltic (Lietuva) for three months – independent experts should state their opinion about the content of some of its programs.

The Lithuanian parliament is discussing president-proposed amendments, which would allow imposing a fine of up to 3 percent of income for both broadcasters and rebroadcasting companies.

Greece is unable to fix its economic woes due to failure to take necessary measures in due time, Lithuania’s president has said.

“As far as the situation in Greece is concerned, it’s fully understandable, since that country, albeit teetering on the verge of bankruptcy, still failed to take the necessary radical measures and, therefore, was unable to recover… or to build solid foundations for growth in the next period. This is the reason for those hardships,” Dalia Grybauskaitė said at her annual news conference on Wednesday.

There speculations that Greece may exit the euro area if Syriza, an anti-austerity radical leftist party, wins a snap poll this month.