BNS
aA
The world is not facing a new Cold War, it is getting "very hot", Lithuanian President Dalia Grybauskaitė said at the Munich Security Forum on Saturday, responding to Russia's statements. 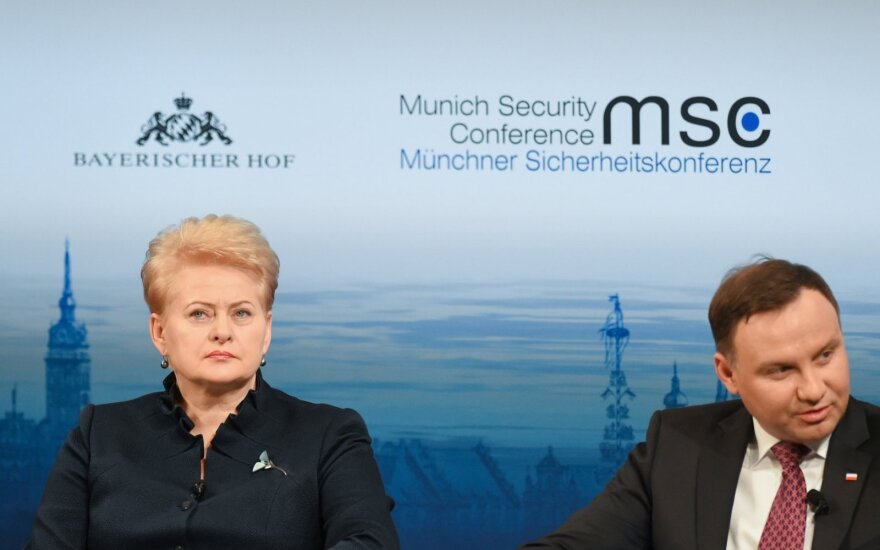 "The security matter arrives from the threat country, from the outside, and today referring to the previous speakers, especially Russia saying that probably the world is facing a second Cold War, I will say that probably the world is facing some hot war, because we already are seeing that the Russians are demonstrating open military aggression in Ukraine, open military aggression in Syria. There's nothing cold, its already very hot," Grybauskaitė said during a presidential debate.

Russian Prime Minister Dmitry Medvedev said earlier that the world was slipping into a new Col War due to tense relations between Russia and the West.

"As we see it, NATO's political line towards Russia remains unfriendly and closed. I can say even more harshly: we have slipped into a new Cold War era," Medvedev said at the Munich Security Conference on Saturday, cited by Interfax news agency.

"To blame Europe or the world that somebody else is imposing such a kind of unpredictable and very aggressive behaviour, nobody will believe it, nobody will take it. It looks like we are talking like different civilizations still, we are not able to understand each other," Grybauskaitė said.

Polish President Andrzej Duda noted during the debate that the key thing for Poland was to strengthen NATO capabilities in Eastern Europe. In his words, it was a natural process in progress as after Eastern European countries had joined NATO and the Alliance's external border moved eastwards.

The Lithuanian president also pointed to her country's efforts to step up its own defence. "We ourselves need to do a lot of things, and we are doing it, we have increased defence expenditure," she said.

The Lithuanian president was attending the annual Munich Security Conference, the most important independent forum in the region which discusses key international security policy challenges, her office said.

This year, the conference focused on the threat of terrorism, the refugee crisis, the upcoming NATO summit in Warsaw, the Alliance's future and the security situation in Africa and the Middle East.

The US should stop making defence promises which serve the interests of other nations rather than...

One cannot choose one's neighbours. We have been assigned ours by history and geography. Lithuania...