BNS EN
Lithuania's President Dalia Grybauskaitė told US President Donald Trump at the summit of Central and Eastern European leaders in Warsaw on Thursday about the importance of regional security and the threats of the Astravyets Nuclear Power Plant (NPP). 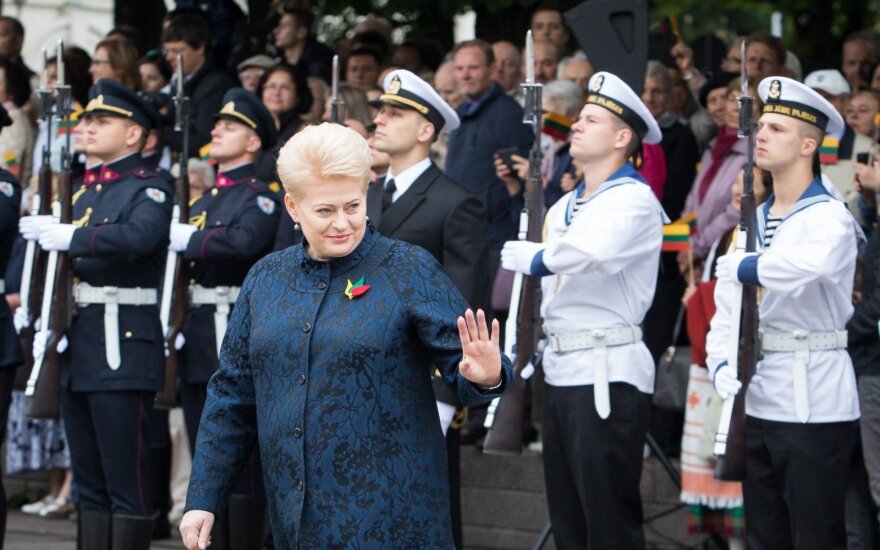 "Today in Warsaw all Eastern Europeans and leaders of countries in our region had an opportunity to speak again, meet and state our opinion to US President Trump. We have mentioned this to him in Brussels and now had a good opportunity to show and explain our specifics, the threats we are faced with and the expectations we have from the US," Grybauskaitė said in a comment circulated by the President's Office.

In her words, not only promises but actual tasks are now heard from the US when it comes to regional security.

"We hear very clearly not only the reassurance about security but see specific results. This comes in the shape of 40 percent increase in the deterrence budget for the Eastern flank. We see deployment of US troops in Lithuania and the Baltic states. We hear and know that this will be a promise during the Zapad 2017 exercise, we are expecting an increased contingent in our countries. We see actual work to guarantee our security," said the Lithuanian president.

According to the press release, the Lithuanian leader emphasized the importance of regional security at the Thursday's meeting.

In Grybauskaitė's words, active role of the US is keystone for Pan-European security. In the face of military and non-conventional threat from Russia, the troops of the most powerful state in the world ‒ the US ‒ and advance stationing of equipment in the region are the best measures of deterrence. According to the Lithuanian president, the contribution of the US is paramount for ensuring regional air defense.

In her address to leaders from 12 countries around the Adriatic, Baltic and Black seas, Grybauskaitė also expressed concerns over the threats posed by the Astravyets NPP under construction in Belarus close to Vilnius.

The Lithuanian head of state also took note of the American and regional presidents to the fact that Nord Stream 2 pipeline and the unsafe Astravyets NPP, which is under construction by Rosatom and which nuclear pollution may reach 16 European capitals in case of accident , are intended to be used by Russia as tools of non-conventional blackmail.

Grybauskaitė also mentioned Lithuania's readiness to boost its presence in the US-led anti-ISIS operation, the NATO mission in Afghanistan and the United Nations (UN) mission in Mali.

Trump made the stopover in Poland ahead of the G20 summit in Germany. Some observers say the meeting in Warsaw will demonstrate Poland's regional leadership as an offset to the Germany and France-dominated bloc in the European Union.

Concerns had rippled across Eastern European countries after Trump's election campaign pledged to improve the relations with Russia and undermined NATO, dismissing the Alliance as outdated. Furthermore, he refused to state public support to the principle of collective defense during a recent visit in Brussels.

The Astravyets NPP is being built some 50 km from Vilnius by the Russian Rosatom corporation. Lithuania's government says the construction is in violation of security and environmental standards.

Frans Timmermans , first vice-president of the European Commission currently on a visit in Vilnius,...

The Parliamentary Assembly of the Council of Europe (PACE) called on Belarus to suspend the...

A group of Lithuanian lawmakers propose that the Seimas should formally invite Polish, Latvian and...

Exceptionally few human decisions will lead to consequences measured in a dozen thousand or a hundred...