BNS
aA
The new tougher sanctions over the ongoing crisis in Ukraine, agreed by the European Council late on Wednesday night, are still not sufficient, Lithuanian President Dalia Grybauskaitė says. 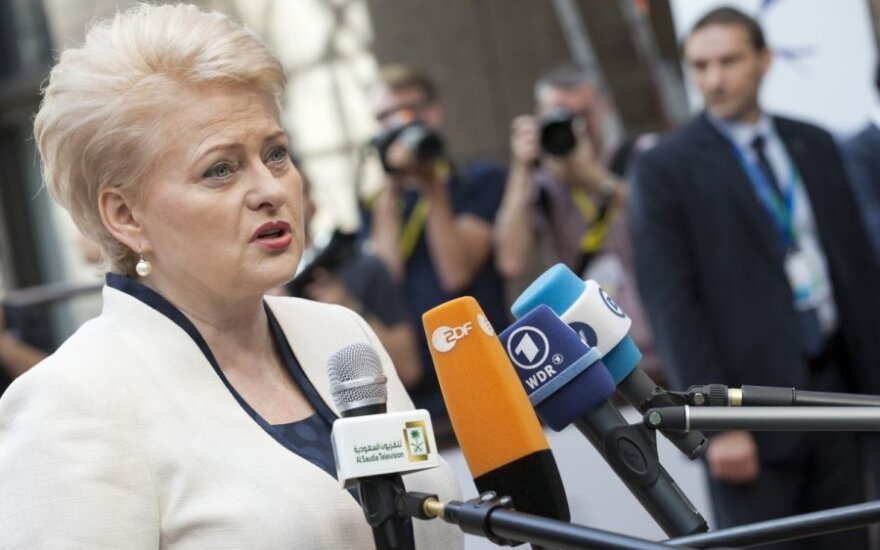 "It think that it is a mistake to think there is no effect. The effect does exist and we see the results in the economy of Russia (...), but, of course, these measures are not sufficient because they are not directly applied to those who are responsible for the occupation of Crimea directly, for today's expansion of military actions in eastern Ukraine and the use of heavy military equipment. All these things are a little better represented in the conclusions but it's not sufficient at all," Grybauskaitė said.

EU leaders agreed late on Wednesday, among other things, to freeze new investment programmes in Russia by the European Investment Bank and European Bank for Reconstruction and Development.

There's already a travel ban in place for 72 persons from Russia and Ukraine who have contributed to the escalation of the crisis and their assets are also frozen.

The new measures will be "targeting individuals or entities who actively provide material or financial support to the Russian decision-makers responsible for the annexation of Crimea or the destabilizations of Eastern-Ukraine," according to the conclusion of Wednesday's meeting.

The European Union has, however, failed to take action against Russia's specific economy sectors or impose sanctions against high-ranking Kremlin officials as well as failed to agree on an arms embargo against Russia.

Lithuanian Foreign Minister Linas Linkevičius on Thursday seconded President Grybauskaitė, saying he would like to see the European Union imposing tougher sanctions against Russia over the escalation of the Ukrainian crisis. He also welcomed the US leadership in this area.

"I believe European sanctions should be and could be tougher and deeper. That potential hasn't been used up. But the positive thing is that they have been announced," he told journalists during a joint press conference with visiting European Commissioner for Enlargement and European Neighbourhood Policy Stefan Fule in Vilnius.

The new EU move came soon after the United States announced tighter economic sanctions against Russia. The US Department of the Treasury said the new measures would include sanctions against oil giant Rosneft and bank Gazprombank. The list of persons the new sanctions apply to includes Deputy Speaker of Russia's State Duma Sergey Neverov, Minister for Crimean Affairs Oleg Savelyev and Igor Shchegolev, an aide to Russian President Vladimir Putin.

"We welcome the leadership of the United States (...) in introducing sanctions for the very sensitive segments, financial, the military industry," Linkevičius said.

"I consider yesterday's sanctions adopted by the European Union and United States as adequate and (sending – BNS) a strong signal to Moscow that not sufficient and credible steps have been made to stop the destabilizing situation in eastern Ukraine," the commissioner told journalists.

The Ministry of Foreign Affairs of Lithuania has issued a statement on the situation in Ukraine ....