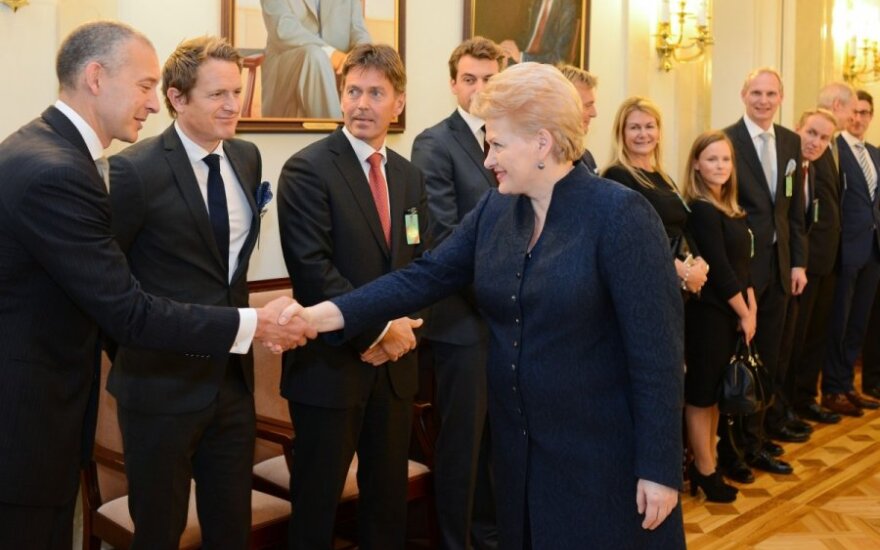 According to the president, Lithuania and Norway are linked not only by strong political ties, but also by successful economic cooperation. The trade turnover between Lithuania and Norway has soared by 72 percent over the past four years. This is the best proof that Norway values Lithuania as a reliable partner.

"Lithuania's economic growth has been one of the fastest in the European Union. Continuously increasing foreign investments in our country show that we are able to improve business environment and that trust in Lithuania is obviously growing," she said.

President Grybauskaitė noted that good economic relations between Lithuania and Norway were further strengthened by cooperation in the energy sector. The liquefied natural gas storage vessel, called a symbol of our country's energy independence, was built and leased to Lithuania by Norwegian company Hoegh LNG. Besides, in summer an agreement for the liquefied natural gas supplies was signed with Norwegian company Statoil. This agreement will not only ensure continuous operation of the LNG terminal, it will also guarantee an uninterrupted alternative source of gas imports.

Norway has been leader in terms of the number of investment projects in Lithuania in the period 2010-2014. It is the fifth largest foreign investor in our country. The trade turnover between Lithuania and Norway accounted for more than 2 billion litas over the past four years.

Following the meeting with the president, the Norwegian business delegation will meet with representatives of the Bank of Lithuania, NASDAQ OMX Vilnius stock exchange, and Invest Lithuania agency.

The Standing NATO Mine Countermeasures Group One, SNMCMG1, including the Lithuanian Minelayer LNS...

Minister of Foreign Affairs Linas Linkevičius , who paid a visit to Oslo on Tuesday, noted...