Elta EN
aA
The new team which will join the president during her second term has been announced on Saturday. Valdemaras Sarapinas will lead the National Security Group, Giedrė Kaminskaitė-Salters will lead Economic and Social Policy Group. Modestas Naudžius will be the president's spokesman. 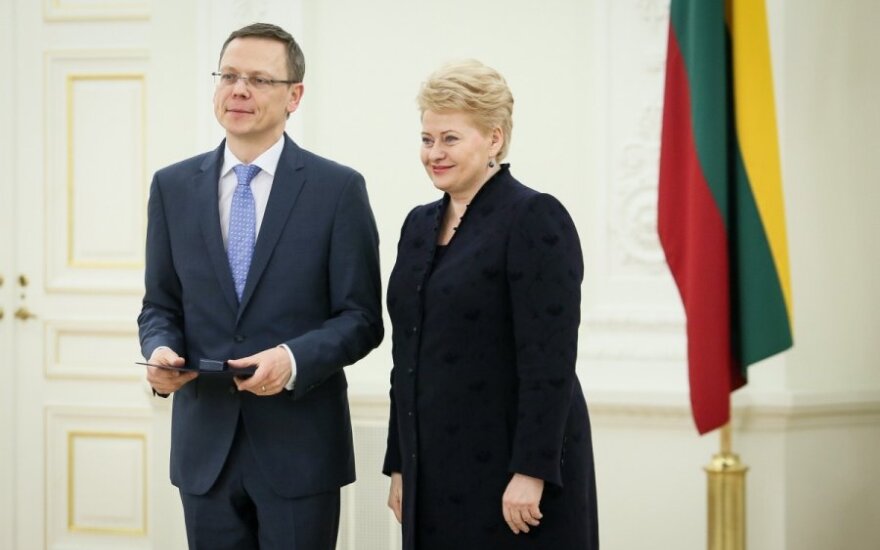 The 43-year-old Naudžius is an experienced journalist who has worked as a reporter, news editor in television and radio, and headed news service of one of Lithuania's major radio stations. Since 2003, Naudžius has been a journalist and producer for the national television LRT.

Head of the Economic and Social Policy Group, Giedrė Kaminskaitė-Salters, received her bachelor's degree in International Relations and Affairs from London School of Economics and Political Science. She received her master's degree in International Relations from Oxford University. She also studied in Maastricht University and received her doctorate degree in law. In 2011-2013, she worked for Office of Gas and Electricity Markets (OFGEM) in the UK as Head of Enduring Regime Implementation, Offshore Transmission.

Head of the National Security Group, Valdemaras Sarapinas, has worked as deputy minister of national defence, he was the chancellor of the Government Office in 2006-2009. For the last four years Sarapinas was Consul General of Lithuania in New York.

Chief Advisor Virginija Budienė will be the head of the Domestic Policy Group. Rūta Kačkutė will lead the group for Education, Science, Culture and Non-governmental Organisations.

Inauguration events for Lithuanian President Dalia Grybauskaitė , who was re-elected for a second...

President Dalia Grybauskaite says that her second term of office will differ from the first one not...