BNS EN
aA
President Dalia Grybauskaite on Friday congratulated Ukrainians on the start of visa-free travel to the European Union and urged them to continue reforms in order to join the EU and NATO. 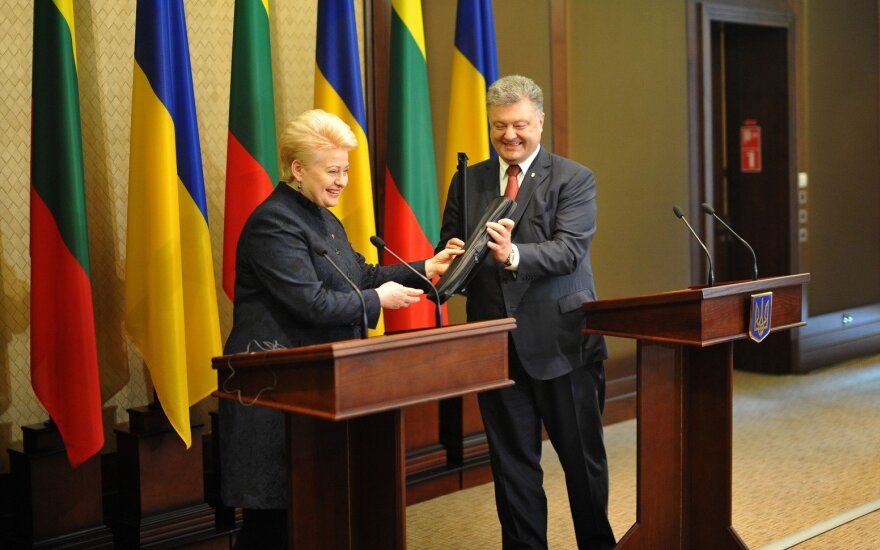 "We will welcome you with open hands and with smiles, because we feel we are friends historically and today, and we are ready to help," Grybauskaite told reporters in the eastern Ukrainian city of Kharkov after meeting with her Ukrainian counterpart, Petro Poroshenko.

According to the Lithuanian president, Ukrainians have made more progress in the past two to three years than in the previous two decades of independence.

Ukrainians see the visa-free travel to 30 European countries, which will take effect on Sunday after lengthy delays, as a major victory on their European integration path, but their joy is overshadowed by worries over government corruption and the unflagging war in the east.

The visa-free negotiations forced Ukraine to carry out a part of reforms, such as implementing an advanced electronic declaration system.

However, some observers are worried that the approaching presidential and parliamentary elections, due in 2019, may dampen the government's zeal for further decisive changes in law-enforcement and public administration.

Aivaras Abromavicius, a former Ukrainian economics minister, says that Lithuanian politicians, who are popular in Ukraine, should not only support the authorities, but also press the political elite to take more active measures for curbing corruption.

Grybauskaite on Friday underscored the need for Ukraine to continue reforms in order to move closer to the EU and NATO.

"Only democratic countries which respect the rule of law and human rights could apply for NATO membership," she said, adding that reforms will help improve the well-being of the people of Ukraine.

The security situation on the front line is high on the agenda of Grybauskaite's meetings with President Poroshenko and with troops who had their battlefield injuries treated in Lithuania.

Both presidents said at the news conference that they were confident that the new US administration, together with the EU, would continue their pressure on Moscow.

"I don't see any threat for the sanctions policy, because we have a clear message from the US that they will increase sanctions against Russia if Russia does not implement (the Minsk agreements)," Poroshenko said.

Around 50 Lithuanian military instructors, including special operations forces, are serving in Ukraine on a permanent basis. Some 150 Ukrainian troops have received medical treatment in Lithuania. The Lithuanian Armed Forces have handed over tons of ammunition and unused parts of automatic weapons to Ukraine.

Lithuania's President Dalia Grybauskaitė on Friday arrived in the city of Kharkov in eastern...

On the 9-year anniversary of the Russia - Georgia war, Georgia's then leader Mikheil Saakashvili...