BNS
aA
Lithuania's outgoing President Dalia Grybauskaite on Tuesday warned that statements on cooperation with hostile countries might become a threat to Lithuania. 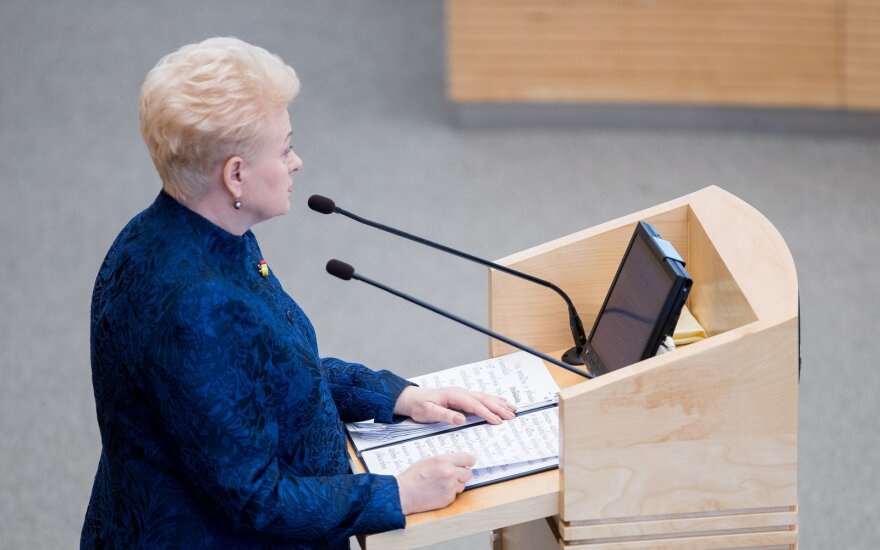 The president warned about this while delivering her 10th an last State of the Nation Address.

The president warned about this while delivering her 10th and last State of the Nation Address.

Political experts say such comments can be viewed as a criticism of Prime Minister Saulius Skvernelis' initiatives and a warning to President-elect Gitanas Nauseda over dialogue with Russia and Belarus.

"Immature political decisions and statements about cooperating with hostile countries can create creeping threats that will turn us into hostages when we have to choose between bad and dangerous," the president said.

She did not mention specific countries or specific statements but Grybaskaite has in recent years criticized Russia and Belarus and disapproved of dialogue with these countries.

Related articles
Grybauskaite as next president of European Council: strengths and weaknesses
President votes in dual citizenship referendum but refuses to vote on MP number

In her annual address, Grybauskaite also said that Lithuania's foreign policy is based on "values and trust – not fear or submissiveness – inspires respect for Lithuania."

"The international order is changing, and we need to keep a strong backbone of values. Ultimately, it pays back better than trying to please someone," the president said.

During Grybauskaite's presidential term, Lithuania has been one of the major critics of Russia in the European Union, and has recently blocked Minsk's agreements with the EU and NATO.

The president's position has been that top-level dialogue with Belarus is not meaningful due to its ties with Russia, and also because of the Astravyets nuclear power plant.

Both Prime Minister Saulius Skvernelis, and President-elect Nauseda are more open to dialogue with Belarus. They stress Lithuania's interest in maintaining Belarus independent and ensuring the safety of the nuclear power plant.

Skvernelis has also proposed restoring political contact with Russia, despite voicing its strong support to the existing sanctions for Moscow over its intervention in Ukraine.

"I would say the president's comments are linked to the prime minister's ideas on cooperation with Belarus or political contact with Russia, and probably they also are a warning to the president-elect about possible risks posed by such initiatives," Ramunas Vilpisauskas, director of the Institute of International Relations and Political Science at Vilnius University, told BNS Lithuanian on Tuesday.