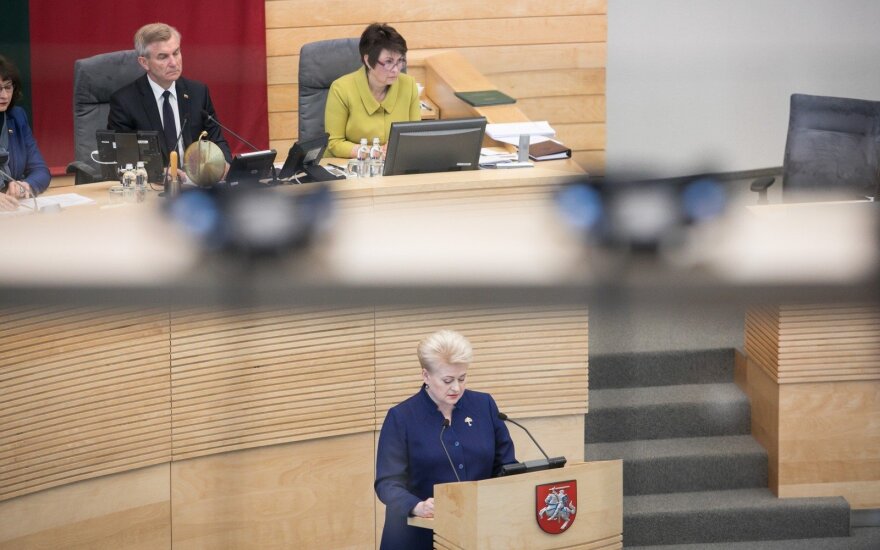 "People expect the public sector reform to end the nomenklatura rule. They hope that the new government will not surround themselves with only their own kind. That it will be resistant to narrow-interest lobbying and that the restructuring process will not end in a few job cuts or 100-percent salary increase for certain officials. However, the prolonged confusion in state governance and the vagueness of some reforms are already causing alarm," she said in her annual State of the Nation Address to the Seimas.

According to the president, the overhauling of state forests is stalling, the Seimas and municipalities "are entangled in suspicious intra-group transactions", and the start of the government's planned education reform "seems to focus on dividing up immovable property".

The ruling coalition parties have launched discussions on merging the country's 42 independent forestry enterprises into a single legal entity and have tabled a university optimization plan. The government also has also unveiled a plan for certain tax changes. However, the parliament has so far only managed to pass a package of amendments aimed at reducing access to alcohol.

"Political responsibility does not mean sectoral reshuffling – it means coordinated work and joint responsibility for the sum total of decisions critically important to the people of Lithuania. Neither the Tripartite Council nor bulldozer-style pseudo democracy will add the necessary political will to the decision-making process. Major changes and effective self-cleaning require not only courage and resolve, but also common sense," Grybauskaitė said.

The president said that the current education reform "looks like an imitation of action".

In the president's words, "low quality education is becoming an issue of national security" and is "the cause of emigration, social exclusion, declining investment, economic stagnation, and most importantly corruption".

"The restructuring of the education system is described as the priority of priorities in all election programs and the government’s action plan. It seemed that a broad political understanding and agreement had already been reached on this matter," she said.

"Meanwhile, here is what we see and hear instead of 'quality change': ten days added to the school year, plans devised to redistribute and sell off buildings," Grybauskaitė said. "It looks like an imitation of action. Uncertainty and chaos have doomed the reform even before it got started. Lack of political will in critical decision-making and entanglement in petty details is becoming a serious problem".

"Brave decisions can be made only by men and women whose hands are untied. If invisible interests are guiding the hand, the dismissal of even one top executive becomes a matter more complicated than the entire centenary program of cultural events," she added.

Under the Lithuanian Constitution, the president delivers the State of the Nation Address on the situation in the country and its internal and foreign policies to the Seimas once in a year.

Grybauskaitė was elected as president in May 2009 and re-elected for her second five-year term in June 2014.