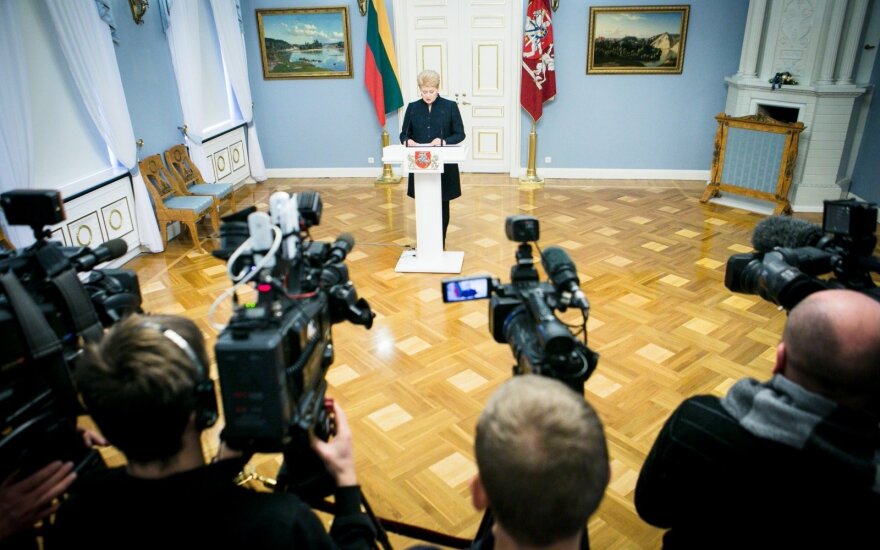 The new government will take office after its program is endorsed by the Seimas and the ministers are sworn in.

The members of the new Cabinet include Kęstutis Navickas, chairman of the Coalition of Lithuanian Environmental Organizations, as environment minister, Žygimantas Vaičiūnas, now Lithuania's energy attaché in Brussels, as energy minister, and Vilius Šapoka, a former director of the Financial Services and Markets Supervision Department at the central Bank of Lithuania, as finance minister.

Raimundas Karoblis, a diplomat who holds the post of deputy foreign minister in the outgoing government of Social Democratic Prime Minister Algirdas Butkevičius, becomes the next defense minister, and Liana Ruokytė-Jonsson, an actor, translator and culture diplomat, gets the job of culture minister.

Linas Kukuraitis, a social science expert who now heads the charity organization Caritas of the Roman Catholic Archdiocese of Vilnius, was appointed as social security and labor minister, and outgoing Energy Minister Rokas Masiulis, an economist by profession, was given the post of transport minister in the new coalition government.

Aurelijus Vėryga, a professor of biomedical sciences and a member of the new Seimas, was approved as health minister, Jurgita Petrauskienė, director of the research and higher education monitoring and analysis center MOSTA, as education and science minister, and Social Democrat Julius Pagojus, a former deputy justice minister who currently heads the State Consumer Rights Protection Authority, as justice minister.

Linas Linkevičius, a Social Democrat, stays on as foreign minister.

Other members of the new Cabinet include Mindaugas Sinkevičius, a Social Democrat who has held the post of mayor in the central Lithuanian district of Jonava since April 2011, as economy minister, Eimutis Misiūnas, now a judge, as interior minister, and Bronius Markauskas, a farmer and former chairman of the Lithuanian Chamber of Agriculture, as agriculture minister.

Grybauskaitė said when announcing the new Cabinet line-up on Tuesday that her main requirements for the candidates were knowledge of their respective field and an impeccable reputation.

"In consultation with the prime minister, we managed to find people meeting the principles and these requirements to fill all positions," she told reporters.

In her words, the Cabinet line-up "gives hope that it is possible to move to a higher quality state administration than it has been up to now."

The president underlined the importance of cooperation between the new government and the new parliament and expressed her hope that politicians would show "a political culture based on the interests of all people of Lithuania."

"I wish the new Cabinet and the newly-elected Seimas success in their joint work and in meeting people's expectations to have a transparent and responsible government," she said.

Grybauskaitė appointed Skvernelis, the man who led the Peasants and Greens to their victory in last month's parliamentary elections but is not a member of the party, as prime minister last week.

Lithuania must ensure the representation of the interests of all persons living together, Julius...

EnergMin candidate says closure of ministry not a priority issue

Žygimantas Vaičiūnas , the Lithuanian Peasant and Green Union's candidate to become the...