BNS
aA
Pope Francis, who arrived in Vilnius on Saturday, called on Lithuanians to be open and compassionate and become "a bridge between Eastern and Western Europe". 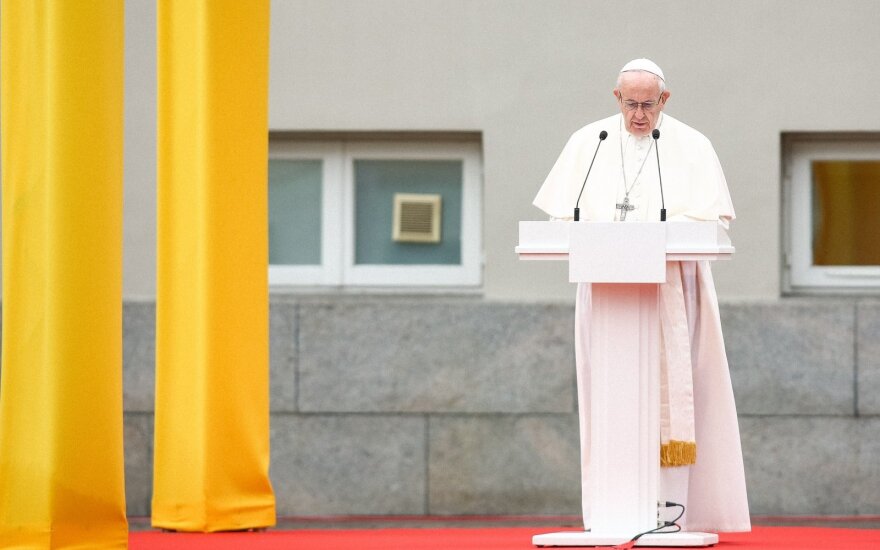 In his speech in Simonas Daukantas Square outside the Presidential Palace, the Holy Father addressed members of the government and the public.

The pope also said that Lithuania could become a counterbalance to voices that are sowing division and are not promoting unity.

"If we look at the whole scene in our time, more and more voices are sowing division and confrontation – often by exploiting insecurity or situation of conflict – proclaiming that the only way possible to guarantee security and the continued existence of a culture is to try to eliminate, cancel or expel other. Here you, Lithuanians, have a word of your own to contribute: "welcoming differences"," the pontiff said.

"Through dialogue, openness and understanding, you can become a bridge between Eastern and Western Europe," Pope Francis said.

In his words, " the fruit of a mature history, which you as a people can offer to the international community and to the European Community in particular" might help Lithuania to promote these characteristics.

The Holy Father also pointed to the fact Lithuania was able to shelter, receive and accept people of various ethnic groups and religions. All found a place to live in this land – Lithuanians, Tatars, Poles, Russians, Belarusians, Ukrainians, Armenians, German, Catholics, Orthodox, others.,

Congratulating Lithuania on the centenary of its independence, the pope called on Lithuanians to take "time to stop and revive the memory of all of those experiences".

In his words, it will allow to "find the key to assessing present challenges and looking to the future in a spirit of dialogue and unity with all those who dwell here, careful to ensure that no one remains excluded".

The pope also called on Lithuania to remember the soul of the Lithuanian people which helped it to turn "sorrow and injustice into opportunity, preserving alive and healthy the roots that nurtured the fruits we enjoy today".

"This is the prayer voiced in your national hymn: "May your sons draw strength and vigor from your past experience," so as to face the present with courage," the pope said in his speech.

The Holy Father also invited Lithuania to pay special attention to young people who, he said, are not only the future but also the present.

"A people in which young persons can find room for growth and for employment, will help them to feel that they have a leading role to play in building up the social and communitarian fabric. This will make it possible for all to lift their gaze with hope to the future," the pope underlined.

On Saturday, the head of the Roman Catholic Church will pray at the Gate of Dawn chapel before meeting with young people in the capital's Cathedral Square in the evening.

On Sunday, the pope will go to Kaunas to celebrate Holy Mass in the city's Santakos Park and will travel back to Vilnius later in the day to visit a monument to the victims of the Vilnius Ghetto and the Museum of Occupations and Freedom Fights.

Later on, the pontiff will travel to Latvia and Estonia.