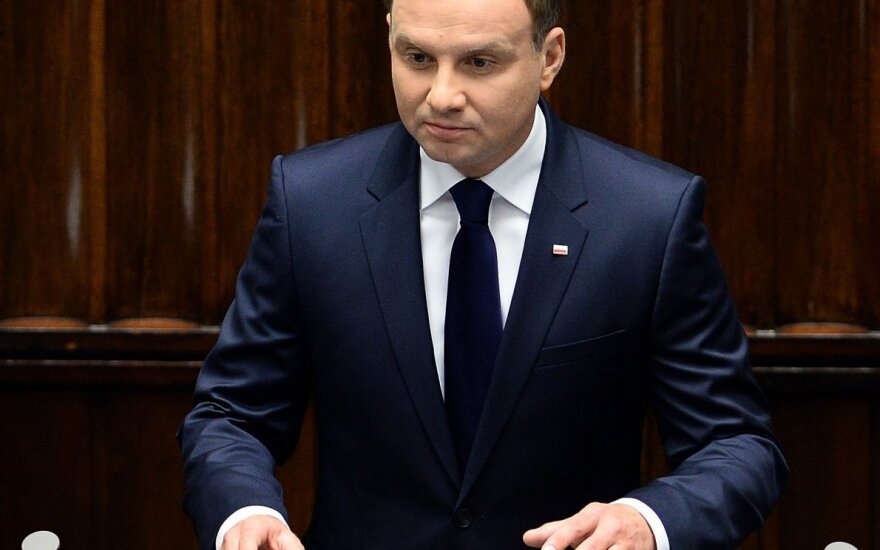 Lithuanian political experts believe Vilnius was not included into the Polish president's visit list because of bilateral problems related to ethnic minorities.

"The Polish president gives his attention to the Baltic states in the context of the existing challenges but it shows that Lithuania is not the first partner among the Baltic states," Professor Šarūnas Liekis of Lithuania's Vytautas Magnus University told BNS on Monday.

In his words, the move reflects the fact that frost in bilateral relations does not depend on a specific person and is, to a large extent, determined by the fact that Lithuania "is not moving from the death point" regarding the issue of the original spelling of Polish names.

Social Democrat MP Benediktas Juodka, chairman of the Lithuanian Seimas Committee on Foreign Affairs, told BNS the Polish president's choice of Estonia, instead of Lithuania, is "a bit strange" but it reflects not-so-good bilateral relations.

"We are neighbours, and taking into account our joint history, one would think Lithuania should be chosen out of the three Baltic states, but it's the way it is. It's a certain sign that President Duda sees that our relations could be better," the politician said.

Social Democratic Chairman of the Seimas Committee on European Affairs Gediminas Kirkilas believes a bill on the original spelling names, currently being deliberated by the Lithuanian parliament, could improve bilateral relations with Poland as it would allow the spelling of names using Polish characters.

"I believe the new president's choice of visits might reflect his unwillingness to escalate those recent never-ending Lithuanian-Polish problems related to ethnic minorities," Kubilius told BNS.

Poland has criticized Lithuania in recent years for the Polish ethnic minority situation in the country but Lithuania has rejected criticism as unfounded.

Duda will pay a visit to Tallinn on August 23 as the anniversary of the Molotov-Ribbentrop Pact on the division of Eastern Europe, signed by Nazi Germany and the Soviet Union on the eve of WWII, will be marked.

On August 28, the Polish president will go to Berlin and will visit London on September 15. In late September, Duda is scheduled to travel to New York. He will also attend a regional NATO meeting in Romania in November.