Aleksandra Ketlerienė
Parašyti
autoriui
aA
On Tuesday, the Electoral Action of Poles in Lithuania – Christian Families Union (LLRA-KŠS) organised a press conference in Seimas, where they presented their position on joining the coalition government. According to the party’s representatives, so far a decision on joining has not been made and everything depends on the majority’s reception of the LLRA-KŠS’ proposals. 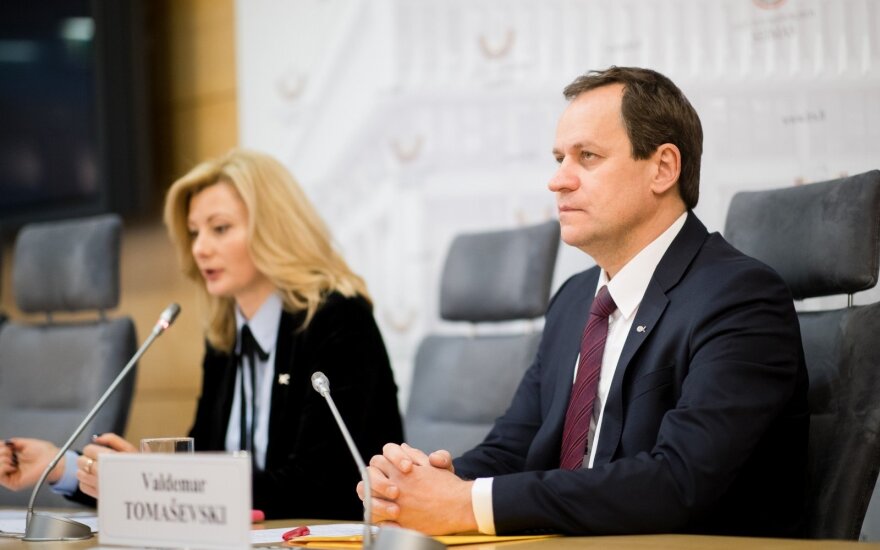 Valdemar Tomaševski, the head of the LLRA-KŠS states that the party's main condition is implementing their programme precepts, which according to him, seek social justice. The politician states that funding exists, just the desire to use it is needed.

Two proposals have been made by the LLRA – firstly, to increase children's euro to at least 60 euro next year and commit to raising it to 120 euro by 2020 for every child. The second is free medicine for seniors over 75 years old. V. Tomaševski noted that for now there is no talk about specific ministries, but the LLRA-KŠS has candidacies they could propose. As for how its proposals should be financed, the LLRA-KŠS suggests to further tax bank assets.

Related articles
LRT Investigation. The scattering Russian Alliance is hunting members: how did V. Tomaševski‘s Poles help it?
Party clashes: what will frighten the ratings leaders?

The party notes that it is in no rush to join the coalition, however, citing "bitter experiences" where it left a coalition with Algirdas Butkevičius' government before the end of term.

The press conference also touched on the controversial children's rights reform and striking educators. For the first, R. Tamašunienė of the LLRA notes that there is need to apply criteria of common sense and humaneness and the legislation should be amended. In terms of the teachers' strike, the LLRA's representatives stated that there is a lack of constructive dialogue, however the wage payment model itself is adequate.

When questions turned to LVŽS chairman Ramūnas Karbauskis' statement that the LLRA-KŠS cannot be handed the office of minister of education and science, V. Tomševski only responded that at the moment, no talks are being held regarding ministerial offices.

On Tuesday, the leaders of the Lithuanian Farmer and Greens Union (LVŽS) stated that they do not dismiss the possibility that the LLRA-KŠS could join the ruling coalition and the party's members could be offered ministerial offices, with three having just been vacated.

At the same time, R. Karbauskis expressed doubt on whether a representative of the LLRA-KŠS could lead the Ministry of Education and Science. "I believe that the leadership of the Electoral Action of Poles would raise more doubts than confidence in matters of education," he stated.

Delfi reminds that on Monday, S. Skvernelis declared the dismissal of three cabinet ministers – education and science, culture, as well as environment.

Currently the ruling coalition is comprised of the LVŽS and Lithuanian Social Democratic Labour Party (LSDDP). They are supported by the Order and Justice group.

LRT Investigation. The scattering Russian Alliance is hunting members: how did V. Tomaševski‘s Poles help it?

Russian Alliance leader Irina Rozova’s business trips are planned with the aid of the Russian...

Party clashes: what will frighten the ratings leaders?

The Social Democrats and Order and Justice are the parties, which could draw the closest to the...

E. Gentvilas on Skvernelis’ move: with one more minister removed, he would run for president as a victim