BNS
Polish Foreign Minister Jacek Czaputowicz on Thursday called on Lithuania to allow the original spelling of the names of local Poles in their passports. 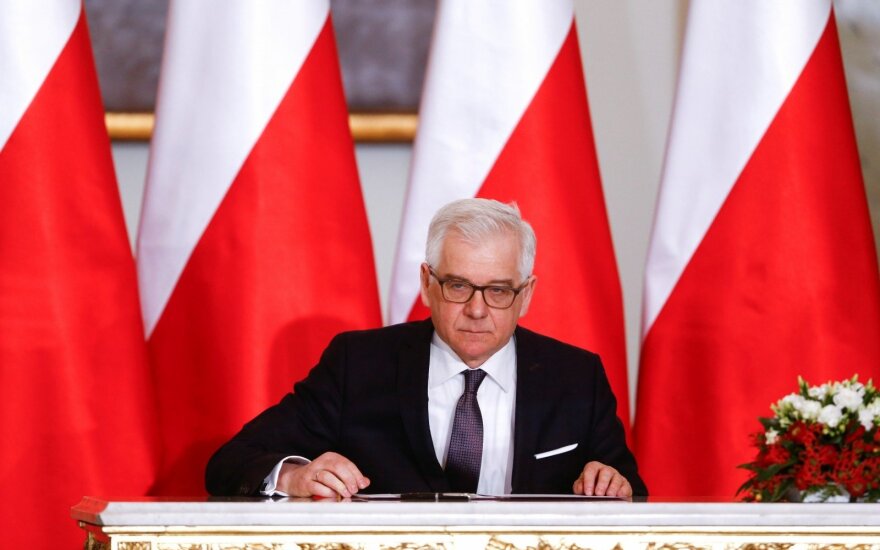 Czaputowicz also urged Lithuania's authorities to allow the names of streets and other public places in areas with large ethnic Polish populations to be spelt in the Polish language.

"The Lithuanian minority in Poland (...) has no problems when it comes to using Lithuanian letters in their forenames and surnames, as well as in the names of places, and we believe that these issues in Lithuania should be regulated in the same way," he told reporters in Vilnius.

Local officials in the districts of Vilnius and Salcininkai more than a decade ago tried to put up street signs in Polish and Russian, but were ordered by courts to remove them.

The Law on the State Language forbids languages other than Lithuanian on public signs.

Leaders of the Seimas have said that bills on the spelling of personal names in documents will be debated on during the fall session.

One of them would allow the original spelling of the first and last names of a Lithuanian citizen on the main page of his or her passport if the person provides a source validating the non-Lithuanian version of the name.

A second bill provides for using non-Lithuanian letters on an additional page of one's passport or the reverse side of one's identity card.

The government favors the first option.

Lithuania's current laws do not allow letters that do not exist in the Lithuanian alphabet to be used in Lithuanian citizens' documents.

Poland vows to back Hungary in row with EU, Lithuania calls for dialogue

Polish Foreign Minister Jacek Czaputowicz , on a visit to Vilnius, on Thursday vowed to support...

Poland is relocating its embassy to the Pac Palace, a historic building in Vilnius' Old Time that...

The prime ministers of the three Baltic states and Poland will discuss the planned synchronization...

Lithuania's Parliamentary Speaker Viktoras Pranckietis stated on Monday he saw efforts at the...