BNS
aA
Lithuania's Prime Minister Saulius Skvernelis says he would offer the post of social security and labor minister to the Social Democrats, if the party's leader Gintautas Paluckas sought to fill it. 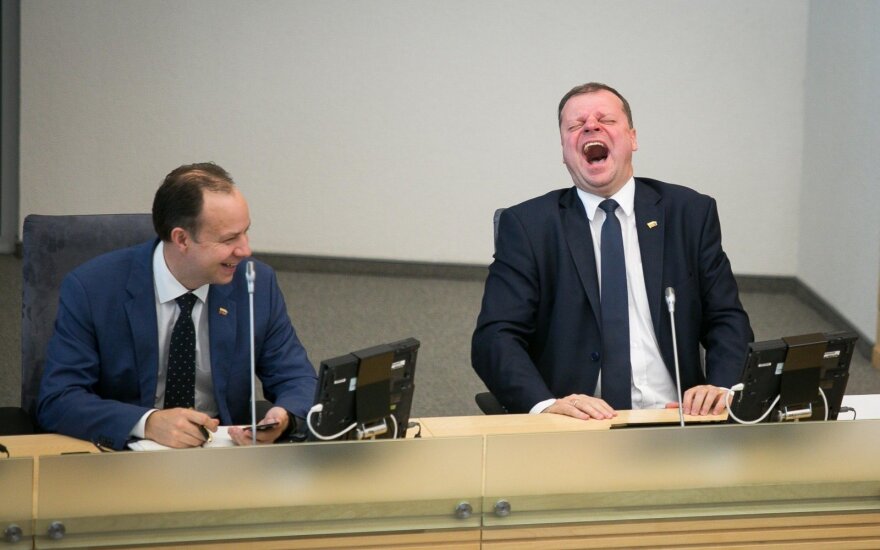 Swapping the top positions at the Economy Ministry currently controlled by the Social Democrats to the Social Security and Labor Ministry was on Tuesday proposed to the leaders of the ruling Farmers and Greens Union and Skvernelis by the elder of the Social Democratic political group, Andrius Palionis. Palionis and some other members of the group have decided to stay in the ruling coalition against the will of the party and Paluckas.

"I would give it serious thought, if the Social Democratic party's leader aimed to take the post and take responsibility," Skvernelis told journalists at the government.

He emphasized he was "very serious," at the same time noting he had nothing against Linas Kukuraitis, the incumbent social security and labor minister who, in his words, "is working in the position and will probably continue."

"But if our partners wanted this and the party's leader took on the challenge, we could consider anything," said the prime minister.

Palionis said at the parliament earlier on Tuesday that the breakaway had multiple candidates "from the Seimas and from outside the Seimas."

LFGU leader Ramūnas Karbauskis who was present at the meeting with Palionis also expressed support to the LFGU-delegated Kukuraitis, adding that the proposals were to be considered by the prime minister.

Social Democratic lawmakers who have opted to stay in the ruling coalition despite their party's...

The Lithuanian Farmers and Greens Union's (LFGU) leaders say they are confident that Social...

Lithuania's Social Democratic Economy Minister Mindaugas Sinkevičius will remain in his post for...

The Lithuanian Social Democratic Party’s (LSDP) MPs who have opted to continue cooperation with...

The Ethics and Procedures Commission of the Lithuanian Social Democratic Party on Saturday proposed...

Social Democrat rebels are not yielding