BNS
aA
Lithuanian Prime Minister Saulius Skvernelis on Thursday met with a delegation of American congressmen and says they assured him of support to Lithuania for ensuring security. 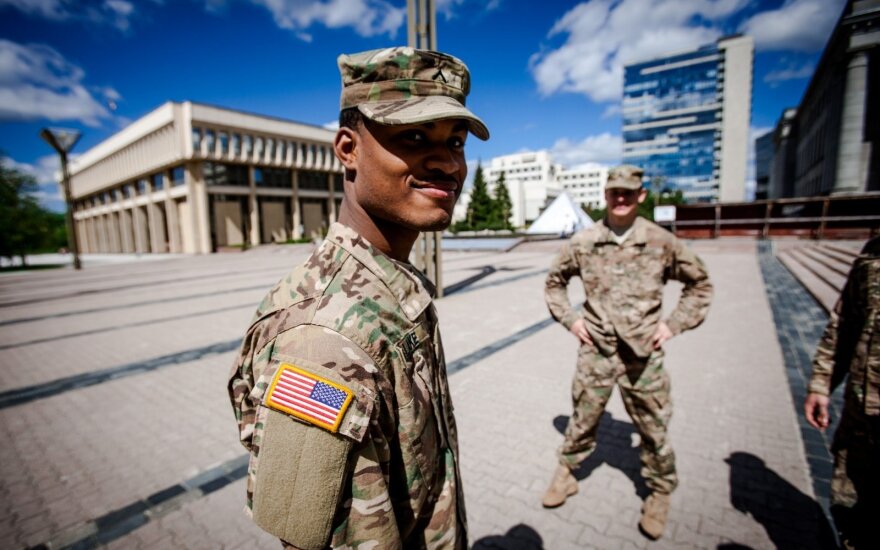 USA soldiers in the front of the Seimas
© DELFI / Šarūnas Mažeika

"I am glad to say that the congressmen are well aware of Lithuania's historic affairs, nuances and are well aware of the security situation we are in today and the importance of the strategic partnership with the United States for us – from security and defense issues to economic issues and the provision of strategic energy resources," the prime minister told journalists.

In his words, the representatives of the US House of Representatives sent "a clear message of support to Lithuania and a certain signal to our neighbor".

"America is America. We heard from the congressmen what we probably are used to hear. And that is real politics," Skvernelis said.

Thanking the US delegation for support, the Lithuanian prime minister stressed that the United States' leadership "remains a key prerequisite for maintaining the post-WWII global order ensuring peace and well-being through the rule of law".

In his words, one cannot allow doubts of NATO being a strong and trustworthy alliance.

"We know who we are dealing with, and any internal doubt would be taken advantage of. We have no down in NATO's solidarity," the prime minister said in a statement.

During the meeting, the congressmen were thanked for the United States' support for the development of defense capabilities in the region as Lithuania wants permanent presence of US troops in the region.

Joint security and defense projects as well as support for Ukraine and Georgia's Euro-Atlantic integration were also discussed during the meeting.

Speaking about economic affairs, the Lithuanian prime minister assured the guest that Lithuania is a safe area for American business, stressing the importance of the United States in supplying LNG to the European market. Skvernelis also paid attention to the fact that Lithuania was one of the first European countries to start importing American LNG through the Klaipėda terminal.

The representatives of the Congress thanked Lithuania for its contribution to international operations and leadership in complying with NATO commitments, the Lithuanian government's statement reads.

Six American congressmen are visiting Vilnius on Thursday, led by Kentucky Republican Hal Rogers. They are also meeting with Foreign Minister Linas Linkevicius, representatives of the Seimas and the Ministry of National Defense.

US Congress members to discuss security situation with Lithuanian officials

A US Congress delegation is visiting Lithuania on Thursday for talks with Lithuanian officials on...

Lithuania's chief of defense to pay visit to United States

Chief of Defense of Lithuania Lieutenant General Jonas Vytautas Žukas is leaving of an official...

The Klaipeda Regional Court handed down on Wednesday a seven-year jail sentence to Roman Sesel, a...