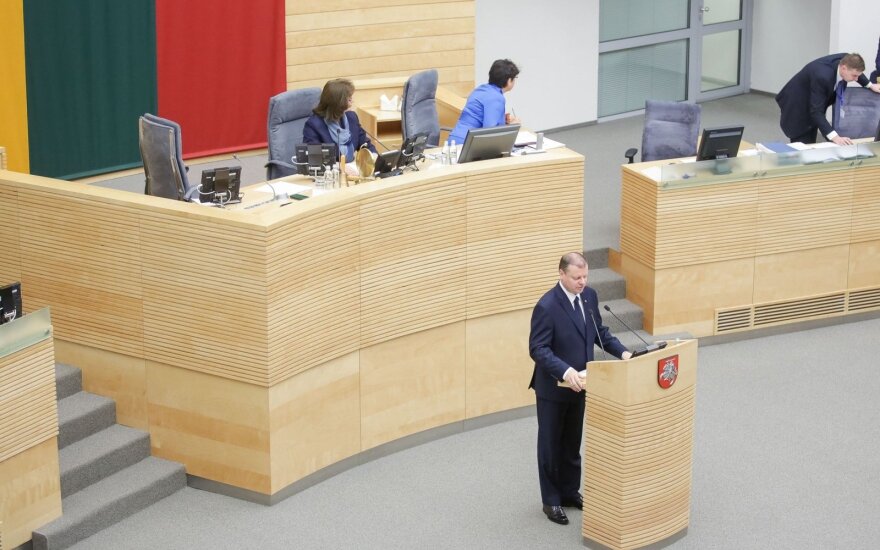 Skvernelis told the Seimas after President Dalia Grybauskaitė presented his candidature that Lithuania has achieved a lot over 26 years of independence, "but despite these achievements, a considerable number of Lithuanians do not feel happy in their country".

"This is evidenced by the scale of suicides, addictions and poverty. The most threatening manifestation of dissatisfaction with life in Lithuania is its low birth rate and mass emigration. Against the background of the present-day geopolitical threats coming from neighbors who are not following democratic standards and international law principles, this situation requires thoroughly weighed and responsible decisions in the governance of our state," he said.

In his speech, the candidate underlined the need for tackling social problems.

Skvernelis promised, among other things, to initiate a program to encourage families to have children, as well as to create a family-friendly tax environment and step up the fight against violence.

The candidate also said that in light of the current geopolitical situation, Lithuania must to beef up its defence capabilities, noting that efforts be made toward introducing universal military conscription in the long term.

Skvernelis reiterated his pledge to seek that the country should meet NATO's 2 percent of GDP target for defense spending in 2018.

"We are saying very clearly that if the situation does not change, 2 percent of GDP is our primary goal. We see all possibilities for further increasing national defense funding," the candidate said.

"Today we cannot afford the luxury of increasing that funding little by little. We must send a message to our partners and states in the region that we take our national defense seriously; we must increase the number of conscripts and ramp up Lithuania's military capabilities," he said.

Skvernelis is to start meetings with the parliament's political groups on Thursday. The Seimas is expected to vote on whether or not to approve him as prime minister next week.

PM candidate to seek 'to reload' relations with Poland

Saulius Skvernelis , the candidate to become Lithuania's next prime minister, sees Poland as a...