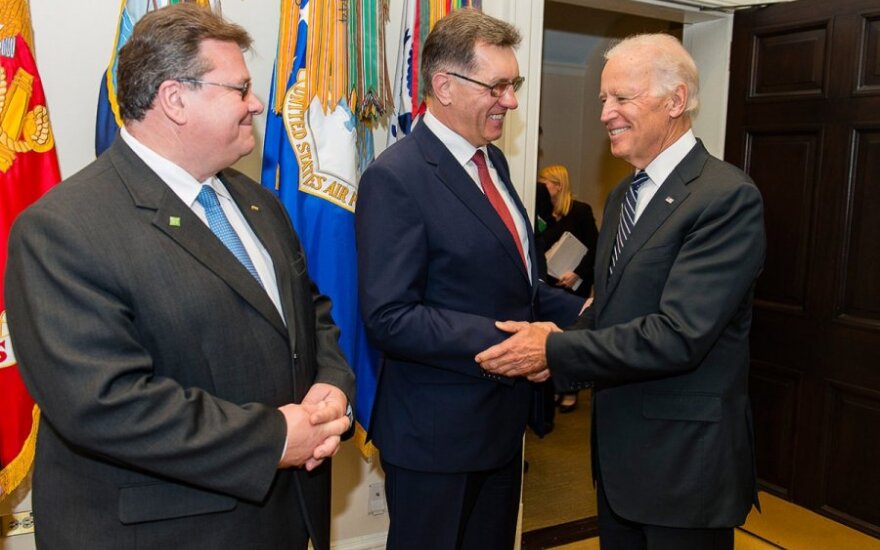 Vice President Joe Biden praised the strong partnership between the United States and Lithuania, particularly with the implementation of NATO’s Readiness Action Plan and the crisis in Ukraine and the European energy security. Vice President Biden stated that the United States’ commitment to NATO’s Article 5 is rock solid, and thanked Lithuania for its leadership within the EU on dealing with the crisis in Ukraine. They also addressed issues relating to the action in the Middle East, particularly with the action of the coalition to degrade and eliminate Islamic State and a range of other matters. The delegation also received strong support from Vice President Biden also strongly supported Lithuania’s membership in the Organization for Economic Cooperation and Development (OECD) upon the completion of its accession roadmap.

Foreign Minister Linas Linkevičius spoke afterwards to the Lithuanian Tribune and confirmed that “all the relevant issues such as security, energy security and trades issues were addressed in a very positive way with the Vice President.” Minister Linkevičius said “the Vice President really appreciates the role of Lithuania in conflict in Ukraine’’. Specific to the illegal annexation of Crimea, the Foreign Minister stated “all diplomatic, political and financial pressure levelled against Russia will continue and that there is no return to normalcy as long as the violation of foreign territory in Crimea, the South Caucasus and possible if there was any further action in Transnistria. The status quo of a frozen conflict is not acceptable.’’

Lithuanian delegation promised continued support for the alliance in Afghanistan and in the fight to degrade ISIS. On the matter of Ukraine, the Foreign Minister said that ‘No new sanctions were discussed, but the existing sanctions will be closely monitored in coordination between the USA and the EU.’’ The USA will assist Lithuania with the fall-out of the sanctions that Russia inflicted on the EU. Within a month’s time the USA will allow the first import of Lithuanian meat to the United States.

The meeting lasted for well over one hour and concluded with Vice President Joe Biden giving Prime Minister Butkevičius, Foreign Minister Linkevičius and the delegation a personal tour underscoring the visibly warm relation between the two leaders.

After the meeting with the Vice President, the Prime Minister met for an hour with the US Secretary of Energy, Dr. Ernest Moniz to discuss energy security matters.

On Saturday, Prime Minister Butkevičius and the delegation will fly to Chicago for a number of meetings with local officials.