the Lithuania Tribune, DELFI
aA
The latest wave of refugees and migrants to Europe has barely touched Lithuania, and only 11 have been relocated to Lithuania out of its total quota of 1,105. However, many people have expressed a number of unclear fears about the migrants and refugees and seem to lack solidarity with Western Europe, which has received the most refugees and migrants, according to Eglė Verseckaitė, a professor at the University of Management and Economics (ISM). 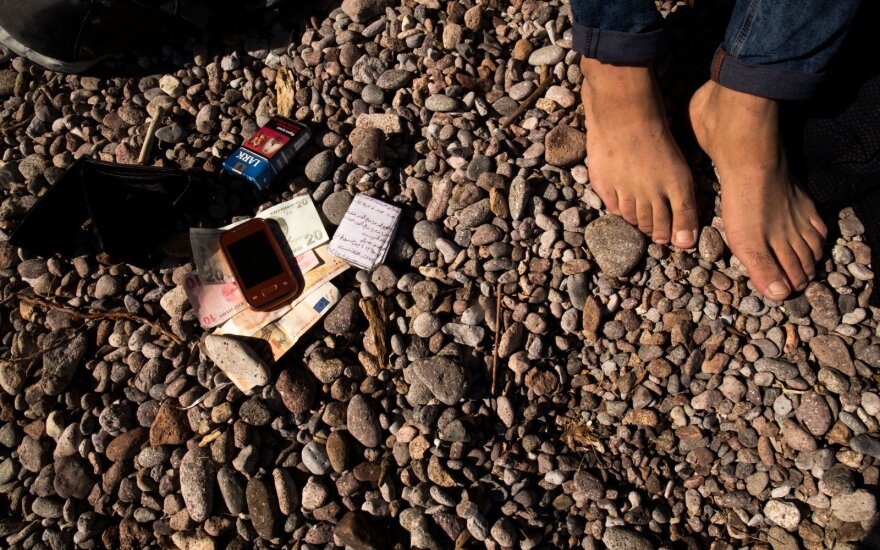 Verseckaitė delivers lectures about the causes of migration, its challenges and its consequences for Lithuania's regions and provincial areas. Last Friday, she delivered a talk to the Seimas European Information Office called “How can we overcome the European Union's crisis?”

Verseckaitė noted that the problem of migration has not changed much – a lack of solidarity, understanding and compassion is characteristic of numerous societies and time periods. The professor pointed out that even on the eve of World War II, a poll performed in the US showed that Americans had a negative view on Jewish migrants, and many were against letting them into the country.

“They said that these aren't real refugees, that they will be mixed up with foreign agents who were bringing foreign ideologies. Does that remind you of something? That's what people said about Jews fleeing Hitler. If Jews running from Hitler aren't real refugees, then who is? People's opinions are always negative and against migration and refugees,” said the professor.

Verseckaitė also said that before the crisis reached its peak – in the spring of 2015 – the Eurobarometer indicated that many people already considered migration to be Europe's biggest problem. She noted that people were inclined to notice not only the factual circumstances, but their own emotions as well. Throughout the world, only 3% of people are migrants, but there seems to be a belief that there are many more migrants – about 10-20%. The statistics have not changed, essentially – it is the same as it was 100 years ago. Some changes were caused by various global economic or political crises.

“We imagine the monster to be much bigger than it is,” said the professor.

However, polls indicate that one in six people want to emigrate but cannot do so. The OECD has indicated that, in its member states, most migrants are familial migrants who move to live with family members who have already migrated, followed by economic migrants in second place and humanitarian migrants fleeing wars or other calamities in third place. Refugees make up approximately one fifth of all migrants and 80-90% of them are beyond the borders of the Western world. 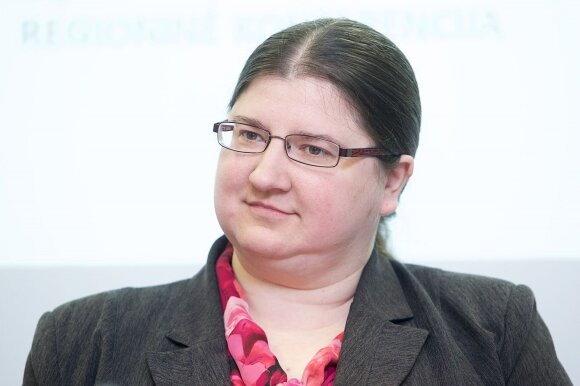 “We are very Eurocentric when we imagine the crisis as some sort of tragedy. Elsewhere, the tragedy is much greater. It's important to remember this and keep it in perspective,” said Verseckaitė.

The birth lottery and the benefits of migrants

There's a question that has unsettled philosophers and scientists who work on the question of migration that Verseckaitė also discussed: Does the fact that we were born in a certain country give us the right to prevent others from joining us in search of a better life?

According to her, the World Bank has calculated that the so-called “birth lottery” is a very significant factor. The location where someone is born defines more than 50% of the opportunities they will have in life. “The fact that we were born somewhere is no merit of ours,” said Verseckaitė.

Many studies have shown that stricter regulations serve to change the form migration takes rather than stopping it, said Verseckaitė. If fewer people are allowed to enter legally, more will enter illegally. She mentioned Great Britain as an example – when the rules for gaining refugee status were tightened, the country experienced a spike in foreign students. People will look for ways to gain access to a better life.

Another interesting example she cited when it comes to differences in how refugees are treated was the US and the EU. In the EU, restrictions are applied until an individual receives their refugee status, and they cannot work or perform other tasks. In the US, this time period is much shorter, which Verseckaitė believes is the reason why migrants in the US experience a much better integration process.

“A lot depend on what a state's rules are. Are they provided with the conditions needed to work and integrate, or, to but it crudely, are people held in pens with the hope that they will be gotten rid of, that they won't put down roots and integrate. It would be better for everyone if there was more freedom for economic migrants to arrive with conditions for economic migrants. Unfortunately, this isn't happening,” said Verseckaitė.

“Young, working migrants are most beneficial for the economy. The most expensive people for the state are schoolchildren, not migrants. If the person arriving is educated, even if he is a blue-collar worker, he brings more benefits to the state than it will cost it,” the professor said.

She said it was to be expected, however, that society's opinion of migrants was always negative, because people tended to lump legal and illegal migrants into one large group and were ruled by the fear of economic and cultural competition. 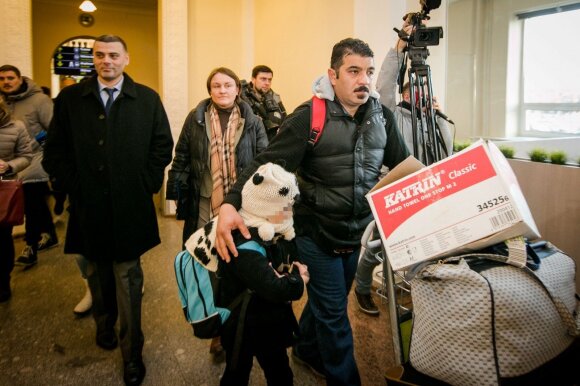 “People who feel like lords in their own countries feel a certain existential fear – my culture will no longer be the dominating one and I will have to adapt to other cultures,” said Verseckaitė. She said that Europeans wanted perfect immigrants – people who would totally adapt to their countries, assimilate, accept the language and the culture, arrive with job offers in hand and wouldn't break the law. In other words, perfect citizens.

Verseckaitė also noted that countries' opposition to migration was inversely proportional to the experiences they've had with migration. The fewer migrants a country has had, the more hostile it is to the idea of receiving migrants. This is the case with Central and Eastern European countries.

One of the most important factors deciding people's opinions on migration was education. The more educated someone is, the more tolerant they are. Research has shown that education allows a person to resist the fear of competition with migrants, widens a person's perspective, and encourages them to think more openly.

The role of the media is also important – many people have never seen a migrant but have already formed opinions from stories they've seen in the press, populist statements about refugees, etc. Political statements in the press take the place of real refugees' voices.

However, Verseckaitė said that the most important element is the quality of contact with migrants. The first question is whether or not a person has ever come into contact with a migrant. If so, what was the experience like? If a person never comes into contact with different people, they may remain rather tolerant.

The professor pointed out that some of US President Barack Obama's greatest voter percentages came from white, wealthy areas full of people of European ancestry. However, if the contact between “different” people is superficial, these fears can quickly grow. Seeing someone who looks different in the street or being unable to have a conversation with someone are just some of the experiences that can intensify these fears, said Verseckaitė.

The Lithuanian city of Alytus has about 60 foreign students from countries other than Europe. One student from Alytus told the professor that Alytus residents were afraid of the immigrants. When asked why, the student said, “because they stand around by the store and smoke.” This strange explanation confirmed to Verseckaitė that a person who looks different simply raises unfounded fears. “I spoke to those students. They truly feel that unfavourable attitude towards them, that they are looked at as exotic objects,” she said.

When quality relationships can be formed with migrants – especially when studying or working together – the level of tolerance increases. “To put it simply, you then see that they're just people too. The fear is significantly reduced and the tolerance increases,” said Verseckaitė.

The professor said she saw a lack of EU solidarity in solving the refugee crisis. She noticed that Eastern European countries usually did not want to shoulder any burdens because they did not feel responsible for crises that occurred in Africa or the Middle East, where many countries had once been European colonies. She said that the complaints were sound, in part, since modern crises are sometimes significantly related to historic colonial processes.

“Let's keep in mind that Europe divided Africa's map with a ruler and moulded Syria from six different groups – a state that perhaps never should have existed. They are reaping what they sow, so what do we have to do with it?” said the professor, summarizing many Central and Eastern European countries' rhetoric. However, she said that the EU must operate on the basis of compromise and shared responsibility. In return for receiving ES structural funds or other forms of support and guarantees of their safety, Lithuania and other Eastern and Central European states had to take on part of the burden.

Verseckaitė pointed out that Lithuania and other post-Soviet countries often emphasized the damage done to them by the Soviet Union and what the Western world owed to them, but when other countries mentioned their historical wounds, we do not want to listen.

“People often complain about refugees and how they don't defend their countries. Perhaps someone living in Syria, which was moulded from British and French protectorates, doesn't feel completely loyal to that state. Is this their country if it was created artificially? It would be like Lithuanians defending the Soviet Union. There were some who were forced to defend it in World War II, but they felt no moral responsibility to do so,” said Verseckaitė.