BNS EN
aA
The Lithuanian Peasant and Green Union (LPGU) sticks to the idea of forming a broad coalition of three parties after Tuesday's consultations with the Homeland Union–Lithuanian Christian Democrats, but the conservatives say they will not work together with the Social Democrats and want the Liberal Movement brought in. 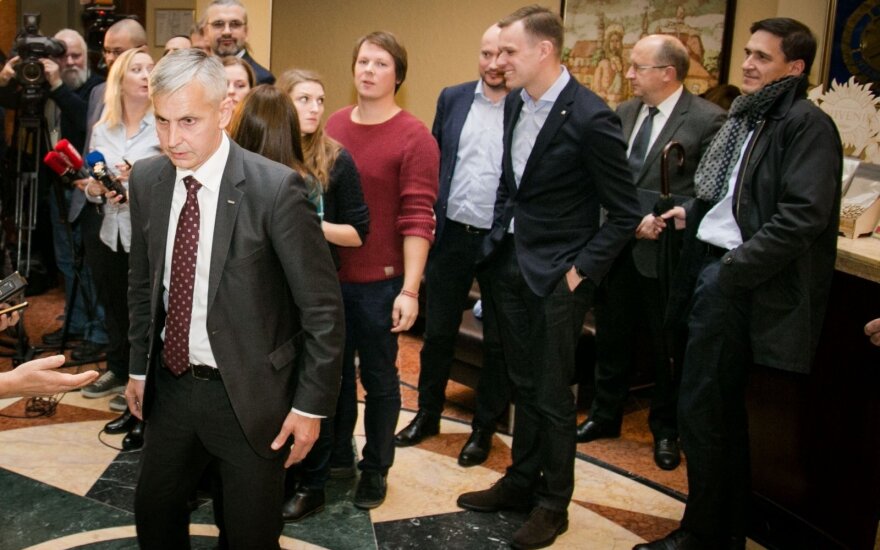 "From the very beginning, we have said that we find both the conservatives and the Social Democrats acceptable as partners, because our aim is to form a national unity government, given the problems in our state," Povilas Urbšys, coordinator of a negotiating group set up by the LPGU, told reporters after consultations with the Homeland Union.

However, the conservatives question the idea of a national unity government and refuse to work in a coalition with the Social Democrats, Urbšys said.

"Second, one of their (conservatives) conditions is that we turn to the Liberals as another potential coalition partner," he said.

Additionally, the conservatives demand that all persons who will participate in the signing of a coalition agreement should be vetted by special services, Gabrielius Landsbergis, the Homeland Union's leader, told reporters.

"Persons who will sign the future coalition agreement must be screened by the State Security Department. That's what we are asking. This is our position. Because we believe that a person who holds the post of prime minister or Seimas speaker or works on the National Security and Defence Committee are screened before they are given access to classified information," he said when asked if this was a special condition for LPGU Chairman Ramunas Karbauskis.

The LPGU negotiating team plans to meet with the Social Democrats in the afternoon.

The Peasants and Greens won 56 seats in the 141-member Seimas. The Homeland Union came in second with 31 seats and the Social Democratic Party finished third with 17 seats.

The Lithuanian Peasant and Green Union (LPGU), which is set to lead the next coalition government...

The Lithuanian Peasant and Green Union continues drawing the red lines after the second round of...