LT Daily, Media Briefing
aA
The Lithuanian Peasant and Greens Union (LVŽS) and Lithuanian Social Democrat Party (LSDP) leaders have signed the coalition treaty today. As agreed earlier, the LVŽS will delegate its representatives to the two highest posts after the President – those of Prime Minister and Seimas Speaker. 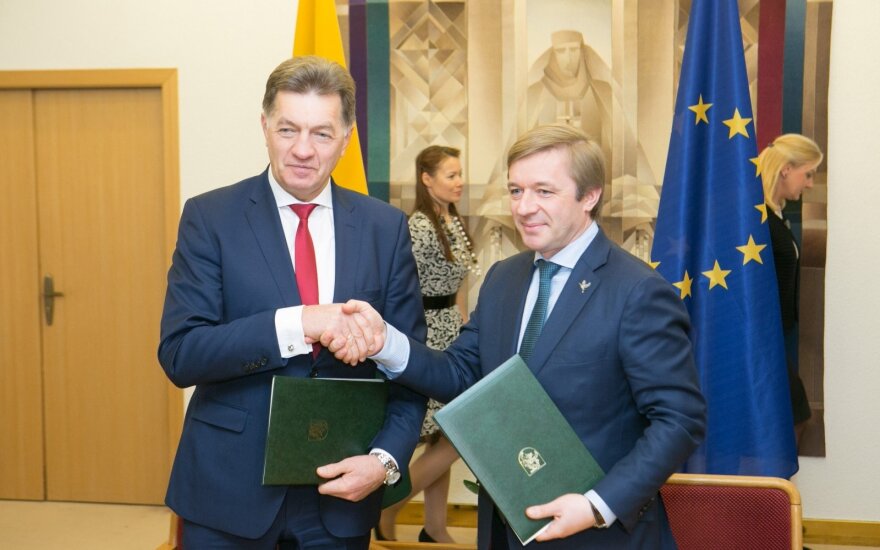 After signing of the coalition treaty
© DELFI / Andrius Ufartas

Saulius Skvernelis is to lead the cabinet, and the seat of Seimas Speaker will be offerd to Viktoras Pranckietis, an academic. Beyond that the “Peasants” will be in charge of 11 ministries, while the SocDems will be responsible for 3.

The Social democrats will be in charge of the ministries of foreign affairs, justice and economy.

According to Alfa.lt sources the Social Democrats intend to suggest the Jonava Mayor Mindaugas Sinkevičius, who is viewed as a member of the young generation of Social Democrats.

Ministry swap due to candidates

He did not identify the candidates who could take the post of Minister of Economy. According to the leader of the SocDems, they will have to have internal discussions with party members on this matter.
A. Butkevičius also noted that his party will not propose their candidates to ministries that will be left to the “Peasants”.

Specified where opinions may differ

“I would point out that it’s goodwill. Beyond that it is hearing one another and further, I hope, working hard together every day. Hard work, but important for Lithuania,” R. Karbauskis described the post-negotiation atmosphere in regard to interacting with the SocDems.

The “Peasant” leader hinted that the coalition agreement will also not include the question of moving the ministries of environment and agriculture to Kaunas, but his party will seek to do this.

A. Butkevičius noted that the key tasks for the coalition will become clear and will be presented to the public when the PM is inaugurated.

“I believe that the ministers will be involved in improving the programme because in the Seimas, the ratification of the programme is done along with the final inauguration of the Prime Minister, so I think that speaking of it is still too early,” the incumbent PM said.

Unclear which minister will stay in charge

The Peasant Greens leader R. Karbauskis has earlier stated that his party intends to merge the ministries of energy and economy. So which minister, a SocDem or “Peasant” will continue to lead the Ministry of Economy post-merger?

“We have not discussed such details. Simply put, the new Minister of Energy will know well enough that the ministry either needs to be liquidated or merged, however you want to call it. As for how it will be integrated – on the level of departments or some other level, what position will go to the Minister of Energy – that is something not worth discussing at this very moment. This is a structural change, it will be left to the PM and cabinet to decide on,” Karbauskis was unwilling to give a conclusive answer.

“No sitting on two seats” rule

The “Peasant” leader has stated the LVŽS fraction will be comprised of around 60 members in Seimas. Karbauskis has denied earlier rumours that two of the Labour representatives who managed to enter Seimas will work in the “Peasant” fraction.

“There isn’t a single Labour Party member in our fraction, I don’t know, haven’t heard of this being the case. That information is incorrect,” he said.

The LVŽS chairman has earlier hinted about a rule that the LVŽS representatives who become ministers will have to relinquish their mandate in Seimas, if they were elected through the multi-mandate electoral district. When asked if he intends to uphold this rule, he was not conclusive, stating that “This is an internal question for our fraction and we will endeavour to decide in a way that will truly hold to our commitments,” and added that constitutional changes are needed that would ensure that it is not possible to be both a member of Seimas and a minister at the same time.

Meanwhile the SocDem leader A. Butkevičius stated that his party will not employ such a “no sitting on two seats” rule. “We are not discussing such a question. If we delegate a member of Seimas (as a minister – Alfa.lt), then he will retain his status as member of Seimas,” noted Butkevičius.

The Lithuanian Social Democrat Party (LSDP) Chairman Algirdas Butkevičius claims that in their...