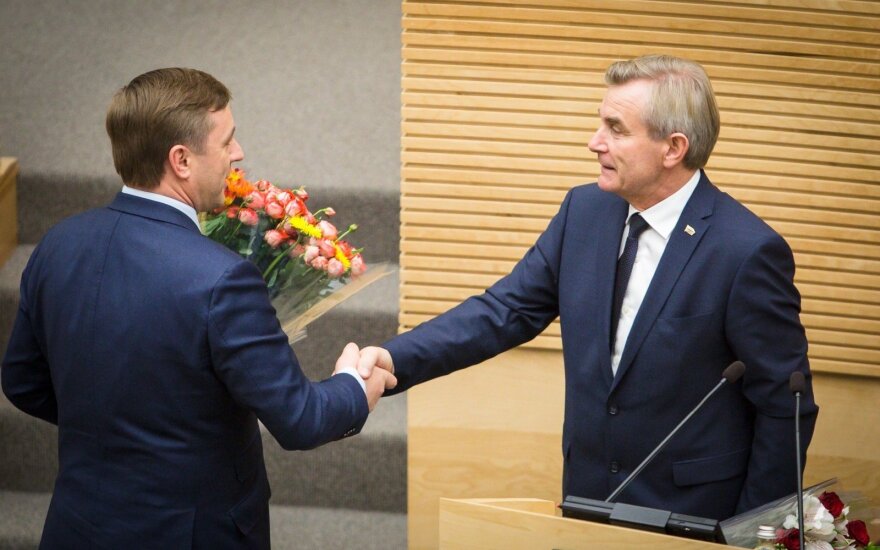 In a secret ballot, the candidate was supported by 93 of the country's 141 lawmakers, while his opponent Eugenijus Gentvilas of the Liberal Movement secured 36 votes. Eleven ballots were damaged.

"93 is nearly a constitutional majority. We are close to the limit that says a significant lot about the result, I thank you all," said Pranckietis, 58.

He expressed hope that his academic experience and skills will benefit him in the crucial post, urging the parliamentarians to forget the election battle, the bitterness of defeats and the euphoria of victories before starting to work.

"I come from a bright, advanced and tolerant academic community, therefore, I will do my best to bring the best academic provisions: culture of dialogue, culture of argumentation, listening, hearing, aim to understand, constructive discussion, respect to a different opinion, dignified, pleasant and ethical communication. I believe that arrogance and cynicism, indifference, self-centered attitude or aim for privileges are incompatible with the status of elected citizens," said the new Seimas speaker.

Pranckietis pledged to take personal responsibility for the work done by the parliament.

"I see the duty of the Seimas speaker not only as an immense honor but, first of all, as difficult and determined work for the benefit of Lithuania and personal responsibility for positive outcome of the work," he added.

On Monday, he suspended his membership in the political group of the Lithuanian Peasant and Green Union. Under the Seimas statute, the speaker cannot be a member of a political group.

Born in Ruteliai village in northern Lithuania in 1958, Pranckietis attended the Tytuvėnai Secondary School, the Tytuvenai Soviet Farming School and worked as an agronomist at the garden. In 1977–1982, he enrolled in the Lithuanian Agricultural Academy and graduated with a scientific degree in agronomy. In 1984–1986, he served in the Soviet army and started working as an assistant at the academy after his return to later make a career here. He was the dean of the Aleksandras Stulginskis University's Agronomy Faculty prior to his election to the parliament.

In 1998, he defended his doctoral dissertation in the field of biomedical sciences and is currently a professor.

He specified being engaged in farming activities since 1999, with gardening being his main activity. Pranckietis was elected to the Kaunas District Municipal Council in 2015.

On the new Seimas Speaker