BNS EN
aA
A three-party coalition should be set up after the parliamentary elections, says Gabrielius Landsbergis, the leader of the conservative Homeland Union – Lithuanian Christian Democrats, noting that one of the potential coalition partners, the Peasant and Green Union, lacks consistency. 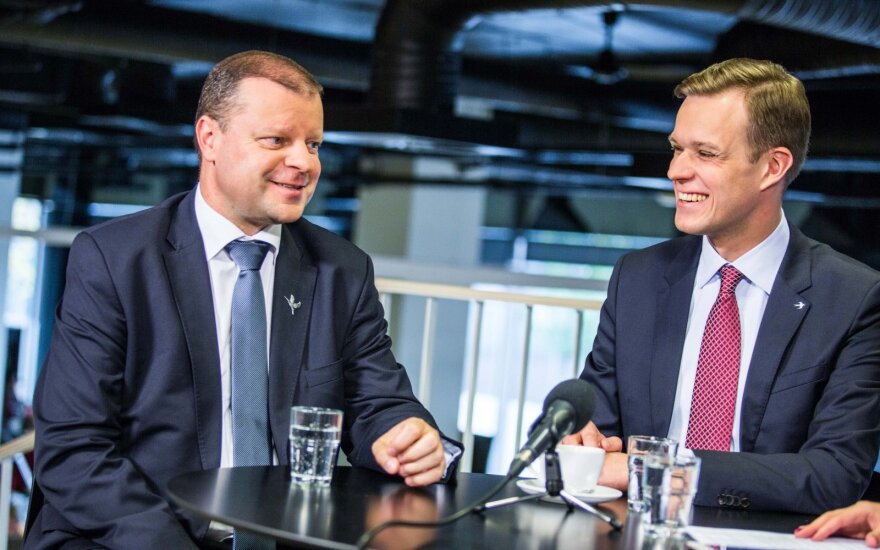 "It is locked in some desperate wavering, it seems to me that the things we are seeing now is major panic about what the situation will be after the elections. Virtually every day we see new requirements and new red lines. It is becoming even difficult to follow who else they do not want to see in the new government, what other new ideas the Peasant and Green Union will bring to the still future table of negotiations," Landsbergis told Žinių Radijas news on Friday.

"I heard during the debates yesterday about new capital taxes, presence of the (Electoral Action of) Poles in the coalition and a number of other things – they are creating real-time. It seems to me that one program was written a while ago, and a new program is being written now. As a matter of fact, I cannot imagine how the party sees itself in negotiations," said the conservatives' leader.

He also said that conversations with Saulius Skvernelis, number one candidate on the Peasant and Green Union's list, give an impression of him being willing to negotiate. In Landsbergis' words, his attitude is clearly different from that of the party's leader Ramūnas Karbauskis.

Landsbergis said he would want to have a coalition of the conservatives, the Peasant and Green Union and the Liberal Movement. Karbauskis has said he could not imagine the Liberals in the future coalition.

Karbauskis told BNS on Friday that the Peasant and Green Union was a unified party, saying that it was the conservative party that was wavering and desperate.

"In an attempt today to compensate yesterday's full fiasco, he is starting to talk about something wrong with us. Everything is fine with us, you would not find a single MP or our members who have been elected or are still running in the 2nd round who would say they had a single doubt in our unity or our values," said Karbauskis, meaning the Thursday's election debates on the national television LRT.

The conservatives won the highest number of mandates in the 1st round of the parliamentary elections two weeks ago, just ahead of the Lithuanian Peasant and Green Union.

The 2nd round of elections is scheduled for Sunday.

Early voting starts in 2nd round of Seimas elections

Early voting is starting on Wednesday in municipalities and special post offices in the 2nd round of...

With more than a half of votes counted, the Lithuanian Peasant and Green Union was leading by a...

Landsbergis apologizes for poor conservatives' results but plans to stay on