BNS
aA
The Palestinians hope to have their representation in Vilnius in two years and are asking Lithuania for assistance in allocating premises for such an office. 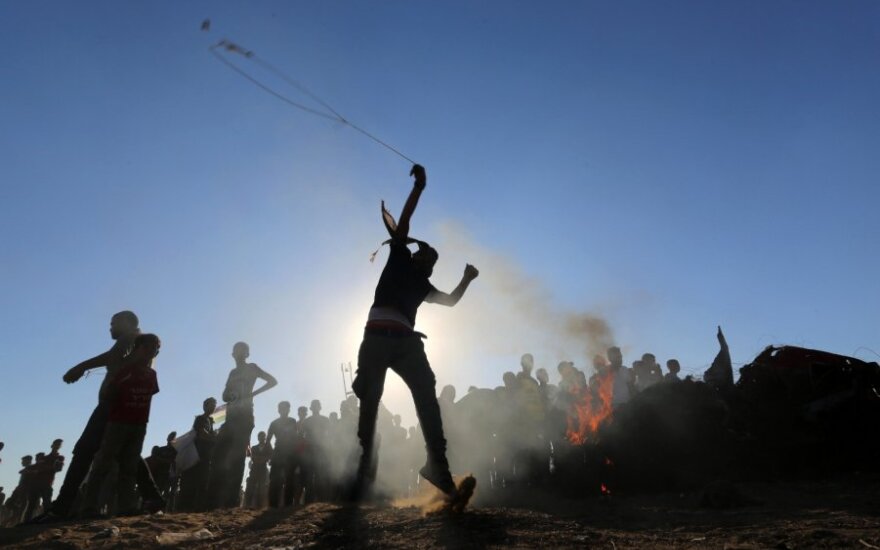 "The plan is still to have a mission in Vilnius, but the resources are not available," Palestinian Vice Minister of Foreign Affairs Amal Jadou said in an interview with BNS Lithuania.

The Palestinian diplomat raised the issue during a meeting with Lithuanian Vice Minister of Foreign Affairs Darius Skusevicius last week, and also says there are plans to ask the Vilnius authorities for assistance.

"Usually what Palestine gets from receiving countries is support, sometimes in the format of providing a building or helping with the cost management to start an office," Jadou said, also telling BNS Lithuania that the representation would be opened over the next two years.

The Palestinians voiced their plans to open their mission in Lithuania back in 2013 but such a representation has not been opened yet.

Lithuania has not recognized Palestine's statehood, therefore, a Palestinian representation would have a lower status than an embassy, and would probably be called Palestine's office for relations with Lithuania.

Lithuania has an office in Ramallah since 2013.

Jadou visited Vilnius and Kaunas and says she's grateful to the Lithuanian government for sticking to the EU's common position on the Israeli-Palestinian conflict but also asked for a tougher response to Israeli Prime Minister Benjaminas Netanyahu's plans to annex the Jordan Valley in the West Bank.

According to Jadou, such a move would bury hopes for the two-state solution, the co-existence of Israel and Palestine. The diplomat also said there's a growing position among the Palestinians two change tactics and move to a civil rights movement, instead of demanding statehood.

"If Israel really wants to stay as Israel, then it will have to accept a state of Palestine. But if Israel is not interested in that, then we are moving into an apartheid regime first, then we are moving into a civil rights movement where the majority of the Palestinians will ask for their rights because we cannot live as third- or fourth-class citizens in a country and we cannot continue to be persecuted and subjugated if we are a majority," Jadou said.

"And then eventually maybe in ten years or in 15 years we are going to have a president of that country, no matter what the name of the country will be then, by the name of Muhammed. Who would have imagined some years ago that the president of the United States would be an African-American? But it happened….," she said.

In her words, US President Donald Trump has taken a very pro-Israeli stance in recent years, and the Palestinians want more countries, perhaps including the European Union, United nations, Russia, China or perhaps some Arab countries, to act as intermediaries in the negotiations.

The Jordan Valley covered two-thirds of the West Bank's territory, and Israel's right-wing politicians view it as a strategic area of their country which it has no plans to ever withdraw.

The issue of Palestine 's representation in the Baltic states was first raised more than three years...

Lithuania wants closer ties with Israel but also calls on Israel to stop the expansion of Jewish...