BNS EN
aA
Gintautas Kevišas on Thursday rejected calls from Lithuania's leaders to step down as director of the National Opera and Ballet Theater (LNOBT). Here is a look at some top management replacements at state-owned companies and public bodies following last October's parliamentary elections. 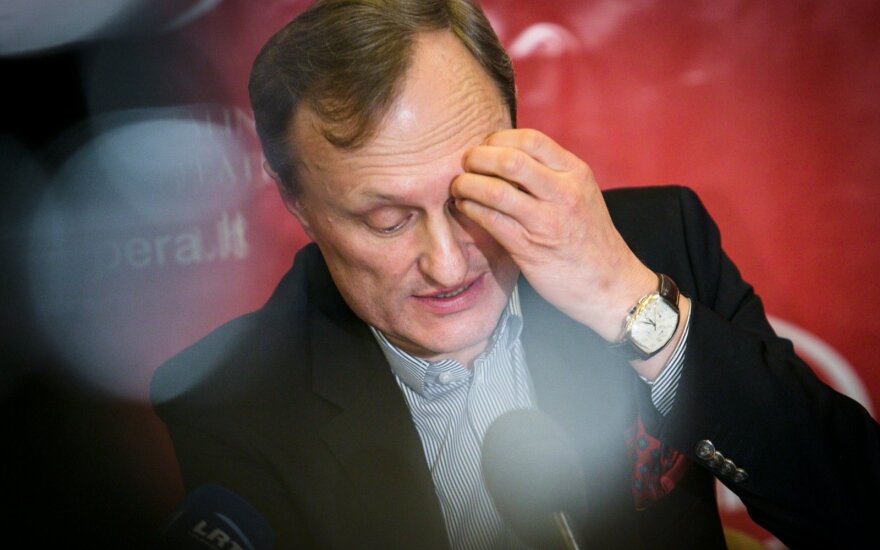 Lietuvos Geležinkeliai (Lithuanian Railways) CEO Stasys Dailydka in early December announced his resignation from the post he had held for a decade, citing a lack of political support and pressure from "certain groups". The state railway company had come under criticism for non-transparent internal transactions and aid allocation practices.

Dainoras Bradauskas, head of the State Tax Inspectorate (STI), was sacked on Jan. 20 by Finance Minister Vilius Šapoka, who said that, based on law-enforcement information, the director in 2015 informed MG Baltic Vice-president Raimondas Kurlianskis about the course of tax investigations of MG Baltic and Vilniaus Prekyba, another major business group.

Algimantas Rasčius, CEO of Oro Navigacija (Air Navigation) since 2001, was fired on Feb. 2 by Transport Minister Rokas Masiulis, who said that the state-owned air navigation service provider's activities had repeatedly raised doubts about possible corruption and that the director had ignored criticism over possibly non-transparent public procurement practices.

Jurgita Kazlauskienė, director of the Lithuanian State Tourism Department, tendered her resignation to Economy Minister Mindaugas Sinkevičius on Feb. 10 amid criticism over the use of photographs taken abroad to promote Lithuania in a state-funded campaign. Kazlauskienė said that her decision to step down was also due to "events of the past few months," but she gave no details.

Kėstutis Sabaliauskas, head of the Center of Registers, informed Justice Minister Milda Vainiutė on Feb. 20 that he was leaving the post he had held for 20 years. There was no public explanation of his resignation, which came after an auditors' report that the center was inefficiently managing its finances.

Darius Didžgalvis, acting CEO of the state data communication network services company Infostruktura, also announced his resignation on Feb. 20, a month after the Transport Ministry said that it would look into information about possible non-transparent public procurement, but insisted that his decision had nothing to do with the audit.

Laura Nalivaikienė, director of the State Territorial Planning and Construction Inspectorate, said in late February that she was resigning from post she had held since 2001 to take up a job offer in the private sector.

Daivis Zabulionis, deputy director of the Lithuanian Road Administration, was sacked by Transport Minister Rokas Masiulis on Mar. 6 based on information from the Special Investigation Service on his suspected non-transparent ties to MG Baltic's Kurlianskis and a former CEO of the road and bridge construction company Kauno Tiltai.

Romas Valentukevičius stepped down as head of the Chief Official Ethics Commission amid criticism of politicizing the ethics watchdog. The Seimas accepted his resignation on Mar. 14. Viktoras Pranckietis, the speaker of the parliament, said that the commission had discredited its reputation.

Rolandas Černiauskas, the head of CPO LT, Lithuania's central purchasing body, on Mar. 17 was fired by Economy Minister Mindaugas Sinkevicius, who cited irregularities and shortcomings revealed during inspections carried out by the Public Procurement Office as the reason.

Algirdas Kunčinas, director of the State Data Protection Inspectorate, informed Justice Minister Milda Vainiutė on Mar. 17 that he was stepping down from the post he had held for a decade, citing personal reasons and plans to retire.

Danielius Kuprys, director of the National Land Service, looks likely to lose his job soon after Agriculture Minister Bronius Markauskas said on Mar. 15 that he had no confidence in the official. Kuprys refuses to step down, but the minister says that the director will be sacked following the service's reorganization.