BNS
aA
Three opposition political groups in the Lithuanian parliament have invited Prime Minister Saulius Skvernelis and Government Chancellor Algirdas Stončaitis to their joint meeting on Thursday to clarify the circumstances under which the audio recording of a Cabinet meeting on giving the media free access to registry data was deleted. 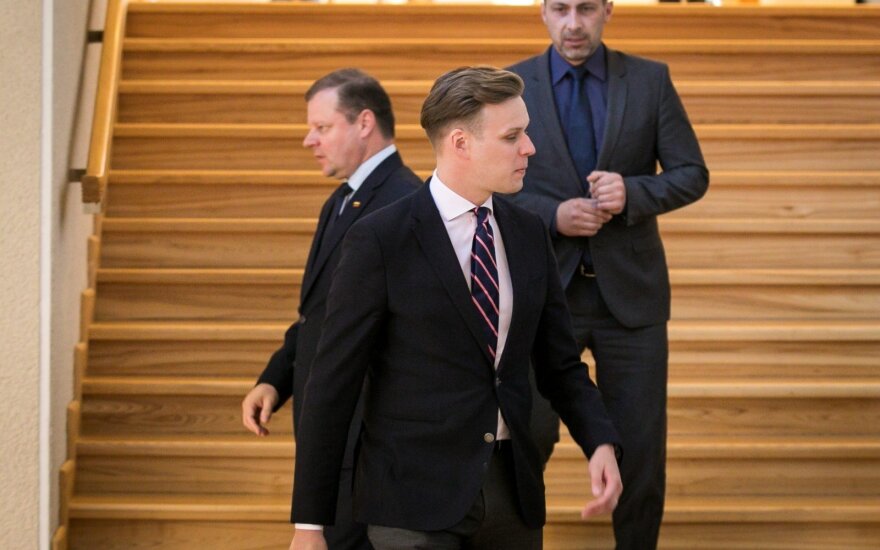 Opposition lawmakers say they are not satisfied with the explanations Skvernelis gave at a plenary meeting on Tuesday.

"The answers given at yesterday's sitting were not acceptable. We think the prime minister should clarify the information," Gabrielius Landsbergis, leader of the Homeland Union–Lithuanian Christian Democrats (TS-LKD), said after Wednesday's meeting of the heads of the political groups of the TS-LKD, the Liberal Movement and Lithuanian Social Democratic Party (LSDP).

Related articles
R. Sotvarė-Šemetienė. The government tosses a chewed on bone to the media
PM calls for careful evaluation of decisions to support privately-owned companies

"We want to know both the technical details and the prime minister's political assessment of his decision to tell an untruth before the Seimas yesterday," he added.

According to Landsbergis, Skvernelis lied when he said that "the government office’s rules of procedure do not apply to him as the prime minister".

Eugenijus Gentvilas, leader of the Liberal Movement, said an interpellation procedure against Skvernelis could be launched if it turned out that the prime minister had lied.

At the October 3 meeting, the Cabinet discussed reopening free access to registry data for the media, but put off its decision on the matter. Journalists demanded that the audio recording of the meeting be made public, but it turned that it had been destroyed.

Skvernelis was summoned to the Seimas on Tuesday to answer written questions from parliamentarians regarding the recording.