Opinion: Victory for Putin in Ukraine and against the West

(1)
Vykintas Pugačiauskas,
www.lrt.lt
aA
The Russian president has scored a victory in Ukraine and against the West. Vladimir Putin has got more than he hoped for, and yet there’s still a lot more that he can win. The game has now become long-term and one in which the most important thing will be strategic patience. And it’s not clear if Russia has the upper here. 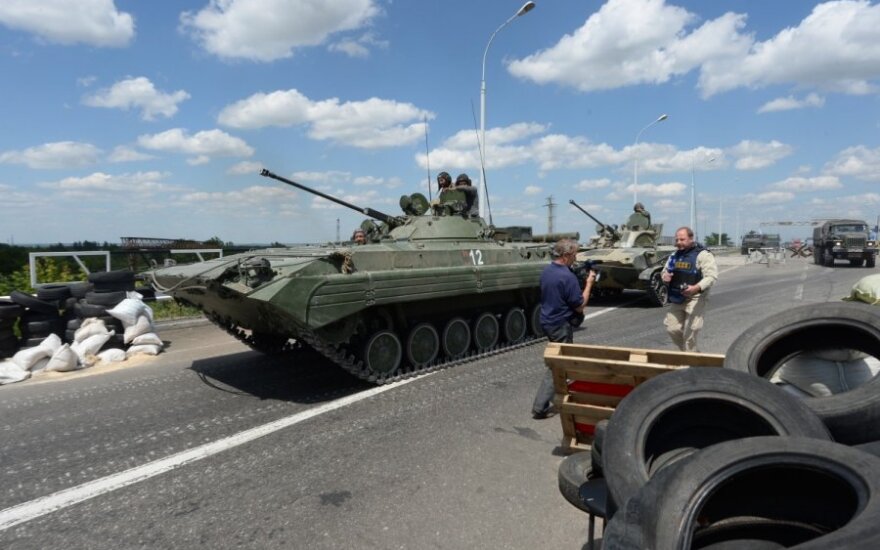 The victories of Russia’s armed forces in Ukraine at the end of September crowned Moscow’s mid-year glories. Impeded Ukrainian troops will in all likelihood lose another strategic facility, not daring to brazenly violate the cease fire as units of the Russian separatists have. The conflict though has already frozen, just as planned by the Kremlin eight years ago.

The fact is that one year ago the unimaginable worst scenario is now the grim truth.
Having lost thousands of its citizens, Ukraine is dividing its own territory into a buffer zone. Its government is pleased now that it has “stabilised” the front line defends the ceasefire which is essentially better than war. This nevertheless only compounds Kiev’s powerlessness in the face of Moscow’s actions.

The Crimea is lost and nobody no longer holds out any hope of regaining it.

Kiev itself is asking for a halt to the Association Agreement with the European Union only this time it’s not in exchange for a fifteen billion-dollar loan, as was the case with the president who fled, but for Russia’s fragile promise that it will not take punitive measures.

Initially, the price of gas was increased two-fold, the cynical justification of which was that Ukraine can no longer give a discount, when Ukraine can no longer supply Russian ships at the port of Sevastopol. Thereafter the gas supply was cut off completely. With the approach of winter the European Union imposes an agreement acceptable to Kiev, one according to which Ukraine is to pay not twice but one and a half times more than it can. A stab in the back came from Hungary which succumbed to Russia’s blackmail not to resell at a cheaper rate “Gazprom”-supplied gas.

The economy is on downturn and it’s clear now that agreed upon loans from the International Monetary Fund loans are woefully insufficient, and that’s if Kiev can show that it is worthy of them.

The society has been numbed by war and has become even more fragmented and disillusioned. Some of it has become radicalized. Almost one year since the Maidan has been lost; corruption is thriving more than ever (with the war it’s become even cynical); reforms have hardly been initiated. Many of the leaders are incompetent. The media, instead of becoming stronger, more often than not spreads Ukrainian propaganda which seen as an appropriate answer to Moscow’s propaganda.

The president and prime minister cannot agree if they really want to be a part of NATO. Lithuania, which consistently defended Ukraine in the European Union has only just now found out from the press that its work of many years has been thrown out by the president who has asked that the Association Agreement be postponed. “We cannot be bigger Ukrainian patriots than the Ukrainians themselves” is the conviction now expressed by Kiev’s former champions.

The international picture is even gloomier.

All fundamental international agreements endorsed by Europe have been ripped up with nobody in the West being able to secure them.

Russia has shown that it can it can effectively mobilise all its needed resources – from thugs for whom medieval torture is routine to propaganda that barefacedly paints another truth which incites the population. From oligarchs, scared that the usual silence of loyalty to business no longer suffices and who intrude with approval into the public space, to the central bank that finances well the government’s folly.

The Russian army is rapidly catching up with NATO and the “hybrid war” is several steps ahead of the West’s ability to respond.

The European Union which already a few months ago explained that there will not be a new Molotov and Ribbentrop pact is now not only discussing with Russia its disgruntlement with the Association Agreement, it’s actually giving the option of changing it, already ratified, to suit Moscow’s liking. In the meantime a coalition of Russia’s business partners are now urging that the sanctions that took six months to introduce, be lessened despite the fact that the situation is actually getting worse.

NATO admitted that it was powerless to defend its allies timeously and in the way it should have and that it dithered lest it provoke Russia into going all the way. Confronted with war the Alliance’s main weapon has been deterrence and which has undermined to the extent that Moscow can be tempted to ruin NATO by showing that the allies are “not prepared to die for the Narva”.

Commitments for a duly financed defense were identified in Wales for the first time but just as vague goals.

In parallel, in the universe of the Kremlin’s leaders, America is to blame for all of Russia’s woes and which in reality just trying as much as possible to withdraw from the greatest security challenge in Europe. The president is taking the correct steps and says the right things but shows no leadership neither with Ukraine nor with any foreign policy issue.

The West is generously supplying weapons to groups in Iraq and Syria but openly supplies weapons to Ukraine after it participated in all NATO operations. A Taboo.
So many changes in one year as slow as they are far too many. They will however slow down from now on and the equilibrium will revert to a long-term game.

Although often accused of pragmatism, Russia for the time being is actually taking preventative action. It started a war to block Kiev’s road to choose drawing closer to the West. And now Moscow is openly declaring, even from a United Nations rostrum, that Ukraine must remain a neutral country, a “buffer zone”, and if it agrees with this the war will stop. It has most of the required leverage to effectively blackmail Kiev.

For all the practical steps taken by Petro Poroshenko, it doesn’t look as he is questioning this state of affairs imposed by Moscow. Barring any sudden upheavals, everybody will just have to live with it at least for the time being. Bearing in mind that Ukraine will not suddenly find the determination to start internal reforms, it will take a long time for it to become robust.

On the other hand, Russia too will need a lot of time if it conceives of moving further west and redrawing NATO’s and the European Union’s boundaries, for example in the Baltic States. That would be a truly pragmatic step and not just an available opportunity in Ukraine to use to achieve its aims. This would cost Russia dearly, at least in the near future.

Russia’s isolation is now starting to be felt. This could increase the people’s passion to a level of Germany’s in the 1930s. Still, judging from steps taken by the Kremlin to moderate propaganda ardor, it is more probable that once it reached its most important and closest foreign policy goal, Moscow will for at least a certain time settle down.

It’s plain to see that Mr. Putin has the strategic patience to play a long-term game. The most important question here though is does the West? On one hand the West could break up and in its weakness turn attention to other problems. On the other, no matter how hopelessly sluggish the awareness of Europe’s major capital cities may be, even the major champions for a return to good relations with Russia cannot ignore the fundamental changes it has triggered in Europe.

The tectonic plates have shifted and as they clash there will no doubt be friction. Occurrences like seizing ships, abductions by security agents and violations of air space will increase. A perfidious Russia is and will be the main threat to NATO. However, if Russia shows muscle only but goes no further, the long-term tension that holds sway will no longer be too bad for Lithuania – that is if it can just manage to stick to maintaining a forceful but wise line in the European Union and NATO. At the same time Lithuania must be able to strengthen its internal institutions, first and foremost defense, so that it does not present Russia with a similar opportunity like Ukraine, and improve integration with the West (Lithuania will at least no longer have to prove it was paranoiac towards Russia and will certainly be possible to demand solidarity).

A long-term game opens up a lot of opportunities for big politics and lessens the need to react quickly to Russia’s actions, something the West has not managed to do. Securing a vigorous and united policy on fundamental issues and ensuring effective deterrence will be the most important challenges. There are however already questions as to how the West is to resolve things within its own community. In the long term, the West’s resilient societies with centuries of developed values and its strength of economy should be sufficient support for Lithuania.

The West has not managed to help Ukraine and in all likelihood attempts will have to be put off before starting again. They now have to prepare themselves in earnest for a long winter.