Ludo Segers
It is often said that politicians make for strange bedfellows. Moreover, people are judged by the friends or partners they have in life. In that light, one really should question Rolandas Paksas’ judgement when he invited UKIP’s Nigel Farage to his Order and Justice party congress in Vilnius. 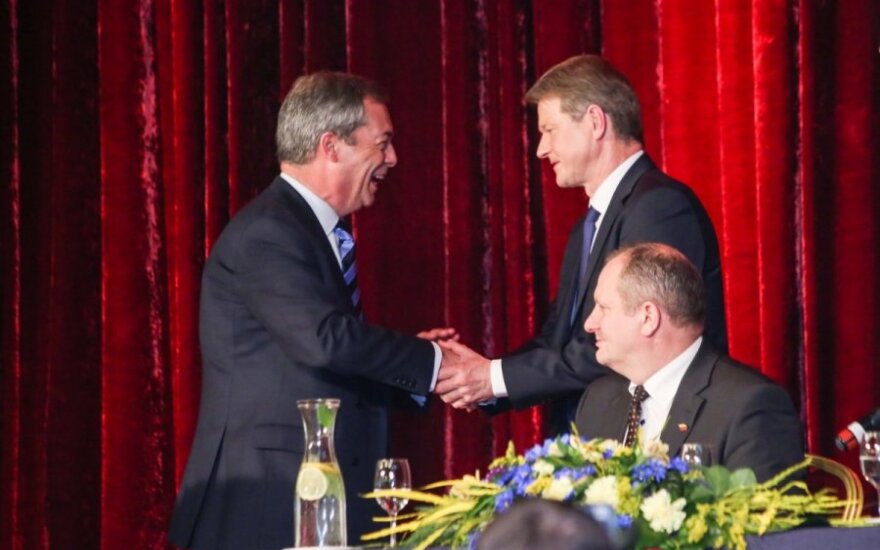 UKIP is fundamentally a racist party made up of a motley crew of bigots, misguided nationalists with a strong naysayer streak, in addition to the usual mavericks and other assorted gadflies. UKIP does not have an economic policy, nor does it have a social policy. The party does have a manifest, but its elected members and the majority of extremists that make up the party know little about its content. Mr. Farage’s own German born wife has described party HQ as a freak show.

In lacking judgment, Mr. Paksas does not stand alone. Farage seems a master at lacking judgment in selecting candidates, which more often than not look like a bunch of loose cannons spewing whatever rants in all directions, sometimes all at once. It is, nevertheless, remarkable that in a time when politicians are among people’s least favourite individuals there is such an interest in Nigel Farage, Marie Le Pen and Vladimir Putin. Collectively they have a strong fascist streak. In fact, France’s Le Pen and Farage are active foot soldiers in Putin’s divide and conquer propaganda war levelled at the EU (and he West). All three are fascist nationalists, by schoolbook definition.

Asked which politician he admired most, Farage stated: “As an operator, but not as a human being, I would say Putin. Not that I approve of him politically.” (The Guardian, 31 March 2014). Putin’s ‘operations’ are certainly something most of the free world can do without.

Former British prime minister Gordon Brown during the 2010 election in the UK was caught off guard by an open microphone when he, rather bluntly and correctly, called an elderly woman that had made racist remarks about immigrants ‘a bigot’. It was a turning moment in a campaign that had gone well up to that point. More than anybody else, Brown knew what Central and Northern Europeans had contributed to the UK’s economy after the 2003 EU enlargement.

What is wrong in calling a bunch of racist, narrow-minded nationalists ‘bigots’? UKIP should not be accommodated, emulated, or tiptoed around the way David Cameron is trying to do in the UK right now. They should be confronted head-on and identified for the bigots they are. It does work. Voters in the Netherlands got tired of naysayer Geert Wilders’ Freedom Party after one parliamentary term of negativism and fascist rhetoric.

Former Belgian Prime Minister Guy Verhofstadt described Farage and his UKIP cohorts as the biggest waste of EU taxpayers’ money. Farage’s participation and that of his UKIP cohorts is among the lowest in the EU parliament. In roll call votes, Farage is present less than 43%. Compare that to 95% for Gabrielius Landsbergis and 90% for Verhofstadt.

Nigel Farage expressed his surprise that Lithuania was adopting the euro in a recent interview, whilst making statements about borrowings and banking in Lithuania. As usual, his tongue was working faster than his brain. He appeared completely unaware of the fact that the currency had already been pegged to the euro for more than 10 years. Nor did he seem aware of Lithuania’s effective austerity policy in dealing with the 2008-9 crisis. He also did not seem to realise that nearly all Lithuanians had bank accounts with foreign banks operating in the country.

That is not a surprise, given that Mr. Farage, in spite of his background, does not pay attention to economic factors or policy matters. The party has none. Nor does it have a social policy. He has a ‘kick-out the immigrants’ policy (not sure how he is going to do that - cattle car style?) Mr. Farage does not seem aware of the contribution that immigrants make to the UK’s economy. There would simply be no cars built at Land Rover-Jaguar without Polish welders putting the basic frames of the cars together. There wouldn't be a hospitality and catering industry in London or most other UK cities without EU immigrants. Even the UK’s disproportionately large financial sector would hardly operate without EU immigrants. Nigel Farage, in his narrow mind, as so many Euro-sceptics in the UK, sees his island-nation floating far more west in the Atlantic Ocean then the less than 20 minutes Channel ride that separates Dover from Calais in France.

Populist Nigel Farage panders to the ignorant and bigoted 15% of the society. In his constant, mainly misguided attacks on the EU, he plays clearly into Putin’s anti-Western cards. Mr. Paksas should take note before inviting one of these characters who have expressed admiration for Putin to his party events in the future. Lithuanian voters should rightfully question why Rolandas Paksas sits in the same EU parliamentary block as Mr. Farage.

The leader of the Euro-sceptic group at the European Parliament (EP), Nigel Farage , says that...